O’Mahony And Varley Ready To Return 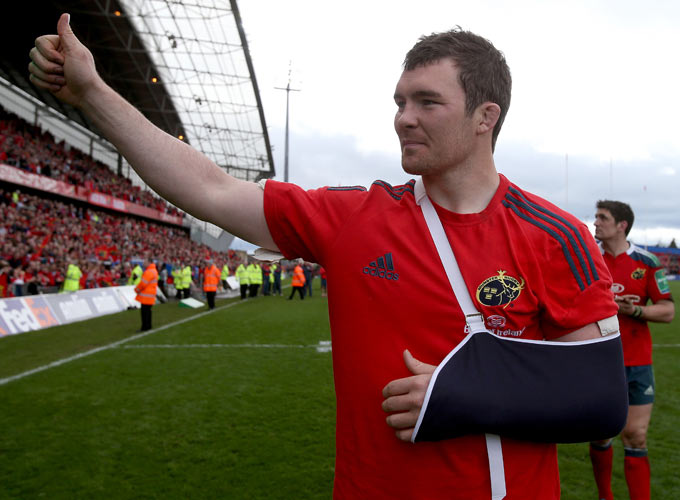 Head Coach Anthony Foley has named Peter O’Mahony and Damien Varley in his 23-man squad to face Leinster for tomorrow night’s round 5 Guinness PRO12 encounter at the AVIVA, ko 6.30pm.

Foley has made a total of eight changes to the starting line-up that faced Ospreys last weekend in Thomond Park, and in the replacements there is a welcome return for Munster’s squad captain Peter O’Mahony and Damien Varley.

Having successfully rehabbed from a double shoulder procedure squad captain Peter O’Mahony returns to a match-day squad for the first time since the Heineken Cup quarter final against Toulouse in April. While hooker Damien Varley is also included after rehabbing an ongoing foot injury and he is in line to make his first appearance of the season.

In the front row James Cronin and Stephen Archer come in at loose-head and tight-head respectively, while Duncan Casey makes his fourth consecutive start at hooker.

Dave Foley also returns to the starting line-up and partners Paul O’Connell in the second row.

The back row sees CJ Stander make the positional switch to blindside this week and he is joined by Tommy O’Donnell on the opposite flank and number 8 Robin Copeland who features in his first PRO12 Interpo derby encounter.

In the half backs, Conor Murray and Ian Keatley remain in situ from last weekend while Denis Hurley resumes his centre partnership with Andrew Smith who is promoted from the bench.

Andrew Conway retains his place on the wing and he is joined by Simon Zebo and Captain Felix Jones in the back three.

Munster enjoyed a three try win over Leinster in Round 5 of the Guinness PRO12 tonight, overcoming their interprovincial rivals on a scoreline of 23-34 at the AVIVA Stadium.

A nervy start from Munster saw them penalised at scrum time with Ian Madigan registering the opening points of the game for Leinster. Despite the kicking boot of Ian Keatley levelling matters just minutes later, the hosts again pulled ahead when poor ball ball control at the back of a scrum saw Munster carry the ball over their own 22. A Leinster penalty from the subsequent scrum made it 6-3 after 12 minutes.

However Munster were soon to hit their stride, managing possession better than in previous weeks, making good ground through the phases and always threatening the Leinster defensive line. Conor Murray was unlucky to be held up over the line on 14 minutes following some powerful carries from the Munster pack, most notably from Tommy O’Donnell.

Not to leave opposition territory unrewarded, Munster secured a penalty from the subsequent scrum and Ian Keatley was on hand to draw the sides level for the second time.

Munster were now on the front foot, winning the lion’s share of penalties, playing the game at great intensity and with the clinical edge that had been lacking last time out against Ospreys.

Once again James Cronin proved himself to be a serious ball carrier and the Ballincollig native was first to cross the whitewash for Munster after good phase play and quick recycling saw him take the ball at pace and touch down at full stretch.

Keatley was unable to add the extras but made amends on 24 minutes when he slotted his third penalty after Leinster infringed at the breakdown.

Munster continued to create opportunities both in close and out wide. On 31 minutes Conor Murray could have sent Simon Zebo over in the left corner but instead chose to keep it tight. Correct decision as when Leinster left the back of a ruck unguarded, Robin Copeland was on hand to pounce over the top and touch down for Munster’s second try of the night.

Madigan drew back three points for the hosts on 34 minutes when CJ Stander was penalised for not rolling away but their reprieve from Munster dominance was short lived as Ian Keatley beautifully predicted and intercepted a Jimmy Gopperth pass and there was no catching the fly-half who touched down under the posts on 37 minutes.

Adding the extras also, Keatley made it 9-28 at half time.

The second half saw the welcome return of squad captain Peter O’Mahony and hooker Damien Varley to the red of Munster after successfully rehabbing their respective shoulder and foot injuries. However the second 40 would also see Munster receive a total of four yellow cards and return the lion’s share of the penalties to the opposition.

Leinster emerged from the tunnel a far more composed and potent force from the side we had witnessed earlier in the evening. Damien Varley (lazy running) and BJ Botha (picking up the ball in an offside position) both saw yellow within minutes of each other and Leinster took advantage of the extra numbers, using the maul to good effect before striking in the midfield and sending Darragh Fanning in under the posts.

With Leinster now within two converted tries of the lead, Keatley showed composure to slot his fourth penalty and make it 16-31 after 66 minutes.

Chasing a losing bonus point at the very least, Leinster went to the maul again and when Dave Foley was adjudged to have bought it down intentionally, the Munster second row received his team’s third yellow card of the second half and Leinster were awarded a penalty try with 11 minutes to go.

With Leinster back within eight points of the opposition, the Munster pack stood up with it mattered most – winning a penalty from a defensive scrum, securing line out possession and winning another penalty from the subsequent maul. This time JJ Hanrahan was on hand to bisect the posts.

Despite a fourth yellow card for Munster on 78 minutes (Conor Murray for breakdown infringement), there was no way back for the hosts and the Munster front eight went on to finish on a flourish – securing another penalty at scrum-time and with that came the final whistle of the game.

Munster deserving winners at the AVIVA Stadium on a scoreline of 23-34. 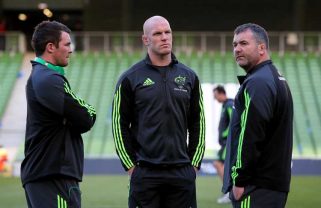