With a number of international representatives unavailable for selection, Anthony Foley has rung the changes for tomorrow’s Guinness PRO12 clash away to Cardiff Blues, with the Head Coach naming Donncha O’Callaghan as captain.

In total, 11 personnel changes are made from last weekend’s starting line-up that defeated Saracens 14-3 in Pool 1 of the European Champions Cup.

In the front row John Ryan returns from illness to start at loosehead alongside hooker Kevin O’Byrne, while BJ Botha retains his starting position at tighthead.

Munster’s most capped player Donncha O’Callaghan returns to the matchday squad and will captain the side from the second row alongside Billy Holland who is promoted from the bench for this weekend’s clash.

In the back row CJ Stander switches from 8 to 6, and following two strong performances for Munster A in the B&I Cup in which he scored two tries, Paddy Butler starts at 7. Robin Copeland is also promoted to a starting position as he faces his old Cardiff team-mates from the back of the scrum at 8.

In the half backs Duncan Williams and JJ Hanrahan are paired from the start for the first time this season at scrum half and out half respectively, while impressive appearances in all Munster A games to date this season sees year two Academy player Rory Scannell on course to make his first senior competitive appearance, doing so alongside Andrew Smith in the midfield.

Having trained with Ireland at Carton House earlier this week, Andrew Conway remains on the right wing with Gerhard van den Heever coming in on the opposite flank, while Johne Murphy also returns to the starting line-up, completing the back three at full back.

Following his inclusion in the Ireland squad for the upcoming November Series, Stephen Archer provides front row cover on the bench and year two Academy second row Sean McCarthy is another in line to make his competitive debut after being named amongst the replacements. Meanwhile, prop Alan Cotter and back-row Barry O’Mahony could also feature in the Guinness PRO12 for the first time this season.

This game will be televised live on Sky Sports 2. 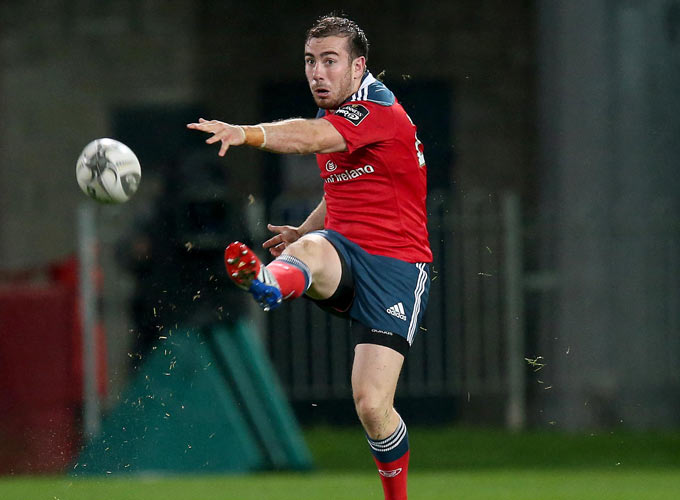 Munster wrapped up this block of games with a valuable win when they came from behind in the closing minutes to secure a 28-24 victory at the Arms Park today.

Cardiff seemed poised for their second win of the campaign when they went in front in the final quarter when man of the match number 8 Manos Vosawai got their second try.

But Munster, in typical fashion, finished strongly and Paddy Butler put the province back in front three minutes from time at the end of an eight-phase move which was kick-started by a storming Gerhard van den Heever break.

The try put Munster two points in front and replacement out-half Johnny Holland steered the tricky conversion in the blustery wind just inside the posts to leave Cardiff needing a try to win the game.

However, Munster held on in the closing moments to secure victory with a side which showed eleven changes from that which started against Saracens.

The foundation for the win came with the flawless kicking of JJ Hanrahan, who scored all seven penalties on an evening when the wind fluctuated throughout.

Hanrahan hit six of those kicks in the opening half to give Munster an 18-14 lead.

Fullback Rhys Patchell scored three penalties for the Blues with winger Lucas Amorosino getting the opening try of the match after 33 minutes.

Patchell was unable to land the conversion which left a point between the sides, and Hanrahan pushed this out to four with another penalty.

Cardiff enjoyed enormous possession in the second-half but the Munster defence was top class and Anthony Foley’s men struck a telling blow when they defended and then crucially turned over a number of Cardiff scrums five metres out.

Cardiff got in front in the final quarter but it was Munster who finished strongly to secure the points away. 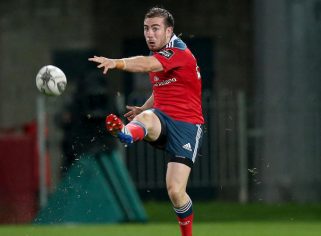