O’Callaghan Starts As One Of 8 Changes 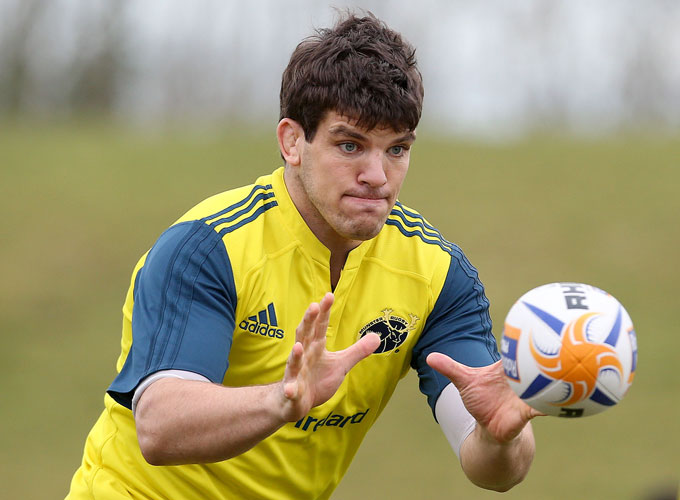 Donncha O’Callaghan joins Donnacha Ryan in the second-row for the trip to Scarlets tomorrow night as one of eight changes to the Munster side that beat Ospreys last weekend with James Coughlan captaining the team.

There are four changes in the backs with Duncan Williams taking the place of Cathal Sheridan at scrum-half after the Sligo man broke a bone in his forearm last week with Ian Keatley remaining at out-half.

The IRFU and Munster Rugby are delighted to announce today that Williams has signed a one-year contract extension that will see him stay with the province until June 2015.

The academy graduate moved on to a full contract at the start of the 2010/11 season and the 27-year-old has since made a steady progression providing invaluable experience in a key position.

Johne Murphy and Gerhard van den Heever are both drafted into the side on the wings with Simon Zebo moving to full-back.

Denis Hurley comes in at first centre with Casey Laulala keeping his place at second centre.

Two of the four changes in the forwards involve the front-row with Irish international props Dave Kilcoyne and Stephen Archer joining hooker Duncan Casey who maintains his place to make his fifth start for the province.

O’Callaghan and Ryan make up the second-row and CJ Stander takes the place of Sean Dougall in the back-row with Tommy O’Donnell keeping his place and Coughlan captaining the side from no.8 once again.

Gerry Hurley, JJ Hanrahan and Ronan O’Mahony are the three backs named in the replacements.

Munster face Scarlets at Parc y Scarlets on Saturday at 6:30pm. The game will be televised live on RTE and S4C with live updates here.

Munster are back in action at Thomond Park next month with more details here. 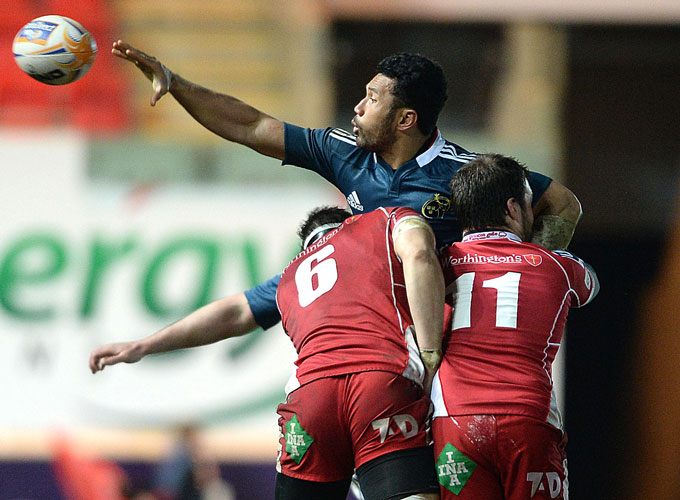 Munster’s five-game winning run came to an end at Parc y Scarlets as they fell to a frustrating 18-13 loss to the Welsh side with a losing bonus-point providing some consolation.

A John Barclay try in the 51st minute was enough to secure the win for Scarlets after a Gerhard van den Heever try had given Munster a 13-8 half-time lead.

Munster had to withstand some early pressure from a fired-up Scarlets and spent nearly all of the opening ten minutes in their own half with the home side taking a deserved lead through an Olly Barkley penalty in the 13th minute.

The Munster response was immediate as Scarlets were penalised for not rolling away after a Dave Kilcoyne charge and Ian Keatley levelled the scores with a well-struck long-range penalty in the 15th minute.

After that brief foray into the Scarlets half, Munster were again forced onto the back foot but some excellent defence kept the Welsh side at bay.

The home side took the lead with the first try after 26 minutes when a misplaced pass had Rob Penney’s side back under pressure and it eventually told when scrum-half Gareth Davies peeled off a maul and weaved past three Munster defenders to touch down in the right corner.

The try was awarded after a consultation with the TMO with Barkley narrowly off-target with the difficult conversion.

Munster went in front completely against the run of play in the 36th minute when South African flier Van den Heever pounced on a Barkley drop in midfield to sprint in under the posts and Keatley added the extras to give Munster a 10-8 lead.

Scarlets prop Phil John was penalised for going off his feet right on the ‘22’ at the end of the half and Keatley added another penalty to make it 13-8 at the break.

Keatley missed a difficult penalty from the right at the very beginning of the second half after referee Dudley Phillips adjudged Jonathan Davies to have taken out Van den Heever as they competed for the drop-out.

Scarlets closed the gap to two points in the 50th minute when Aled Thomas knocked over his first penalty after more Scarlets pressure and the home side hit the front a minute later when a Duncan Williams pass was intercepted by Barclay and the Scottish international showed great pace to run half the pitch and dive over in the left corner. Thomas’s conversion made it 18-13 to Scarlets with half an hour remaining.

Munster produced the move of the match in the 60th minute with Casey Laulala initially making the break on the left wing deep inside his own half. Great hands by both the backs and forwards saw the ball brilliantly moved 50 metres up the field with Laulala eventually chipping the ball out to Van den Heever but the bounce was unkind and the opportunity was missed.

Williams nearly crossed shortly after with Van den Heever going over in the corner after a looping pass from substitute JJ Hanrahan but the try was ruled out for a knock-on in the build-up.

Munster were really building up a head of steam now and Scarlets’ Josh Turnbull was sin-binned for careless use of the boot and only desperate last-ditch defence from the 14 men kept the hosts in front as the game approached the final ten minutes.

The visitors had a number of scrums under the Scarlets’ posts in the 70th minute but the home side managed to weather the storm and see out the final minutes to secure their third win in a row and maintain their play-off push. 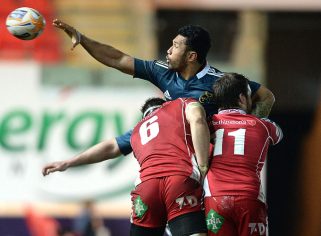