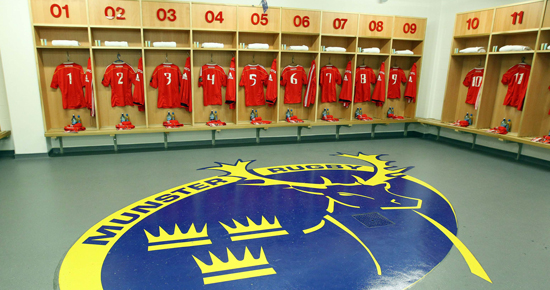 Dylan Hartley and his Northampton Saints travel to Limerick and Thomond Park Stadium more in confidence than hope believing they left a game behind them last time and determined to put that right on the occasion of the quarter-final of the Heineken Cup.

Their number 8 Roger Wilson believes that the the January visit leaves them well placed to advance to the semi-final in their continuing quest for Triple glory this season having already captured the LV trophy.

"The good thing for us," he says," is that we know what to expect going over to Thomond Park. Last game was close, 12-9, last time we went over. The atmosphere can get to you, sort of inhibits you from playing the way you want to play. Maybe stops you thinking at crucial times and you maybe go into your shell a little bit.

"We were guilty of that so this time we know what to expect and it’ll not affect us too much this time."

Northampton’s stated ambition is to add the Heineken Cup and Premiership title to the LV trophy according to Wilson. "That’s the plan. I don’t see why we can’t do it. Just continue that winning mentality."

However he does acknowledge that tomorrow’s game presents a huge challenge. "Munster have rightfully been the best team in Europe over the past five, six seven seasons. They’ve won Heineken Cup, Magners titles. They’ve only lost once in Thomond in the Heineken. That how difficult it’s going to be.

"But we believe we can do it if everyone of the squad gives absolutely 100%. plays a little bit more with the head this time and just as much heart."

The Saints, second in the Premiership table, will be dealing from a full deck and content in the knowledge that they have the type of game that will take them through to the semi-final. This time around they prefer Stephen Myler to Shane Geraghty at out-half. Geraghty who did such damage in Franklin’s Gardens bore the brunt of the criticism for Saints’ defeat last time they visited.

For their part Munster will be under no illusions about the task they face on Saturday evening. In losing the away Pool game, in the early stages, they made Northampton look fairly awesome but then came back to almost snatch victory. In the return, at Thomond Park in January, the English side led them a merry dance for long periods, but like others before them, most recently ASM Clermont Auvergne, they paid for being able to put the team in red away.

Munster will know that they have to cut out the errors and lower the penalty count that has cost them dearly in recent games.

They’ll know too that they will need to reproduce the sort of performance that they delivered in Perpignan if they’re to see off what is going to be a massive challenge. 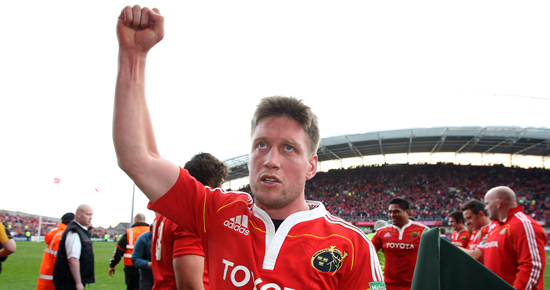 Munster are through to their ninth Heineken Cup semi-final following a pulsating and deserved victory over 2009 European Challenge Cup winners, Northampton Saints, at Thomond Park today.

Two tries from All Black legend, Doug Howlett, helped seal victory for Tony McGahan’s men, who can now look forward to a semi-final date with Biarritz in San Sebastien on the May Bank Holiday weekend.

This was the third meeting between the sides this season, each posting a win apiece from Pool One of the competition, but Munster proved the more determined and more clinical side in this quarter-final clash when a packed Thomond Park again acted as the perfect 16th Man.

Ireland international scrum half Tomas O’Leary gave a man of the match performance setting up two crucial second half tries for Springbok centre Jean de Villiers and New Zealander Howlett, and condemn the Saints to their second defeat at Thomond this season.

Despite making a dream start, Munster still trailed the visitors at the break but resumed in determined fashion, dominating possession and territory with skipper Ronan O’Gara dictating affairs with the boot and milking the touchlines tremendously out of hand.

The Reds’ pressure game paid dividends as the Saints failed to generate any go-forward ball and only fleetingly threatened the Munster line during the second period.

Munster meant business from the first whistle and earned a penalty inside a minute, which O’Gara converted, and, five minutes later, Paul Warwick cut the Saints’ defence to shreds taking a sumptuous pass from Keith Earls to run over. The ground work was done by the forwards, who mauled the ball inside the Saints half before O’Leary distributed wide to Earls.

The visitors, however, didn’t lie down and, by the 17th minute, had narrowed the gap to two points thanks to two well-struck penalties from their impressive No 10, Stephen Myler.

The home side’s first try arrived in the 23rd minute, when from a ruck near the Saints line, O’Leary fed O’Gara who gave a brilliant cut-out pass to Howlett, allowing the New Zealander spin out of an attempeted Bruce Reihana tackle to touch down.

O’Gara missed his second conversion of a half Munster dominated, but the Saints’ spirit was exemplified in a move close to half time that saw Jon Clarke canter over and Myler’s conversion gave the English side a surprise 16-13 lead at the break.

All of Munster’s experience in this competition was shown int he second period when they battened down the hatches, dominated the opposition up front and finished try-opposrtunities clinically.

The first of the second half arrived in the 53rd minute: O’Leary did brilliantly off a scrum, 15 metres from the line, taking a pop pass from James Coughlan before switching to Jean de Villiers who came steaming through the middle crashing through four Saints players to touchdown.

O’Gara added the extras and, though Myler notched a penalty almost from the restart, Munster re-asserted themsleves and piled on the pressure mainly through O’Gara’s masterly boot in open play.

The outhalf added two more penalties in the 58th and 67th minutes before Howlett added the coup de grace in the 76th minute taking a splendid O’Leary pass to dot down in the corner, a score converted by the in-form O’Gara. 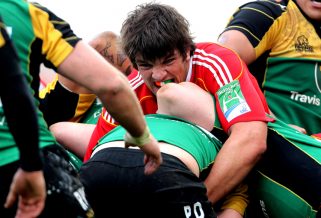 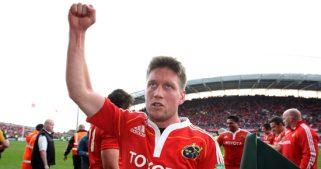