Munster Up Against It

Despite a defeat last week-end on a similar scale to Munster’s, Edinburgh are determined to get their RaboDirect PRO12 campaign off on the right note this evening.

Last time the sides met here in Murrayfield , almost a year ago, Edinburgh won a tad more comfortably than the 29-14 final scoreline suggests, Munster’s only try of that game scored with just seven minutes of normal time remaining.

The good news for Munster is that this evening, there won’t be too many running out with the scars of that defeat troubling their souls. Just two of the backs Ian Keatley and Denis Hurley and two forwards, Paddy Butler and Wian du Preez, were in the starting line-up 11 months ago.

However, if they perform this time around as they did that day, in fits and starts, they’ll come up short against a Michael Bradley side that includes eight of those who started in the Heineken Cup semi-final against Ulster.

Munster are a side very much in transition as evidenced by their pre-season games and coach Rob Penney will probably be just as interested in performance as anything else. His side can only be contenders if they manage to cut out a lot of the errors that have littered their games to date.

Although he has still to operate without most of the summer tourists, there’s plenty of experience sprinkled throughout his ranks and although it would be reasonable to expect to it to take a number of games before new players and new combinations gel, the indications that that process has begun should be evidenced this evening.

Under the cosh for periods of the first half when they twice trailed, albeit thanks to their own errors – not to mention the searing pace of Tim Visser – they responded magnificently to draw level by half time and then never relinquish the lead Ian Keatley gave them when he tapped over a 43rd minute penalty.

Visser's second try would have severely dented the morale of most sides given that it started as Munster drove for the Edinburgh line in a move that looked certain to yield a try. However, they somehow coughed up possession for the home side to go the length of the pitch for a try and 10-3 lead.

Captain Doug Howlett provided the inspiration for the equaliser, first with an incisive break and then his deft chip landing nicely for Keatley to snatch from under Greig Laidlaw's nose to dot down under the posts.

Ten all at half time, Howlett, in his first game as captain, part of an impressive back three, and leading by example, with Damien Varley, Paddy Butler, Donncha O'Callaghan and Sean Dougall, all carrying strongly, the South African pair Wian du Preez and BJ Botha also more than willing to share the load and James Downey thunderous in the centre, the indications were that Edinburgh would be made to work hard to achieve the victory most had predicted beforehand.

However, it was Munster who took the initiative right from the restart. Keatley, a commanding presence throughout, kicked them ahead after just two minutes and added the extras when Luke O'Dea scored under the sticks on 58 minutes after Downey had made the break and then brilliantly off-loaded for O'Dea coming on a superb line off his wing for a try that had backs coach Simon Mannix punching the air in celebration.

Denis Hurley had to be quick and brave to stop Visser slipping by on the left hand touchline before Keatley made it a ten point game with eleven minutes to go.

As was to be expected Edinburgh came looking for redress and put themselves in position to snatch at least a draw when Visser scored his third try with seven minutes left on the clock.

And they spent that seven minutes inside the Munster 22 and managed to get to two metres of the Munster line on three occasions. But they never managed to cross the whitewash.

Because Munster were determined they wouldn't. 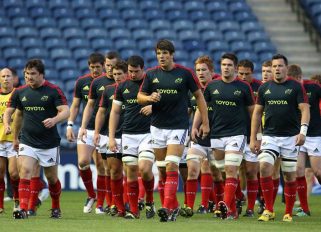