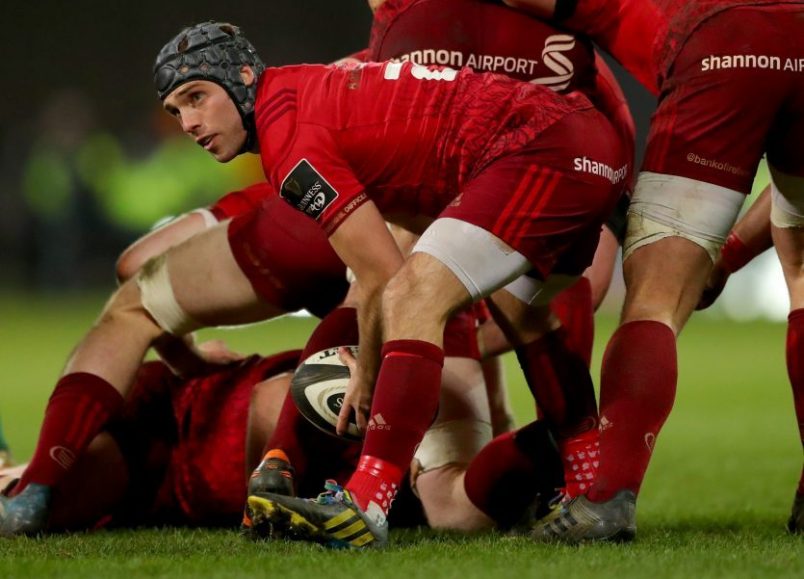 Duncan Williams is set to make his 150th Munster appearance

The Munster team to face Zebre at Thomond Park tomorrow night in the Guinness PRO14 has been named by Head Coach Johann van Graan.

There are 12 changes to the starting XV that overcame Castres Olympique 48-3 in the Champions Cup last time out with captain Billy Holland maintaining his place along with Simon Zebo and Jean Kleyn.

Scrum-half Duncan Williams makes his 150th Munster appearance and is partnered in the half-backs by JJ Hanrahan.

Seventeen of the 23-man squad are products of the Munster system with all but two of the squad Irish-qualified.

The back three is made up of Zebo, Darren Sweetnam and Alex Wootton – the province’s top try-scorer so far this season with seven tries.

Dan Goggin makes his first start of the season after recovering from a knee injury with Sammy Arnold also back in the side for his first appearance since New Year’s Day.

James Cronin returns from international duty to start at loosehead prop with Niall Scannell at hooker and Brian Scott at tighthead.

Holland is named in the second row alongside Kleyn as Jack O’Donoghue, Conor Oliver and Robin Copeland make up the back row.

John Ryan is among the replacements having featured in Ireland’s dramatic win over France in the 6 Nations last week with Ian Keatley and Rory Scannell also back from international duty.

Gerbrandt Grobler and John Poland are both in line to make their Guinness PRO14 debuts off the bench with Kevin O’Byrne, Jeremy Loughman and Dave O’Callaghan completing the replacements.

O’Callaghan is named in a Munster squad for the first time this season having recovered from a knee injury sustained last April.

In relation to Gerbrandt Grobler’s selection for the province, Munster Rugby and the IRFU wish to reiterate that Gerbrandt, as a member of the Munster squad and living by our values, will continue to be considered for selection during his time with the province, once deemed fit.

While some hold the view that rugby should provide no road-back for those that have taken a banned substance in the past, it would not be within the spirit and values of rugby to turn its back on every person that ever made a bad decision, having made restitution.

Irish Rugby is recognised as operating one of the most stringent testing environments of any rugby nation with a zero tolerance approach to doping in the sport. The province and Irish Rugby are fully supportive of all WADA and World Rugby anti-doping policies.

Gerbrandt Grobler served a two-year ban from rugby and returned to play for Racing 92 in November 2016 as per the process set out by World Rugby. 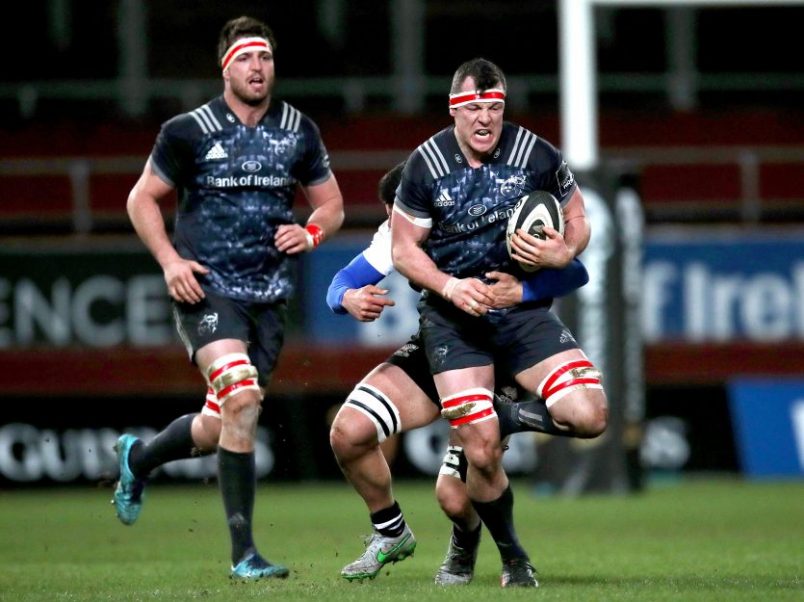 Man of the Match Robin Copeland on the charge against Zebre

Munster recorded a convincing 33-5 bonus-point win over Zebre at a blustery Thomond Park on Saturday night.

Munster had to repel a number of Zebre attacks early on as the visitors made the most of the strong wind at their backs with the pack doing especially well to defend a number of rolling mauls.

Arnold, fresh from signing a two-year contract extension, went over for the first try after 25 minutes. The centre showed great awareness and pace to spot the gap and burst for the left corner with Conor Oliver, another man to sign on the dotted line recently, providing the pass. Hanrahan’s touchline conversion drifted just right and Munster led 5-0.

When presented with a second opportunity as the half drew to a close, the hosts finished clinically as Brian Scott touched down off a well-executed rolling maul for his first try for the province as Hanrahan added the touchline conversion.

Zebre were unlucky not to score just before the break following a flowing move as Faialaga Afamasaga crossed but the try was ruled out for a forward pass and Munster led 12-0 at the interval.

There was a scrappy start to the second half with both sides struggling with the conditions and Zebre were deservedly back in the game on 52 minutes as scrum-half Guglielmo Palazzani broke off a five-metre scrum to score. The conversion was pulled wide and the Munster lead was down to seven.

That try sparked Munster into life and the response was immediate as they started to play with much more intensity and the result was two tries in four minutes.

First, Robin Copeland grounded the ball from the base of a ruck after Oliver had been halted just short of the line.

Replacements Ian Keatley and Rory Scannell then combined brilliantly for the bonus-point try with Keatley racing through a gap before offloading to Scannell to cross for a well-worked score. Keatley converted both scores and Munster led 26-5.

A second try for Arnold on 74 minutes put the gloss on the win as debutant John Poland, Kevin O’Byrne and Scannell combined to set up the score. Keatley slotted the conversion to seal a 28-point victory.

Duncan Williams made his 150th appearance for the province in the victory.

Gerbrandt Grobler and John Poland made their Guinness PRO14 debuts for Munster as replacements. 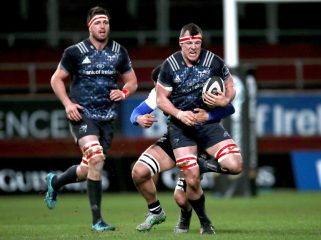