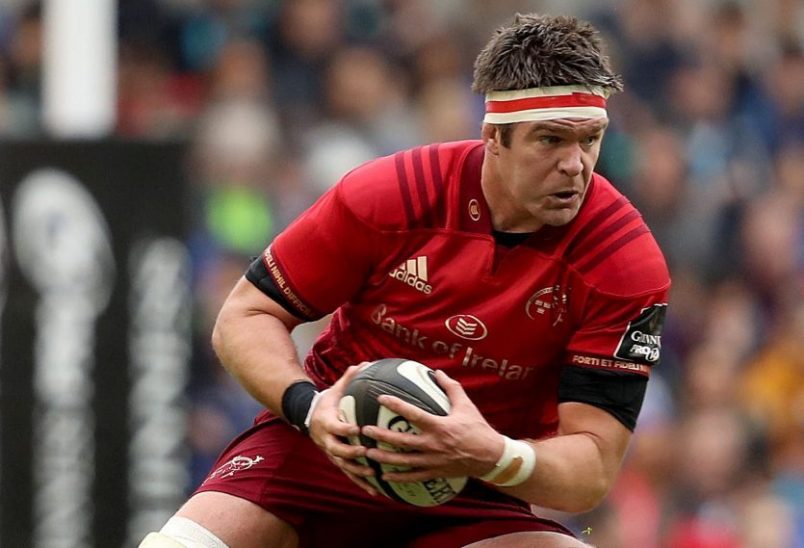 Billy Holland captains the side on his 180th appearance for Munster.

The Munster team to face Conference A leaders Glasgow Warriors at Irish Independent Park in the Guinness PRO14 on Friday night at 7pm has been named.

Tickets for the game are still available online here and from our ticket offices in Thomond Park and Irish Independent Park.

Billy Holland captains the side on his 180th appearance for the province as Head Coach Johann van Graan makes 12 changes to the team beaten in Cardiff last week.

Simon Zebo starts at full-back with Andrew Conway returning from Ireland camp to start on the right wing with Alex Wootton, Munster’s top try-scorer so far this season, on the opposite flank.

Sammy Arnold and Dan Goggin are the centres with out-half Tyler Bleyendaal and scrum-half James Hart completing the backline.

Jean Kleyn partners Holland in the second row. Flanker Dave O’Callaghan makes his first start since returning from a long-term knee injury as Chris Cloete and no.8 Robin Copeland keep their places in the back row. 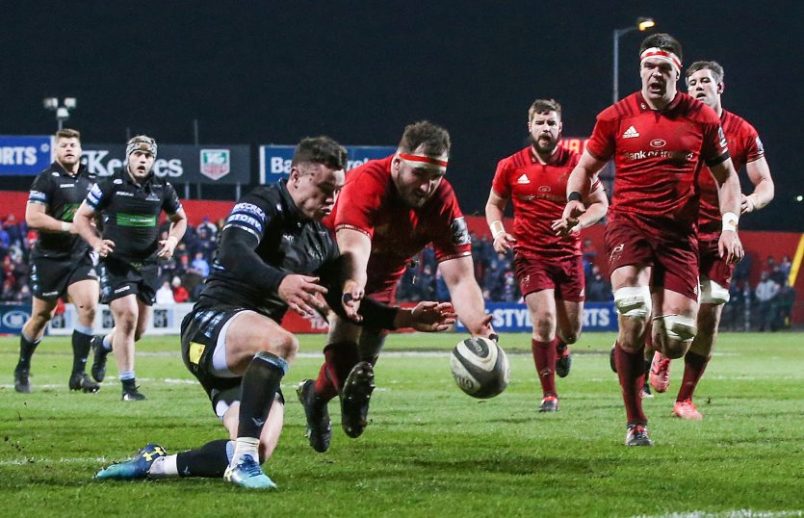 Niall Scannell and James Cronin scored the tries for Munster as they saw off Conference A leaders Glasgow Warriors in Cork tonight.

The province started well in a sold out 8,008 capacity Irish Independent Park with the scoreline reflecting the effort at half-time as they led 13-0 after Niall Scannell’s try and eight points from the boot of Tyler Bleyendaal.

Glasgow hit back through Adam Hastings kicks and George Horne’s well-worked try in the third quarter, however a solid performance from the home pack allowed the side to build on their good start and James Cronin’s try sealed the win, cutting the gap to the Warriors to 12 points.

Returning Ireland international winger Andrew Conway was a late withdrawal and he was replaced by academy winger Calvin Nash, with Darren Sweetnam moving onto the bench.

The men in red were 37-10 losers when these sides met at Scotstoun Stadium in Round 4 on 22 September, and taking on a side that only suffered one defeat in this campaign so far was always going to be a huge battle.

Bleyendaal, who was starting his first game since October after a neck injury, slotted the opening penalty in the tenth minute when Warriors broke the offside line when driven back to their tryline.

James Hart missed a second penalty attempt eight minutes later from distance, but Munster had the momentum and were able to build on it before the interval.

Next up the Munster pack pushed a rolling maul over the Glasgow line, and after a consultation with his TMO, Italian referee Marius Mitrea awarded the try.

Adam Hastings was on target for Glasgow three minutes into the second-half, and then Munster looked slightly vulnerable when George Horne scored after some loose defending in the build up.

With Hastings adding the extras the margin was reduced to three points, but James Cronin scored almost immediately after the restart following some quick thinking play from Rhys Marshall at the ruck, and Cronin was on hand to dart out of the blocks and pounce on the loose ball.

Calvin Nash almost scored but he put a toe in touch, and it was left for the impressive Bleyendaal to make sure of the win in the 62nd minute.

Guinness PRO14 Round 16 Round-up: Billy Holland captained the side on his 180th appearance for the province.

Academy winger Calvin Nash took the place of Andrew Conway in the starting line-up while Darren Sweetnam was added to the replacements.

Chris Cloete was forced to retire early through injury, and went to hospital after sustaining a knock to his arm in the opening minutes of second half. Niall Scannell will need to be assessed further for a knock he sustained.

Robin Copeland was awarded the man of the match.

Video | Simon Zebo played his last game in Cork and we heard from the fullback following the win. 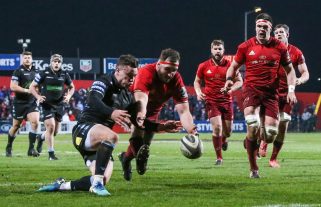