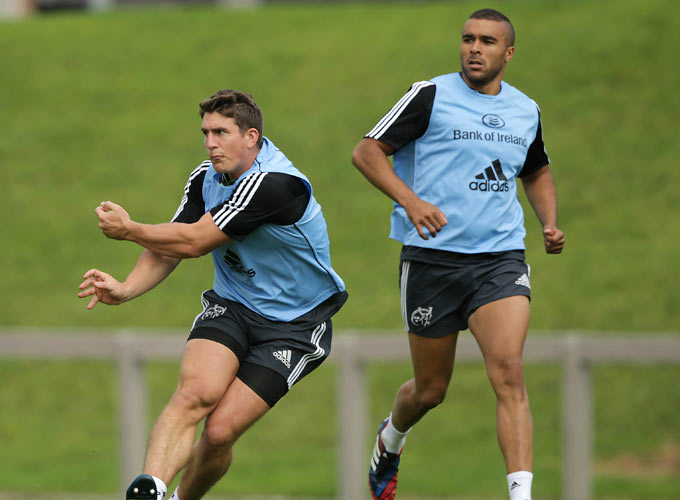 Head Coach Anthony Foley has named his squad for the opening round of the Guinness PRO12 against Edinburgh Rugby in Thomond Park on Friday night, ko 7.35pm.

Ireland’s Simon Zebo makes a return to provincial action on Friday night and he is joined by Emerging Ireland duo Andrew Conway and Ian Keatley in the starting XV, while their touring colleagues Dave Foley and Tommy O’Donnell are named in the replacements.

Foley has made six changes to the side that lined out against London Irish in Waterford last week with BJ Botha returning to the front row while Shane Buckley takes the place of Robin Copeland at no. 8.

Johne Murphy, Andrew Smith and Ronan O’Mahony retain their places in the backline but make the positional switches with Smith and Murphy linking up in the centre partnership while O’Mahony moves to fullback.

In sustaining a knee injury against London Irish Cian Bohane underwent a scan during the week and has been ruled out of action for the immediate future, he will now meet with the specialist for further assessment.

Tickets are available for the game online here and from the Munster Rugby ticket offices in Musgrave Park and Thomond Park.

Tickets will be on sale on match-day from the Mobile Ticket Office in the new Fan Zone Plaza from 9am. Please note that the North and South Terraces will remain closed for this game.

Munster started their Guinness PRO12 campaign with a disappointing 14-13 defeat to an impressive Edinburgh side at Thomond Park on Friday night.

CJ Stander crossed twice for Munster with Ian Keatley adding a penalty but a Jack Cuthbert try and three penalties from Tom Heathcote gave Edinburgh a first ever win at the Limerick venue.

Keatley had a late chance to snatch the win but his long-range penalty was just off target.

Edinburgh made the stronger start and out-half Heathcote, a late replacement for Greig Tonks, kicked the visitors into a fourth-minute lead after a Munster infringement in the scrum.

Munster looked rusty early on and could have been further behind after conceding a turnover but John Ryan saved an almost certain Edinburgh try with a superb ankle-tap on Fraser McKenzie.

And Heathcote stepped up again shortly afterwards to land another penalty from distance and Munster trailed 6-0 after nine minutes.

Munster started to click into gear as the game approached the 20-minute mark and Shane Buckley, who carried superbly, combined with fellow debutant Kevin O’Byrne to nearly cross for the game’s first try with some excellent Edinburgh defence keeping Anthony Foley’s men at bay.

The hosts were eventually awarded a penalty with Keatley electing to go for the corner but, although O’Byrne found captain Donncha O’Callaghan with the line-out, Edinburgh managed to force the turnover and clear the danger.

Edinburgh were reduced to 14 on 32 minutes when Tomas Leonardi was shown yellow for a late tackle on Simon Zebo.

And Munster took advantage within three minutes as Stander muscled his way over from five yards.

The try came after a Keatley penalty to the corner was mauled to within a yard of the line with Ryan giving the telling pass for the powerful South African to score Munster’s first try of the season.

Keatley dragged the conversion left but Munster were off the mark and now just a single point behind.

Edinburgh thought they had hit back immediately when Tim Visser crossed shortly afterwards but the try was ruled out by the video referee with Dougie Fyfe’s pass clearly forward.

The visitors did, however, claim the final points of the half with a third Heathcote penalty making it 9-5 to Edinburgh at the interval.

Munster made an electric start to the second half and Zebo was dragged down just short of the line after slicing through the Edinburgh midfield.

Hamish Watson prevented Munster from making a quick recycle and referee Leighton Hodges awarded Munster a penalty and sent Watson to the sin-bin just as Leonardi was primed to return after his yellow card.

Keatley went for the corner again and the forwards mauled towards the line but, although Munster were initially awarded the penalty, Hodges reversed the decision for dangerous play by the hosts and the chance was gone.

And Munster paid for that missed opportunity minutes later when Sam Beard’s perfectly weighted grubber kick was grounded by Jack Cuthbert for a first Edinburgh try. Heathcote missed the conversion but Edinburgh led 14-5 with half an hour to play.

Munster needed a response and Stander scored his second try of the night with 20 minutes remaining after one of the few decent spells of pressure in the Edinburgh half.

This time Duncan Williams, who had played a superb reverse pass to Zebo earlier in the move, popped to Stander and the flanker somehow managed to cross the whitewash despite the efforts of four Edinburgh defenders. Keatley missed the conversion but it was now 14-10 with 20 minutes on the clock.

And it was a one-point game with 11 minutes remaining when Keatley knocked over his first penalty after more good work by Zebo and Stander.

Edinburgh closed the game out well but Munster did have a chance late on when Heathcote missed a late penalty. The hosts ran from deep and were eight metres into the Edinburgh half when substitute Willem Nel gave away a penalty for killing the ball.

Nel was sin-binned and Keatley had the chance to claim an unlikely Munster win but his penalty sailed narrowly wide. 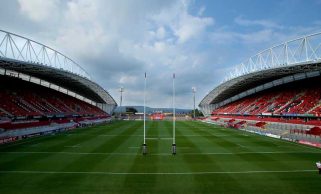