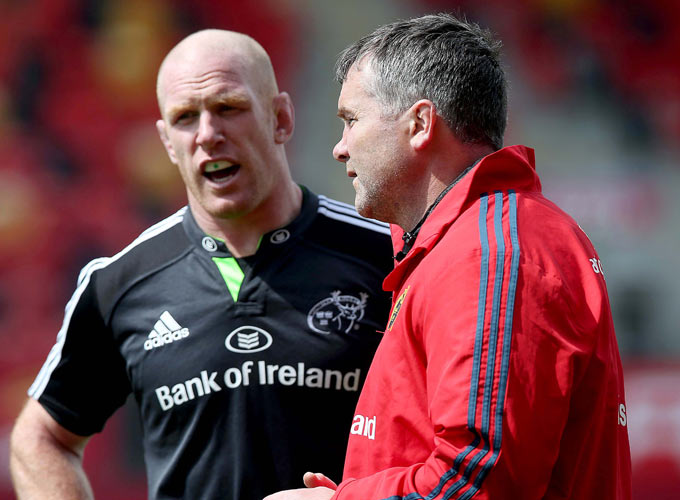 Head Coach Anthony Foley has made three changes to his starting XV for Saturday’s PRO12 battle against Ulster in Kingspan Stadium, ko 2.40pm.

As expected one of those changes sees Paul O’Connell return for the penultimate round as he partners Donnacha Ryan in the second row, with the Tipperary lock making his second start of the season. It is also the first time the players have started in the second row together since Perpignan away in December 2013.

The second change to the forwards sees hooker Eusebio Guinazu trading places with Duncan Casey this week, as the Argentinian international packs down with Dave Kilcoyne and Stephen Archer.

While the unchanged back row of Captain Peter O’Mahony, Tommy O’Donnell and CJ Stander complete the pack.

Denis Hurley is the only change to the backline as he joins Andrew Smith in midfield with Simon Zebo, Keith Earls and Felix Jones continuing as the back three.

Finally with the half-back pairing of Conor Murray and Ian Keatley remaining the same, Keatley will make his 99th appearance for the province on Saturday.

Honours Even At Kingspan Stadium 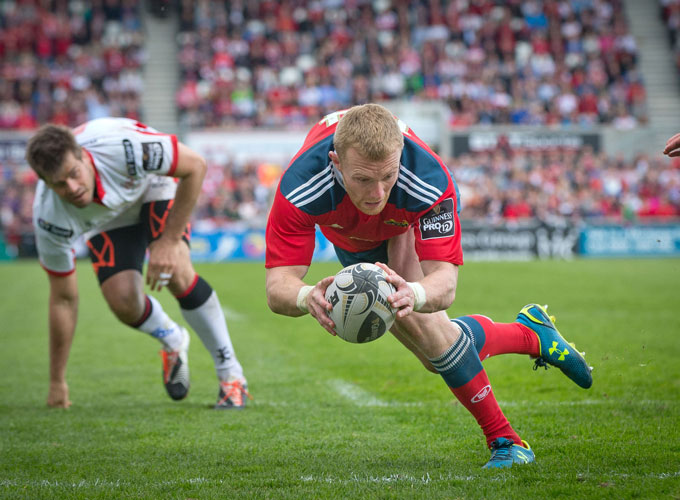 A dramatic finish to proceedings in Belfast this afternoon saw Ulster score a late converted try to share the spoils with Munster after Anthony Foley’s men impressed in this pulsating game – Keith Earls crossing for a try and Ian Keatley landing six penalties.

They were however unfortunate to lose Tommy O'Donnell and Simon Zebo to injury in the opening 40 with Jack O'Donoghue and Ronan O’Mahony taking their respective positions on the field.

The result sees the league’s top three teams – of which Munster are third behind Ospreys and Glasgow Warriors – head into the final weekend of regular league action tied on 70 points each.

Munster applied plenty pressure from the off, doing the basics right, going through the phases and making metres as they went. The home defence soon grew impatient and coughed up the opening penalty of the game which Ian Keatley landed on four minutes.

If Munster were threatening in their opening period of possession, the hosts were all that and more once they got ball in hand. Munster hold the best defensive record of the PRO12 this season and they needed to showcase all their defensive wares throughout the opening half as the impressive Ulster backs attacked with great purpose, Jared Payne in particular making good yardage.

With Munster’s defence stretched yet unyielding, the game's opening scrum penalty fell the way of the men in red, allowing them to clear their lines and grab a breather after a frantic opening for both sides.

On 17 minutes, Keith Earls once again demonstrated his attacking brilliance – scooping up the spilled Ulster ball, kicking ahead, following up with another deft chip, and was unlucky not to win the footrace as the ball went just out of reach for sufficient downward pressure.

With Munster forcing another knock on from the northern outfit, the front row of Dave Kilcoyne, Eusebio Guinazu and Stephen Archer showed dominance at set piece, winning two consecutive scrum penalties – the first allowing Munster to clear their lines and the second presenting Keatley with a chance to extend Munster's lead to 6, which he duly did on 33 minutes.

Munster, to many, looked like they were gaining the upper hand in this 'titanic' Belfast battle when Keatley added another three points shortly before the break (Ulster went offside at the breakdown), but the hosts had other ideas.

Just before the interval, the hosts got one back on their provincial counterparts at scrum time and Paddy Jackson got Ulster off the mark from the subsequent placekick.

And, just over a minute later, clever play from Iain Henderson as he ran at the Munster defence saw him draw in two Munster defenders before demonstrating a neat offload to the oncoming Tommy Bowe who exploited the well-orchestrated overlap to touch down for the opening try of the game.

With Jackson adding the conversion, a shell shocked Munster found themselves entering the dressing room 10-9 down.

With Ulster overcoming a nine pint deficit in a matter of minutes just before the break, it was they who looked the more assured performers at the restart and this was echoed on the scoreboard with Jackson adding his second penalty on 45 minutes.

However, still very much game-on for Munster, Anthony Foley's men soon regained their composure and good ball retention was rewarded on 53 minutes when Keatley added his fourth penalty.

New props, in the guise of John Ryan and BJ Botha, and same good result – Munster maintaining dominance in the scrum. In fact, three consecutive scrum penalties swung momentum firmly back the way of Munster, and with the third Ulster infringement within range of the posts, Keatley retook the lead for Munster (13-15) as proceedings edged towards the final quarter.

It wasn't just in the scrum that Munster wielded dominance, but in the line out too – efficient and accurate on their own put-in and forever asking questions of the Ulster effort, making a number of well executed steals.

Keatley and Jackson then traded penalties to set up a nervy final ten minutes for both sides with the red carding of Iain Henderson – for leading with the head when tackling Ronan O'Mahony – giving Munster the numerical advantage.

It was an advantage that paid dividends. The subsequent penalty saw Munster unsurprisingly opt for their ever effective line out maul. Side entry from Ulster on the first attempt brought Munster even closer to the try line with the second penalty. Then, keeping it tight at first, Conor Murray soon went wide to Keatley who fired a beautifully floated skip pass to Felix Jones who in turn found Earls on his right – the winger doing well to step inside the Ulster cover defence for the touchdown.

Off target for the first time all game, Keatley’s conversion attempt from a difficult angle went to the right and wide.

As far as the scoreboard and league connotations were concerned, things were far from over. A last minute penalty saw Ulster kick for touch and secure territory and possession well inside the Munster 22.

Initially drawing in Munster's defensive numbers through a series of phases, the Ulstermen then went wide, creating and exploiting an attacking overlap for the second time in the game – this time Paul Marshall dotting down.

Jackson did well to land the touchline conversion and give his side a share of the spoils – two league points apiece for Munster and Ulster.

The ever impressive and effective CJ Stander showcased again why he was voted Munster’s Player of the Year in recent weeks, picking up his sixth man-of-the-match accolade of the season.

Tommy O'Donnell (hamstring) and Simon Zebo (back) will be assessed by Munster medial staff in the coming days.

With the race still for a home semi-final about to reach boiling point, you can be there to get behind the lads in the final regular league game of the season!

Next Saturday, Munster welcome Newport-Gwent Dragons to Irish Independent Park in Cork for Round 22 of the Guinness PRO12. Join us on the #HomeRun for what has now become the most crucial game of the PRO12 to date!

Adult tickets from €;20 and great value family packs from €;40 can be purchased online here, from the Munster Rugby Ticket Offices at Irish Independent Park and Thomond Park or by calling 0818 719300. 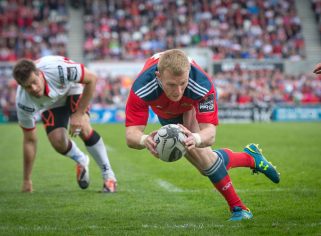 Honours Even At Kingspan Stadium