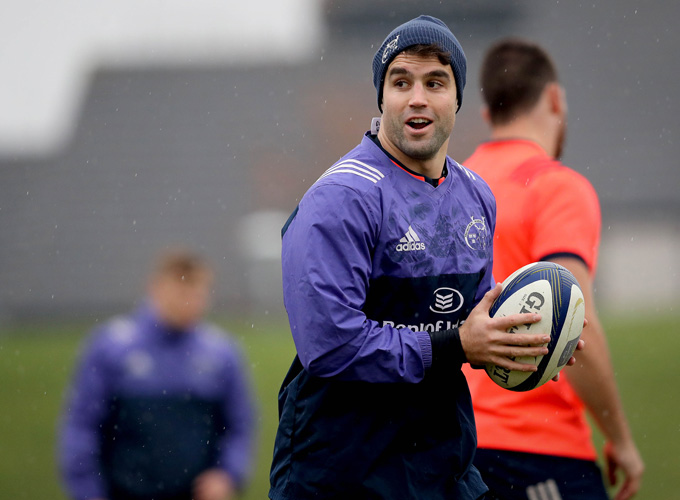 As part of two changes to the pack Donnacha Ryan and CJ Stander come into the second row and back row respectively, while four changes to the backline see Conor Murray and Tyler Bleyendaal take charge at half back with Keith Earls and Simon Zebo starting in the back three.

In making these changes, Erasmus keeps faith with the same starting XV that defeated Glasgow 38-17 in the Champions Cup back in October.

Should they feature from the bench tomorrow, new arrivals this season Rhys Marshall, Thomas Du Toit and Jean Kleyn will all make their European debuts.

Tickets can be bought online here, at the ground on matchday, or from the Munster Rugby Ticket Offices at Thomond Park and Irish Independent Park until 5pm today – 061 421103.

Ahead of tomorrow's big game, get the pre-match thoughts of Conor Murray and Munster legend David Wallace in our new official podcast, The Crooked Feed with Duncan Casey. 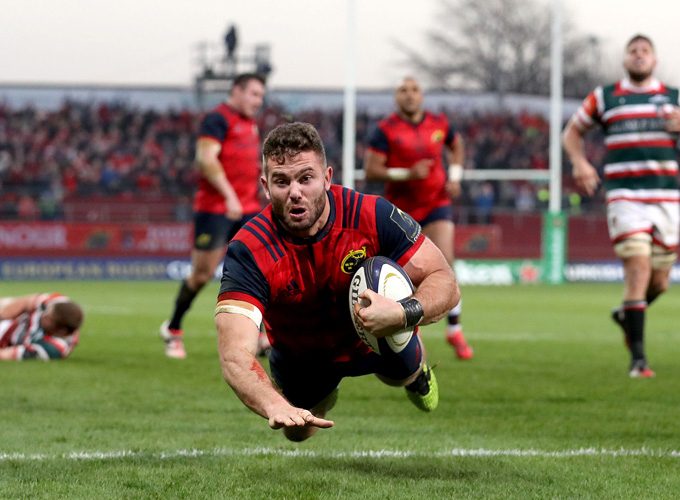 Avenging home defeats in 2007 and 2015, Munster were emphatic winners over Leicester Tigers this afternoon, doing so in front of a sold out and heaving Thomond Park and bagging maximum points from this round three Champions Cup encounter.

Tigers failed to fire a shot in an opening half that saw the ever impressive Tyler Bleyendaal land four unanswered penalties before Simon Zebo, with astute work from Conor Murray, gave the visitors an even bigger mountain to climb in the second half with a try under the posts on 36 minutes.

Leicester came out of the blocks with greater purpose upon the resumption, but Munster’s impenetrability in their own 22 planted a seed of doubt in Tiger’s minds that this might not be their day. That seed of doubt became a reality for the Premiership outfit when Jaco Taute bagged a brace by the 56th minute. Cardings for Manu Tuilagi and George Worth made a bad situation worse for Leicester with the final nail in the coffin coming in the form of a penalty try from referee Romain Poite.

A calm and assured start from the men in red saw them win the early territorial battle with a more accurate and effective kicking game – Bleyendaal, Murray and Darren Sweetnam in particular making excellent use of the boot, a tactic that was well complemented with Munster’s dogged kick chase.

Who else but man of the match CJ Stander made the first notable break of the game, scooping the ball at the back of a ruck and charging into the Leicester 22. Scannell brothers Rory and Niall were amongst those who brought the hosts ever closer to the line, but excellent body positioning from Lachlan McCaffrey made him an immoveable force over the ball and handed possession back to the Leicester men.

That passage however was a sign of Munster’s intent and was the spark that saw their sharpness in attack and prowess at the breakdown dominate the remainder of the half.

Such was the clinical nature of how Munster went about their business, penalties against Leicester were inevitable and Bleyendaal was there to ensure Munster got just rewards for their efforts. Demonstrating a masterclass in game management and placekicking, the New Zealander added four penalties – two long range – to hand Munster a 12-0 lead by the 27th minute.

Tigers only chance of points came through a penalty for Freddie Burns but the 10 was unable to convert the long range chance.

The Thomond Park crowd were in full voice on the half hour mark when Leicester's repeated infringements eventually saw Ed Slater sent to the bin. Munster took full advantage when Murray and Zebo conspired for the first try of the game.

More excellent phase play from the Munstermen planted them on the Tigers 5 metre line where Murray broke executed a beautiful no-look inside pass to Zebo. With the Leicester pillar defence sold a dummy, the Munster fullback ran in unopposed with Bleyendaal’s extras seeing Munster take a 19-0 lead into the interval.

With much to ponder in the dressing room, the visitors emerged a different side upon the resumption but Munster were having none of it. Massive line speed, choke tackles and Munster dominance at set piece soon took the wind out of Leicester’s sails and Munster then set about sinking that Leicester ship.

They did that through a brace of ties from fan favourite Jaco Taute. The South African scored his first soon after one of the finest mauls seen in Europe all season, the Munster pack making over 20 metres before quick recycling saw Murray fire a crisp pass to the oncoming Taute who took three Leicester defenders with him in crossing the whitewash.

Bleyendaal kicked the extras and was also instrumental in Taute’s second, his long looping pass from left to right finding Sweetnam whose textbook break, step and offload found the Taute and there was no stopping the centre. This time Bleyendaal was off target with the conversion, just his second miss of the game and in the European campaign as a whole.

Things were not to get any better for Leicester, Tuilagi deservedly seeing yellow on 58 minutes for a dangerous charge and a further carding five minutes later saw Munster awarded their bonus point try courtesy of some questionable defending from Chris Worth.

Chasing his hat trick, none other than Taute was impeded after he kicked ahead. Rather than waiting to see if the Munsterman had the gas to reach the ball before it went dead, Worth decided to tackle Taute off the ball, a move that saw the Leicester fullback finish out the game in the sin bin and allow Munster extend their comprehensive lead to 38-0.

Looking for a bit more respectability on the scoreboard, Richard Cockerill’s men fought to the end but it would be in vain. Stander and captain Peter O’Mahony both making crucial rips as the visitor’s tried to work up a head of steam in the Munster 22.

Tigers totally outclassed in every facet of the game today, Munster deserved 38-0 winners in front of magnificent home support at Thomond Park.

Tigers are a far better side than Munster allowed them to be today, Rassie Erasmus’ men can expect a massive backlash in next Saturday’s return encounter in Welford Road at 3.15pm.

Next Home Game:
Be there for the festive classic against Leinster in what is a top of the table clash in the Guinness PRO12.

After this afternoon's game MunsterRugby.ie spoke exclusively to Tyler Bleyendaal. 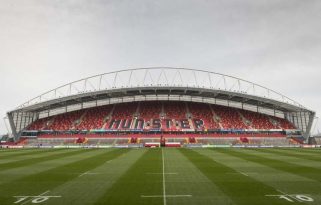 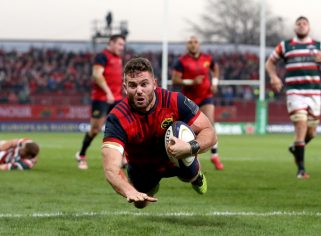