Munster Need To Crank It Up

Tonight in Musgrave Park Munster will be looking for a performance that will take them back into the top four of the RaboDirect PRO12 and leave them in good heart for the upcoming European fare.

Results last night saw Munster drop to sixth place in the table and they'll be mindful that last time a Welsh side visited Cork, a wretched perfromance reaped due reward.

On that occasion it was the Scarlets who gave them the runaround but since then Rob Penney's side have won three on the bounce in as positive a response as he could have expected and this evening he'll be looking for a continuance of that form even if it's once again a much changed side.

The likes of Peter O'Mahony, Simon Zebo and Donncha O'Callaghan are given a breather while illness or injury rules out Damien Varley, Dave O'Callaghan, Niall Ronan, Luke O'Dea and now Johne Murphy who had been drafted into the staring XV for O'Dea but has subsequently withdrawn with a hamstring injury and is replaced by Denis Hurley.

There is a return to the starting line-up for Keith Earls for the first time since the Saracens game in early December, Felix Jones and for Sean Dougall who limped out of the November 2nd game against the Blues at The Arms Park.

Dougall will renew acquaintance with team-mate from Rotherham Titan days Robin Copeland but his attention will be fixed by his opposite number Lions captain contender Sam Warburton and it's this pair along with skipper Josh Navidi who will pose a huge threat to the Munster rearguard.

Out wide there's the massive presence of Jamie Roberts, back in the starting XV for the first time since injury in the November internationals and he'll demand the closest of attention by Earls and co.

Relative League standings will count for very little this evening in a game where ultimate control may be wrested up front and the outcome very likely determined by Munster's kicking king in the ten jersey.

Two second half tries from Owen Williams and Robin Copeland consigned Munster to their second successive Musgrave Park defeat in the RaboDirect PRO12.

Last time around it was the Blues Welsh neighbours Scarlets who inflicted the damage though on that occasion there was the ever so slight consolation of a losing bonus. On Saturday however, in front of a near full house, there was no consolation whatsoever either in terms of the points table or overall performance.

Rob Penney's side did create chances but unforced errors destroyed any potential return and even at the end as they chased the score that might have given them a point, they again produced the mistake that allowed the Blues clear their lines.

It was all square at the end of the opening half, Ronan O'Gara and Rhys Patchell swopping penalties with the Welsh denied a try, after they broke out of their own 22, when Donncha Ryan managed to thwart Patchell as he looked to gather with the tryline beckoning.

By half time Munster had lost Conor Murray and Mike Sherry to injury and three minutes into the second half they went 10-3 behind after coughing up possession near half way for Williams to score and Patchell add the extras.

By this stage the fog had drifted over Musgrave Park to give a surreal aspect to proceedings that mirrored Munster's display. They had enough possession thanks to a solid set piece yet allowed the Blues to easily marshal their defence.

And it was the visitors who looked to have scored the deciding try when Jamie Roberts made inroads down the Stand side only to save Munster's bacon by throwing a forward pass to Williams with the line at his mercy.

The respite was brief because minutes later the impressive Copeland galloped over for a try and with Patchell adding the conversion it left Munster two scores behind. 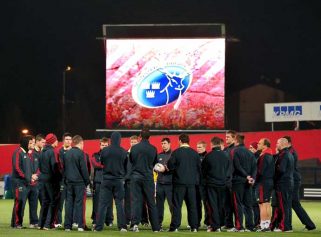