Munster Need To Be Wary 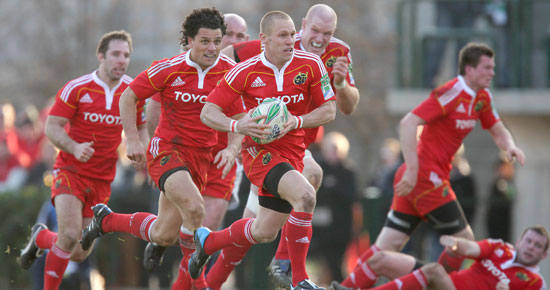 However, they need to be extremely wary against a starting XV shorn of the likes of Ian Humphreys, Stephen Ferris, Ruan Pienaar and his South African colleagues with the emphasis on the emerging talent such as Ian Whitten and Luke Marshall.

Rory Best returns from injury to the Ulster side while his rival for Ireland jersey, Jerry Flannery will be on the bench for Munster and expected to be introduced around the start of the final quarter.

With Ronan O'Gara being rested Paul Warwick takes over at out-half which means Scott Deasy comes into the full back berth and up front Denis Leamy also return after a weekend off and the Cashel man will captain the side.

Last night Ospreys missed the chance to close the gap on Munster when they went down 27-25 in Cardiff. That result leaves three Welsh sides chasing Munster.

That scenario is likely to change after today's round of games when Leinster – should they as expected account for Connacht at the RDS – will push their way into the top four so Munster need to keep the points board ticking over as the competition heavies start to position themselves ominously as the business end of the season begins. 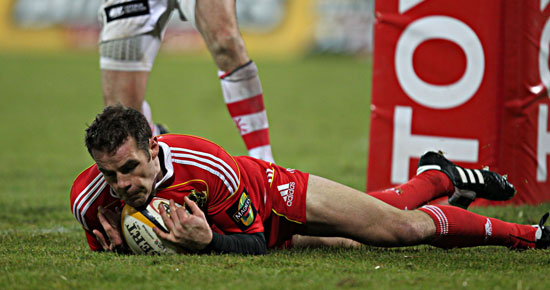 Three tries in the final six minutes earned Munster a bonus point 35-10 win over Ulster in front of a 16,000+ audience at Thomond Park Stadium.

Each of those tries was scored by replacements with the best of the night coming in stoppage time when Lifeimi Mafi finished off a move that originated inside his own 22.

But if that score was greeted with euphoria by the home contingent the night was marred by the sight of Jerry Flannery once again hobbling off right at the end. He had been introduced in the 53rd minute and contributed significantly to an overall improved Munster performance but early indications are that he's damaged the 'other' calf muscle and looks set for another spell in the treatment room.

Were Munster to be judged on their first half performance, gloom would be the prevailing mood in the province. They were flat in that opening period and fortunate to be trailing by just four points (10-6). It could and should have been more when scrum-half Paul Marshall tore open the Munster defence in a move that really should have added to TJ Anderson's 12th minute try. When Marshall was hauled down, Ulster recycled but tried to drive in close with a clear overlap out wide.

Afterwards Ulster coach Brian McLaughlin identified this period as a definite turning point. "Yes, had we scored then, it would have left it at 17-3, and who knows it might have had a bearing on the outcome. But credit Munster, they're patient and really very good in this kind of situation."

All Munster had to show for a dismal first half display was two Paul Warwick penalties and those after he had missed a fairly straight forward opener and a subsequent one from distance in the 20th minute.

At that stage Munster trailed 10-3 thanks to a Paddy Wallace penalty and his conversion of Anderson's well crafted 12th minute try – a score that would have had Tony McGahan and his defence team seething.

The half-time fare between the youngsters of Clonmel and Old Crescent entertaining was more entertaining than had been seen prior but Munster re-emerged with a different and more urgent cut to their jib and within three minutes the deficit was reduced to a single point when Warwick landed his third penalty to start off a near faultless second half kicking return.

Totally dominating, Munster went in front when Scott Deasy split the Ulster defence with a searing break that ended with a long Warwick pass finding Denis Hurley who crashed over in the left corner.

Their next try should have come a little earlier than the 75th minute when Keith Earls ignored an overlap having a cut himself, but recycled ball eventually ended up in Tommy O'Donnell's hands and minutes after he'd entered the fray the Clanwilliam man scored his second Magners League try.

Two minutes later Marshall lost possession on the half way line and Barry Murphy kicked through and comfortably won the race to gather and score.

To their credit Ulster never dropped their heads and, determined to deny the home side a bonus that had looked so unlikely, took themselves into the Munster 22 in search of a redeeming try.

They probed threateningly down the East Stand side and when they turned over possession just ten metres from the Munster line it seemed the game had seen its final drama.

However, Munster opted for one last surge. The ball was worked to the West Stand touchline, then back infield where Earls made a telling cut and Murphy got himself involved before Mafi added the finishing touch. 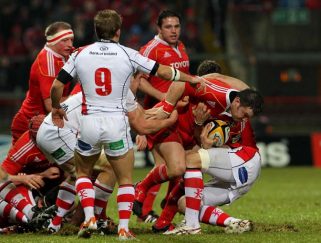 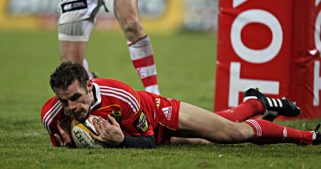