Munster Need To Be Wary In Dragon’s Den

Although there may be five places and 22 points separating them in the RaboDirect PRO12 table, there’ll be little to choose between Munster and Newport Gwent Dragons when they meet in Rodney Parade this evening.

The home side will be boosted by the return of Luke Charteris who makes his first appearance of the season in a Dragons shirt and he'll pack down with the experienced Rob Sidoli but by the same token they have Lewis Robling starting at ou-half for the first season.

Luke O'Dea comes into the Munster starting XV in place of Simon Zebo and the 21 year will prove more than adequate having shown in his four outings to date that he has a nose for the tryline, his two tries coming against Edinburgh and Ulster.

Save Tokula makes his debut in the centre, 23 year old Dave Foley partners O'Driscoll in the second row and James Coughlan, superb all season, has youngsters Dave O'Callaghan and Tommy O'Donnell either side of him in the back row.

The last five fixtures between the two teams have all been won by the home side on the day, whilst Munster have not won at Rodney Parade since the 7th of March 2009

And if that bald stat doesn't provide incentive enough for Tony McGahan's side then there'll surely be the desire to mark the occasion of skipper Mike O'Driscoll 200th cap in the best possible fashion.

And with the way results went last night a win for Munster will send them into clear second place in the table.

Munster brought a dismal record at Rodney Parade to an end on Saturday with a 24-14 win over a game and gutsy Newport Gwent Dragons side in the RaboDirect PRO12.

On a night that saw Mick O'Driscoll win his 200th cap, Munster had to come from behind and a man down – Tomas O'Leary sin-binned, harshly, in the 58th minute – for their first win at the venue in three seasons.

They trailed 11-9 at the break, went 14-9 behind and a man down but marshalled by skipper O'Driscoll came back to score tries through Luke O'Dea and Felix Jones for a ten point victory.

Afterwards, O'Driscoll preferred to talk about the team's, rather than his own achievement, "Look," he said, "it's great to reach the 200 mark, but the important thing about tonight's game was the four points.

"This is always a tough place to come, they're a hard team to handle and I'd be delighted with the way our lads hung in there."

That they did, owed much to their defence and a little dollop of lady luck, particularly around the hour mark. At that stage Dragons led by five and were laying siege to the Munster line on the Bisley Stand side of the pitch.

Munster resisted that assault but when the Dragons went wide left they completely buthered a three on two for a try that would have made a comeback extremely difficult.

As things turned out, Munster took heart from that let-off and levelled the match when replacement Denis Hurley shredded the Dragons defence and took play into the Dragons 22. Lifeimi Mafi stepped in to scrum half and another replacement, Scott Deasy, flung a long cut-out pass to Luke O'Dea who dipped low to score at the corner flag.

It was O'Dea's third try in four starts and he had a deal of work to do when he received the pass, yet showed speed and composure to dot down.

The second try, the one that killed off the Dragons, came when the Dragons put a ball to ground and Jones pounced and took off like an exocet to scorch in under the posts.

Besides ending their losing streak, the win took Munster into clear second place in the table, 12 points behind Leinster with a game in hand, and Leinster to visit Limerick at the end of the month. 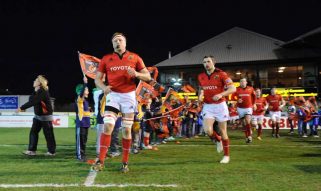