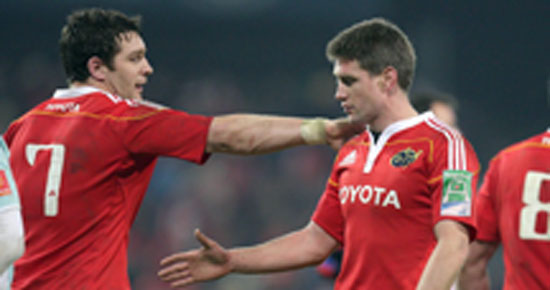 "Twould be a great country this if only they had the weather" was the rueful comment from a Munster supporter looking out from the porch of the Costa Vasca Hotel as the Munster forwards went about the line-out warm-up in the lashing rain.

And the conditions are expected to be much the same at the time this semi-final kicks off in the Anoeta Stadium where worked were furiously working since early morning erecting the posts and re-marking the pitch after last night’s soccer game there.

There was little evidence of the estimated 7000 Munster supporters that have traveled for this game but stadium officials say that at lunchtime today there were just 1500 tickets left to sell in the 32,400 capacity stadium.

Munster were forced to make late changes yesterday when both Doug Howlett and Ian Dowling failed to come through the Captain’s Run and Lifeim Mafi moves from the bench to take over from Dowling with Denis Hurley in for Howlett and Tom Gleeson on the bench.

Out of contention for a place in the Heineken Cup next year through their own domestic League, Biarritz must win today and then beat Toulouse if they are to compete in theis lucrative competition next season.

There is also the added attraction of making it an all French final but from a Munster point of view there will need to be a reproduction of the form they showed earlier against Perpignan and more recently against Northampton Saints if they are to deny the French and earn themselves a place in the final for the fifth time. 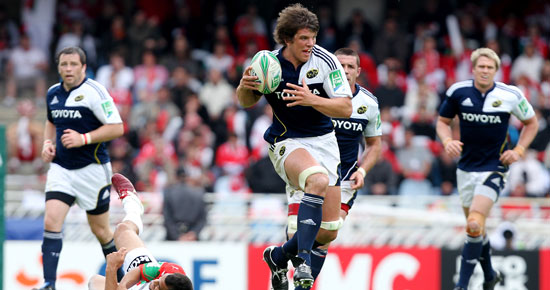 Munster’s Heineken Cup campaign ended at the penultimate stage when they were beaten 18-7 in San Sebastian’s Anoeta Stadium on Sunday in front of a 32,000 crowd.

It was a disappointing end to a day that promised so much as Munster opened brightly and led 7-0 after a well worked Keith Earls try was converted by Ronan O'Gara.

They went in at the break leading 7-3 but re-emerged to produce what was probably their worst 40 minutes at the knock out phase in their long proud history in this competition.

In that second half, their visits to the Biarritz half were rare events while their one opportunity to extend their lead came in the 54th minute when O'Gara's penalty attempt – from inside his own half – fell short.

But for all Biarritz's dominance it wasn't until the 64th minute that they managed to edge ahead, Dimitri Yachvilli landing his third successful penalty after Paul Warwick was badly caught as he attempted to run a ball out of his own 22. Six minutes later, another Yachvilli penalty put five points between the sides and effectively settled this contest.

This was certainly a game Munster looked well capable of winning on the evidence of the opening half when they harried and hassled the home side to good effect. They might have taken the lead in the 19th minute when Jerry Flannery made a great run deep into the Biarritz 22 and had his pass to the supporting O'Gara been a little softer the try was on.

Ten minutes later they got the reward for their adventure when after a storming run from Donncha O'Callaghan, Alan Quinlan carried on and when the ball was moved left James Coughlan delivered the prefect scoring pass to Earls.

O'Gara landed the tap-over conversion and up the end of the field moments later it needed Mick O'Driscoll and Denis Hurley to prevent Benoit August from scoring off a front of line-out move.

Earlier, August's intervention with a blatantly offside big hit on Jean de Villiers seemed certain to offer the opportunity for O'Gara to extend the lead but referee Dave Pearson ignored the plea and incredibly Munster were awarded just one penalty kick at goal in the entire game.

And if the Munster dressing room was a disconsolate place afterwards there was a quiet acceptance that they had been architects of their own downfall.

Besides that hard to fathom second half display, there was the performances by Yachvilli, August and Imanol Harinordoquy that set the tone for this Biarritz victory. If August was menacing all day, Harinordoquy was majestic in everything he did while Yachvilli was the maestro behind a dominant pack who exacted full return when Munster erred.

It was a disappointing end to a day that had started well and now Munster must somehow re-group ahead of the crucial game in Cardiff next Sunday. 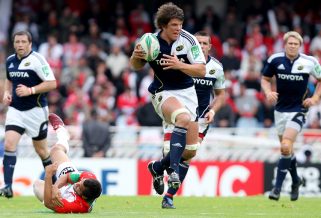 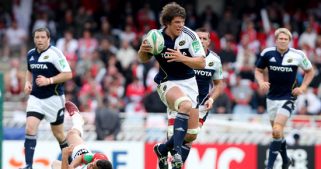