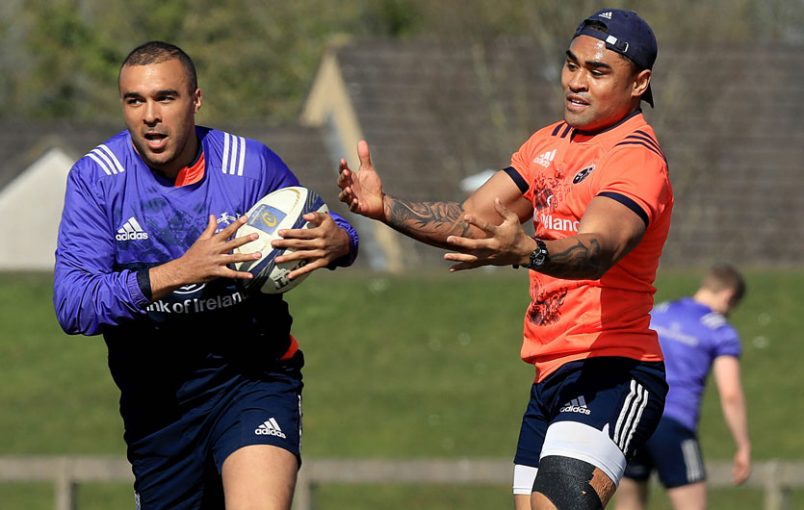 Simon Zebo & Francis Saili at training in UL during the week.

All five last lined out for the province in Munster’s round 6 Champions Cup game against Racing 92 at the end of January.

In an unchanged front row hooker Niall Scannell makes his 50th appearance for the province as he scrums down next to Dave Kilcoyne and John Ryan.

Donnacha Ryan joins Billy Holland in the second row as CJ Stander packs down at number 8 with Captain Peter O’Mahony and Tommy O’Donnell again on the flanks.

Conor Murray is named alongside Tyler Bleyendaal at half back while winger Keith Earls and fullback Simon Zebo complete the changes to the backline.

A further boost for the squad sees Francis Saili make an earlier than expected return from a knee ligament injury to be named in the replacements, while Dave O’Callaghan is named in his first European squad of the season.

Please note this a sell-out game with a Thomond Park capacity of 26200.  Tickets will not be on sale at the game.

Here what Tommy O’Donnell had to say ahead of the game, and check out Tyler Bleyendaal’s Champions Cup season so far with both videos available here. 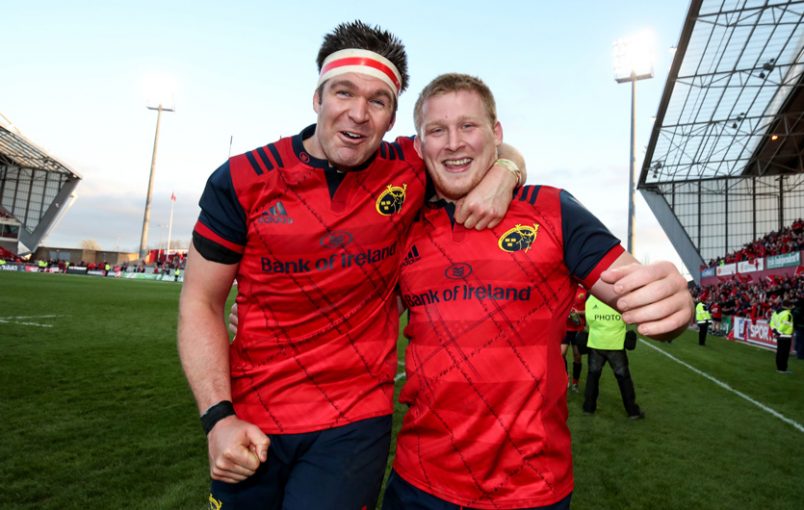 For the first time in three years, Munster are back in the semi finals of the European Champions Cup, their 12th in total, defeating Toulouse 41-16 in front of a packed and heaving Thomond Park.

The scoreline may have bettered the 2014 winning margin over Toulouse by one point, but make no mistake, it was very much edge of your seat rugby before two late tries from Darren Sweetnam and Andrew Conway eventually put the French giants to the sword.

Despite playing with a strong wind in the opening 40, Toulouse struggled to find their rhythm, not helped by man of the match John Ryan barging over with just a couple of minutes played.  That said, they were never far away, the gap never extending beyond 10 points in the first half and on the stroke of half time, Jean-Marc Doussain slotted his third penalty to leave Munster ahead by just four points at the interval.

A CJ Stander try gave the Munstermen some breathing room before a very questionable Yoann Maestri pass allowed Paul Perez bring the four-time champions right back into it.  But, as clinical in defence as they were in attack, Munster’s defensive line never gave an inch in the final 20, and on 74 minutes, Bleyendaal’s fifth penalty left Toulouse needing two tries.  Instead, those two tries came the way of Munster as the hosts put some polish on the scoreline and raced into the semi final against either Saracens or Glasgow Warriors.

With less than a minute played, Toulouse were down to 14 men, and paid the price on the scoreboard. Francois Cros’ cynical late hit on Duncan Williams sent him to the bin and Munster showed their intent.  A kick to the corner forced another penalty off the first maul and to the corner we went again.

A clean take from Tommy O’Donnell set up another strong maul before Munster, buoyed by the capacity crowd of 26,200, played astutely through the phases, Ryan sniping round the fringes with the TMO confirming the grounding was good.  Bleyendaal made it a full 7 point return.

The doggedness of the Munster pack also disrupted the Toulouse lineout early on and another unstoppable maul into the Toulouse 22 then forced the Frenchmen into bringing it down illegally.  This time Bleyendaal opted for the posts to push his side out to a 10-0 lead with less than 10 minutes on the clock.

An uncharacteristic Bleyendaal slice allowed Toulouse their first attacking opportunity in the Munster 22, but across 19 phases Munster held firm, forcing a knock on and clearing the danger.

A penalty on half way gave Florian Fritz a first shot at goal for Toulouse, his effort going well right, but Doussain made no mistake in front of the posts on 19 minutes as Munster failed to release the tackled player.

Joe Tekori’s over exuberance in the tackle then saw the lock go high on Dave Kilcoyne, Bleyendaal slotting the three, but that was soon negated as, again, Munster failed to release in the tackle with Doussain slotting his second penalty.

Munster came again, making excellent headway down the left wing and were unlucky to not to score when, after some ping-pong on the ground, the ball bounced favourably for Bleyendaal who touched down.  However, after consultation with the TMO and numerous camera angles, including ref-cam, O’Donnell was adjudged to have knocked on.

Instead it was the visitors who had the final say of the half, Munster playing the ball from an offside position, allowing Doussain land a long-ranger to make it all to play for in the second half.

Immediately going off their feet upon the resumption, Toulouse watched Bleyendaal land the kick of the game from half way to give the men in red a little more breathing room.

Continuing to apply the pressure, a well-executed kicking game from Bleyendaal and Rory Scannell kept Munster in the right places and a penalty kick to the corner on 46 minutes paid serious dividends.  A clever peel off the maul brought them beyond the 5-metre line, and from there, brutish phases would soon see CJ Stander crash over for Munster’s second.

The pressure on Toulouse also told in the form of ill-discipline and this time a dangerous tackle gifted Bleyendaal an easy kick in front of the posts.

That said, any hopes that this game was a done deal were soon dashed, Maestri’s break finding Perez down the left flank and the winger touched down in the corner on 56 minutes, despite the pass seeming very much forward.  Doussain’s conversion left just eight between the sides.

With momentum seeming to shift the way of Toulouse, Munster’s defence came to the fore yet again, successfully defending 15 phases off one penalty, before driving Toulouse back and forcing the knock on off a second just a minute later.

In contrast, a penalty for offside, slotted by Bleyendaal, nudged the province slowly but surely away from Toulouse, and they were out of sight just minutes later.

A massive hit from Jaco Taute saw the ball spill into the path of Sweetnam who dinked ahead, claimed and touched down, essentially making it game, set and match to Munster.

Andrew Conway’s late dart down the left wing, the icing on the cake!

The province will now face either Saracens at the Aviva Stadium or Glasgow Warriors at BT Murrayfield on 22/23 April.

Tonight’s win saw scrum half Angus Lloyd make his Champions Cup debut in red.  A late addition to the matchday squad following the withdrawal of Conor Murray (shoulder), Lloyd was a second half replacement for Duncan Williams who gave a stellar performance at half back, himself unlucky not to bag a try off a charge-down early on.

In noting the early departures, Rassie Erasmus said he was not overly concerned for Peter O’Mahony (dead leg), CJ Stander (ankle) and Keith Earls (back).  They continue to be assessed by the Munster  medical team. 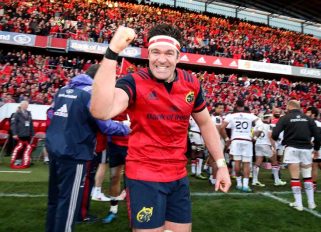 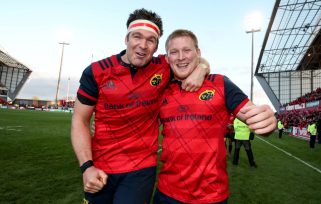