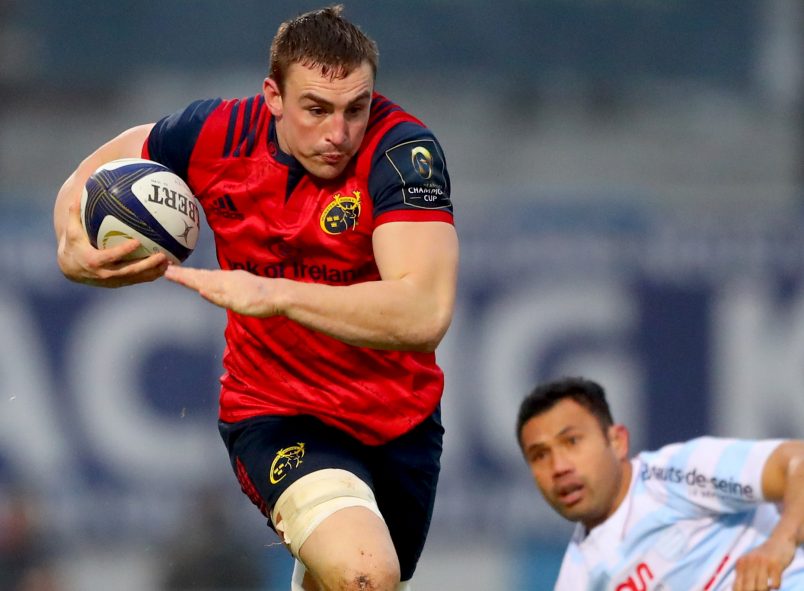 Director of Rugby Rassie Erasmus has made three changes to the Munster side for tomorrow’s sold-out Champions Cup clash against Racing 92 at Thomond Park (5.30pm).

Tommy O'Donnell, James Cronin and Ronan O'Mahony come into the starting XV as Munster target the win that would guarantee a home quarter-final.

O'Donnell returns from injury to start as Jack O'Donoghue moves to the bench and Cronin is given the nod at loose-head prop with Dave Kilcoyne moving to the replacements.

O'Mahony, Munster's top try-scorer so far this season, takes the place of Keith Earls in the only change to the backline with the Moyross man not included after taking a knock to his ribs in training earlier this week.

It's as you were elsewhere with Niall Scannell and John Ryan continuing at hooker and tight-head prop respectively.

Donnacha Ryan is partnered by Jean Kleyn in the second row with captain Peter O'Mahony, O'Donnell and CJ Stander completing the pack.

Conor Murray and Tyler Bleyendaal are again the half-back pairing with no change to the midfield partnership of Rory Scannell and Jaco Taute.

O'Mahony takes the place of Earls in the back three with Simon Zebo and Andrew Conway maintaining their places.

Zebo will be hoping to continue his outstanding try-scoring record against Racing that has seen Munster's record try-scorer touch down five times in three games against the Parisiens.

The game will mark Munster's 60th top-flight European Cup game at Thomond Park, the first of which took place against Swansea in 1995, with Munster losing just four of those 60 encounters at the Limerick venue.

This game is sold out. Tickets are no longer available and will not be available at the ground on match day. With the addition of extra seating, 26,200 tickets have been sold for this fixture.

Episode two of our new official podcast series, 'The Crooked Feed with Duncan Casey', is here. Again Duncan looks at all things Munster, both on and off the field, and is joined in Episode 2 by former Munster back row James Coughlan, Coach Felix Jones and Ireland Women's captain Niamh Briggs. 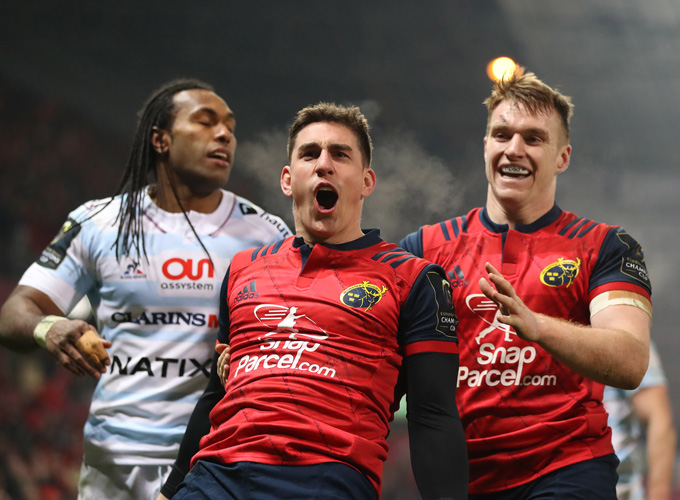 It’s wasn’t easy, but Munster secured a home Champions Cup quarter final for the first time in three seasons, defeating a defiant Racing 92 side 22-10 at Thomond Park this evening. Munster are now seeded second for the quarters following the conclusion of Pool 1.

The men in red's ninth home quarter final sets a new tournament record having previously shared the the spoils with Leicester Tigers on eight apiece.

Make no mistake Racing came to play and do their Assistant Coach Ronan O’Gara proud on his return to the ground where he guided Munster so many famous European wins. Starving Munster of the early possession, asking questions of the Munster scrum and running it from everywhere, Racing dominated the opening ten minutes. Maxime Machenaud missed an early penalty before Munster eventually got to grips with their visitors.

Once they did, Munster’s scrum gave them an excellent platform off of which to attack but knock-ons meant a number of early chances went a begging before Simon Zebo eventually made Munster’s territory and possession count in crossing for the game's opening try. The Corkman has now scored for Munster in every game against the French outfit. Any hopes of Racing folding early in the contest dissipated when Machenaud kicked a penalty on 40 minutes to leave just seven between the sides at the interval.

A Bleyendaal penalty restored Munster’s advantage upon the resumption and the sides traded tries through the hugely threatening Ronan O’Mahony and Henry Chavancy before the pivotal score of the game came from replacement Ian Keatley after some excellent footwork and handling from Andrew Conway in the build-up.

Racing meant business from the off. In the opening minutes, Munster interference at lineout time allowed Racing kick for the corner and find territory in the Munster 22. Despite the visitors knocking forward on a couple of occasions, the Racing scrum placed Munster under all sorts of pressure before they eventually cleared their lines.

If the Racing pack were up for this game, so too were the backs, taking the quick lineout option early on and having a real cut at Jacques Nienaber’s defence as they spread the ball at pace and recycled quickly. They eventually earned a penalty when Jean Kleyn came in from the side but Machenaud’s kick for three fell just short on 11 minutes.

With Munster starved of possession Racing came again and all Munster could so was soak up the hits as Racing’s physicality inched them ever closer to the Munster tryline with each collision. Respite eventually came when the Frenchmen went in off their feet, but Munster’s cooked feed to the lineout on half way was symptomatic of their nervy start.

Perhaps reeling from their poor start at set piece, the Munster pack soon rallied and pushed Racing off their own put-in in the visitor’s 22 and good work through the phases saw Rassie Erasmus’ men mount their first real attack before the knock on came on the ground. The chance was gone but Munster began to get a foothold in the game.

Sensing they had regained dominance in the scrum, they opted to pack down with subsequent penalties. Racking up ten phases off a scrum, Conor Murray dived over the ruck to touch down for what seemed like the game’s first try on 27 minutes only for the TMO to adjudge he knocked on in the process.

Munster came again through man of the match CJ Stander whose barnstorming run bulldozed through the Racing defence up to the 5 metre line where Benjamin Dambielle came in from the side to blatantly disrupt Murray and Munster’s quick ball. The Racing out half saw the sin bin for his efforts.

Munster opted for the scrum off of which they hoped to exploit the man advantage out wide, but again the knock on came. Racing’s breather was short-lived however as Munster again turned over possession when the Parisians attempted to exit.

Mauling initially off the kick to the corner, excellent work through the phases kept Racing busy at the breakdown and created numbers right where Murray found Zebo and the fullback somehow evaded the efforts of up to five Racing defenders in touching down yet again against the Frenchmen.

Bleyendaal’s extras made it 7-0 to Munster but O’Gara’s men would have the final say of the half.

Fast hands released Marc Andreu down the left flank and the winger was in save for Zebo’s excellent cover tackle. Racing continued to advance and when Munster failed to roll away, Machenaud made no mistake with his second kick at goal to set up a tense second half.

Upon the resumption a high tackle allowed Bleyendaal reinstate Munster’s ten point advantage and soon after Rory Scannell's kick for territory and a Peter O’Mahony lineout steal put Munster on the attack in the Racing 22. Shifting the ball wide, Zebo was unlucky to knock on from Bleyendaal’s long cut out pass. Had he secured it, Munster had a two-on-one at their mercy.

The Munster onslaught continued. Ronan O’Mahony was bundled into touch just before the line on 46 minutes but the winger would bag his seventh try of the season just minutes later. With play called back for an advantage, Munster kicked to the corner. Going to the maul at first, sharp passing from right to left then found O’Mahony who scampered over in the corner – just deserves for one of Munster’s most dangerous attackers all evening.

Rather than Munster building from here, it was Racing who stuck next, combining excellent running with quick recycling and neat handing as Chavancy made it a one score game with a quarter left to play. Munster did manage to make the final tackle but, buttressed by his fellow teammates, the winger’s momentum was enough to see him over the line. Machenaud made it two from three off the tee when slotting the conversion.

Not until the 70th minute could the sell-out crowd of 26,200 at Thomond Park breathe a sigh of relief. That came by the way of an Ian Keatley try in his first contribution to the game. Long range passes from Bleyendaal and Rory Scannell found Andrew Conway out wide who accelerated beautifully around the Racing defence before popping to Keatley on his inside and the Munster playmaker touched down for the game’s defining try.

Bleyendaal was off to the right with the conversion but from there Munster held out, a breakdown steal allowing Rory Scannell find touch on 80 minutes and kick Munster into a home quarter final in April.

Ticket details for Munster’s home quarter final will be announced in the coming 24 hours.

James Cronin emerged as the only injury concern and will require further assessment for a finger injury sustained the opening half of tonight’s game.

Having joined on a short term loan, Thomas Du Toit played his final game for the province while CJ Stander earned his fourth man of the match accolade of the season. 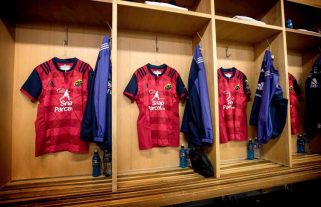 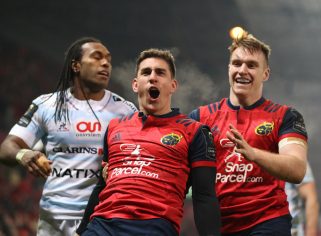