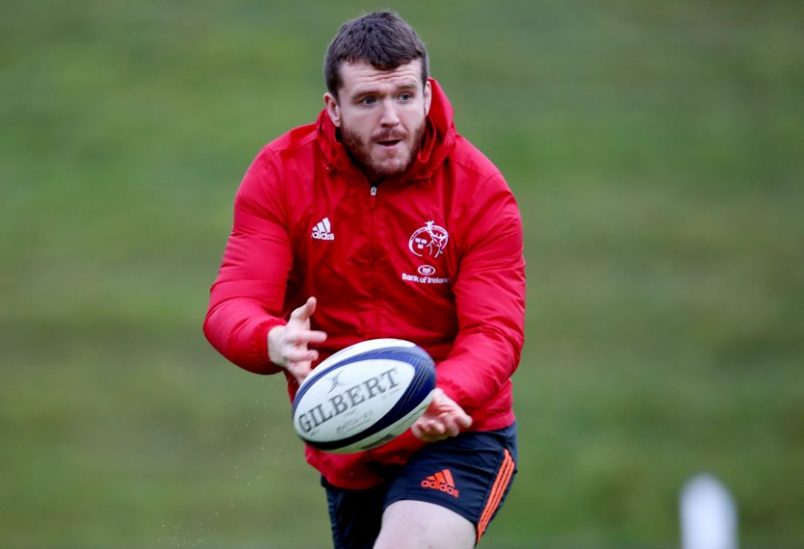 The Munster team to face Edinburgh at Murrayfield in their rearranged Guinness PRO14 clash tomorrow night has been named by Head Coach Johann van Graan.

There are six changes to the starting XV that defeated Glasgow at Irish Independent Park three weeks ago.

Billy Holland captains the side on his 150th PRO14 appearance as JJ Hanrahan, Rory Scannell, Darren Sweetnam, Mike Sherry, Jack O’Donoghue and Conor Oliver are all drafted into the side.

Sherry makes his first PRO14 start since April 2016 after recovering from a long-term back injury with Tommy O’Donnell named among the replacements and set to feature for the first time since sustaining a shoulder injury on New Year’s Day.

Simon Zebo starts at full-back with Sweetnam on the right wing and Alex Wootton on the left flank.

Rory Scannell partners Sammy Arnold in the centres with Hanrahan at out-half alongside scrum-half James Hart.

James Cronin, a try-scorer against Glasgow three weeks ago, keeps his place in the front row and is joined by hooker Sherry and tighthead prop Archer.

The second row of Jean Kleyn and Holland remains in situ with two changes to the back row as O’Donoghue and Oliver come in to partner Robin Copeland.

Academy scrum-half Jack Stafford, who is set to make his second senior appearance, is among the backline substitutes along with Bill Johnston and Dan Goggin.

“Winning is a habit, as Ireland have shown, and you need to build up a little momentum.”

Billy Holland looks ahead to tomorrow’s clash against Edinburgh with our team to be named later this morning. #EDIvMUN #SUAF pic.twitter.com/ZBKN91UzXK 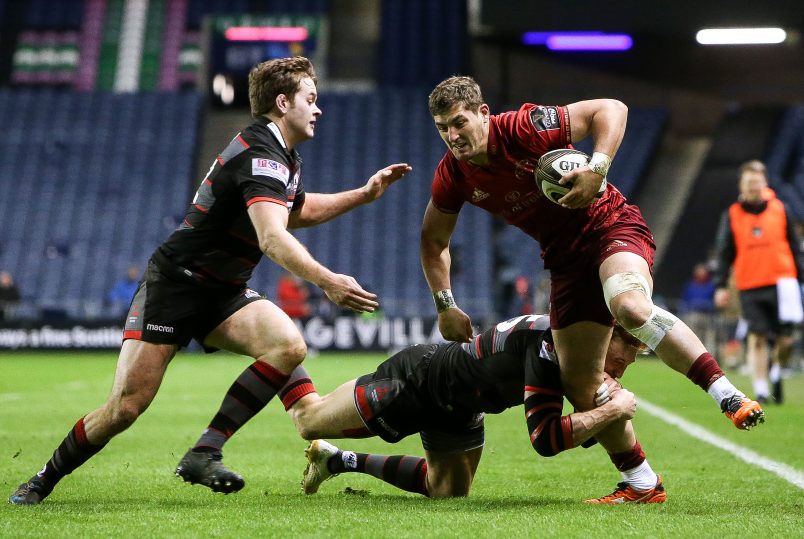 Duhan van der Merwe hit Munster for a double as Johann van Graan’s side tasted defeat at Murrayfield in the Guinness PRO14 on Friday night.

Two JJ Hanrahan penalties meant the reds left the Scottish capital with a losing bonus point, which has guaranteed Munster at least fourth place in Conference A and a spot in next season’s Champions Cup as a result.

Despite facing 14 men for early parts of the second-half, Munster could not defend the lead Hanrahan had given them in the 49th minute and van der Merwe’s double proved enough to deliver a deserved win for the home side.

In the opening few minutes it was Edinburgh that dominated possession and territory, with a brilliant kick from out-half Jaco van der Walt almost prising open the Munster defence early on, although Simon Zebo was on his toes to clear the immediate danger.

From the resultant lineout and maul, only a last gasp tackle from Jean Kleyn denied Edinburgh a try, but Munster needed a TMO intervention to deny Bill Mata a fifth minute score, when he was ruled to have been ahead of the ball when he picked from a ruck to touch down.

Munster were finally able to spend a bit of time in Edinburgh’s half following a penalty at scrum time after 16 minutes, and two minutes later they cashed in when Mata was penalised for sealing off and Hanhahan slotted a fine penalty kick from the left for a 3-0 lead.

Edinburgh had already lost scrum-half Sam Hidalgo Clyne at that point and Munster would also lose a player before the break when Alex Wootton limped off after 32 minutes. His replacement Dan Goggin ran out of room in attack shortly after his arrival, but moments later a lightening break from Dougie Fife sent van der Merwe in for the game’s opening try four minutes from the interval.

Van der Walt missed the conversion and Edinburgh had to be happy with a 5-3 half-time lead, and straight from the restart they could have stretched that lead, only for some excellent maul defence from Jack O’Donoghue and Robin Copeland to deny the home side.

A brilliant break from Copeland off the back of a scrum lifted the pressure for Munster and eventually led to Hanrahan kicking Munster back into the lead after more good work from Billy Holland at the breakdown.

A yellow card was shown to Edinburgh winger Jason Harries following his high tackle on Copeland after 50 minutes, but in that ten-minute period it was Edinburgh who shone and only a forward pass denied Fife the lead try after 56 minutes.

But despite some excellent defence under the posts from Holland and the Munster pack, a minute later the pressure told and van der Walt’s floated pass sent van der Merwe in for his second try.

Munster had plenty of time in Edinburgh’s half in the fourth quarter, but they were unable to convert their chances and the home side held on to claim the points.

Billy Holland made his 150th Guinness PRO14 appearance in the clash.

Mike Sherry made his first Munster start since April 2016.

Alex Wootton and Simon Zebo were both replaced due to injury and will be assessed by the medical team over the weekend. 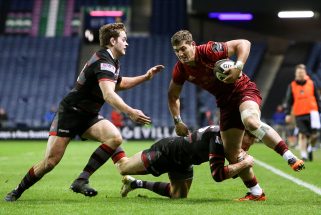 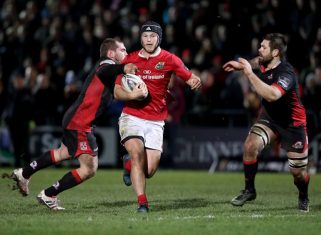