With one winning Rabo Direct PRO12 performance already under their belts, the men in red will seek to maintain their positive momentum against Benetton Treviso at Thomond Park this evening (8pm).

Munster’s victory in Murrayfield on Saturday last provided Rob Penney with the perfect start to his competitive tenure as provincial coach. But, make no mistake, they'll be wary of the challenge posed by their Italian visitors, who stunned defending champions Ospreys 12-6 in their season opener at the Stadio Comunale di Monigo.

As Six Nations form has dictated over the years, Italy tend to produce their better rugby in the opening rounds of the Championship. And to get off the mark in so spectacular a manner will have the former League champions on their toes from the kick-off tonight.

Nor will Munster need reminding that their last RaboDirect PRO12 clash with Italian opposition ended in defeat, a 21-17 reversal to the now defunct Aironi back in March.

Yet it must be stated that a Munster team replicating the form they produced in Edinburgh last Saturday ought to ensure that their successful start to the RaboDirect PRO12 campaign continues.

And the tactical shift alluded to by the new coaching team in the pre-season was already in encouraging evidence. After an opening quarter in which several passes failed to stick, something which stymied Munster in several close encounters last season, things quickly began to gel.

A solid scrum, spearheaded by the titanic BJ Botha, more than held its own against one of the best packs in European rugby.

Donncha O’Callaghan, aided and abetted by Billy Holland, roamed around the paddock with tremendous intent, retaining possession excellently and winning considerable ball on the deck.

Behind them, the back row of James Coughlan, Paddy Butler and new signing Sean Dougall could also reflect on a good night’s work, adapting well to the new rule changes while also competing well at the breakdown.

The half-back pairing of Duncan Williams and Ian Keatley have clearly benefited from their pre-season playing time, and they coped well after Edinburgh’s early offensive pressure.

And it’s to Penney’s credit that he trusted both men to steer Munster through a choppy period before Williams’ late replacement by the returning Peter Stringer.

But it was at midfield where Penney and back coach Simon Mannix will have drawn the greatest solace of all from a disciplined and, at times, flair-laced display.

James Downey and Casey Laulala appear to have developed a tremendous understanding in double-fast time, with both demonstrating their line-breaking and offloading élan.

Wingers Luke O’Dea and Doug Howlett put in fantastic shifts, with the new captain’s through kick instrumental in setting Keatley across the line for Munster’s opening try. O’Dea, who has bulked up considerably over the summer, took his match-clinching try superbly, after dashing on to a beautifully timed Downey offload.

Between them, Denis Hurley was masterful under the high ball and formed part of a back line approach that bodes well for the long season ahead.

While there’s always the prospect of an upfront arm-wrestle with Treviso, Munster’s offensive threat ought to provide them with an edge come tomorrow evening’s full-time whistle. So expect the men in red to maintain their early season momentum.

Dermot Keyes writes for The Munster Express and Emerald Rugby

Home Campaign Opens With A Win

First home game of the season in front of a crowd of just over 10,000 and a performance that was workmanlike rather than wonderful yet harvested four points a tad more easily that the final 19-6 might suggest.

Despite arriving with a much changed side, the Italians were competitive for the eighty plus minutes and at no stage ever looked like they'd just come over for the scenery.

As they had done the previous week in Scotland, Munster, working off a solid set piece, particularly dominant at scrum-time, showed a willingness to throw the ball about and although they only managed one try, they were just an unstuck pass away from opening up this Treviso defence. And credit too to the visitors for that defence because it needed to be determined on several occasions to deny the hosts.

It was badly breached as early as the 6th minute when Dave O'Callaghan, who had a fine game, took a ball at the tail of a 22 metre lineout, drove through the Treviso midfield and then sent a delightful inside pass to his skipper Doug Howlett to dot down under the posts.

Howlett was once again at the core of the action, nipping neatly up the right wing later in the half and twice in the second when he ripped the Treviso defence apart, the second time as first receiver when a despairing ankle tap stopped him delivering the scoring pass.

James Downey was another who caught the eye as did Sean Dougall while Ian Keatley's all round solidity made him a worthy RaboDirect Man of the Match.

Treviso opened with a penalty after three minutes from out-half Alberto Di Bernardo before Howlett's try converted by Keatley gave Munster the lead just three minutes after. From then on they basically controlled matters with Keatley kicking seventh, fourteenth and twenty first minute penalties, Treviso's efforts to establish a platform stymied immediately after those penalties by the restart takes of James Coughlan and Dave Foley.

It was to be a different scenario in the second half when the visitors, despite eight changes from their opening day win over Ospreys, managed to gain and hold onto more possession with Brendan Williams constantly asking questions of the Munster defence.

Keatley extended the lead in the 51st minutes, Casey Laulala was stopped short after a period of Munster pressure and the Italian cover defence stopped Luke O'Dea after a Keatley crossfield kick found Coughlan who set up the move.

The closing stages were a reprise of Murrayfield when, after Di Bernardo had reduced the deficit to thirteen, the Italians came looking for the score that would give them the losing bonus.

Twice from penalties they went to the corner for the lineout and drive and twice they came up short as Munster's defenders, down to 14 after Mick Sherry was binned, remained steadfast in their commitment. 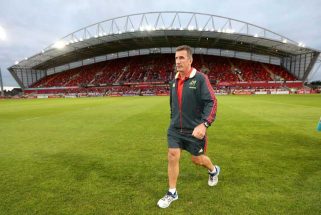 Home Campaign Opens With A Win