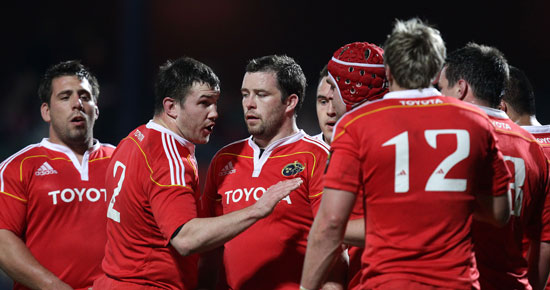 Its back to knock-out rugby for Munster when they take on a virtually full strength Cardiff Blues later today with a place in the Magners League semi final the prize for the side that holds its nerve best.

And it may be all about who blinks first although the home side hold all the aces in terms of form, player availability and history.

It’s nearly five years since Munster won in Cardiff and they arrive patently hurting from their ignominious exit from the Heineken Cup without injured skipper Paul O’Connell, his stand-in at lock Mick O’Driscoll and three of those who featured in that Heineken semi-final, Jerry Flannery, John Hayes and Keith Earls.

In addition to Flannery Munster are also without Denis Fogarty (leg injury) which means a place on the bench for Academy hooker Mike Sherry. Four of those who started last week are on the bench this time around, an indication of how hard the game was last week according to team manager Shaun Payne.

On the other hand the Blues have qualified for the Amlin Challenge final and, having lost eight of their first 12 matches this season, are now chasing a seventh succesive victory that could carry them through to the concluding stages of the Magners League at Munster’s expense.

So all in all a massive task for the reigning champions whose hooker Damien Varley spoke of the game in terms of that defeat to Biarritz. " A loss at the semi final stage of a competition as big as the Heineken Cup is very depressing but at the end of the day our season isn’t over. We’ve a huge game this weekend. We have to re-group. We have to get our heads right and hopefully take something out of the season.

We had a good win over them (Cardiff) earlier in the season but they’ve had a great run in their last few games It’ll be tough.They’re athome. It’s Xavier Rush’ last (home) game. They’ll want to give him a good send off. But we can’t really focus too much on them. We have to look at ourselves and what we have to produce. We have to step up to the plate after last weekend.

And no that’s never easy but you just have to.That what being a professional means. You have to turn around from hard losses like last week and get yourself up for big games like this one." 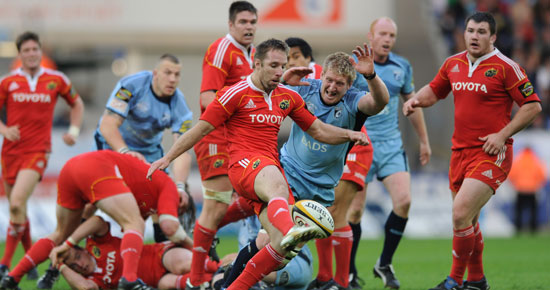 Munster showed their character in no uncertain terms on Sunday, just a very short week after the disappointment of San Sebastian, to claim a place in the Magners League semi-final despite a 13-12 defeat to Cardiff Blues at the City Stadium

The home side went into the game on foot of six successive wins, knowing that if they made it seven on the bounce and denied Munster a losing bonus they would go through to the semis to augment their success in reaching the Amlin Challenge Cup final.

And, unlike Munster, they were dealing from a full deck so fully deserved the favourite’s mantle.

They eventually managed the win thanks to a late 55 metre Leigh Halfpenny penalty but were unable to deny Munster advancing thanks to a whole-hearted team display orchestrated by out-half Man of the Match Ronan O’Gara who was aided and abetted by Peter Stringer, Jean de Villiers, Lifeimi Mafi, Billy Holland and Donncha O’Callaghan while rookie full back Scott Deasy showed commendable composure at full back.

That late penalty served up a very tense end game as the Blues came hunting for the converted try that would have seen them through. But it shouldn’t have come to that because Munster had what looked to be a certain try called back for a forward pass that clearly wasn’t.

It came mid way through the second half when O’Gara scythed through the Blues defence and popped an inside pass to de Villiers who set sail for the posts only to be halted by the shrill blast of Paul Allen’s whistle.

Ben Blair missed a couple of early penalties before finding the mark in the 13th minute for a three pointer almost immediately cancelled out by an O’Gara long ranger.

Munster were giving every bit as good as they were getting and found themselves in a perfect position with a five metre scrum under the posts. However, they coughed up ball in the subsequent pick n go and it ended with Jamie Roberts scoring at the far end despite the best efforts of Stringer and Nick Williams.

Blair added the extras and looked poised to take control but O’Gara continued in his rich vein from the kicking tee and three penalties later Munster went into the break, two points up.

The second half was a turgid affair, the best Blues chance coming when James Coughlan beat Daffyd Hewitt to the touchdown from a Martyn Williams kick-through. O’Gara was short with an effort from the half way line, spurned another opportunity at goals with a cross field kick that just missed it’s intended target but pulled all the right strings and put his body where most people wouldn’t dare.

In the end they were denied a victory by a well struck penalty but they can be more than contented with their day’swork, a fact acknowledged by coach Tony McGahan afterwards. "Our objective coming over here was to secure a place in the semi finals. We knew it wasn’t going to be easy. Knew we were going to have to work our socks off. We did that. Of course disappointed not to win but we got what we came for. I’d be very proud of the boys." 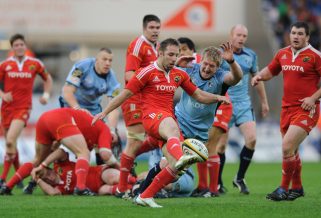 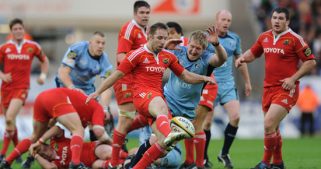