Munster Have It All To Do In Ravenhill 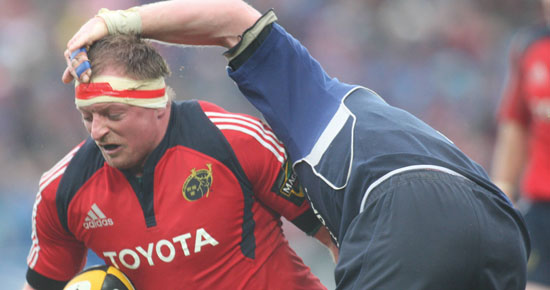 Munster coach Tony Mcgahan makes six changes, two of those positional, for the trip to Belfast tomorrow and the clash with Ulster at Ravenhill

Two of those changes are forced on McGahan by the injuries to Felix Jones in the game against Connacht and to Nick Williams who sustained a knee injury at training on Tuesday. Denis Hurley switches from the wing where he has impressed in the last three games to full back, a move that should not discommode him in the slighest while James Coughlan should prove a more than able replacement for Williams in the number 8 slot.

The other change up front sees Wian du Preez replace the injured Julien Brugnaut (groin) while McGahan’s bench has a decidedly youthful look to it drawn as it is from either Academy or Development players, the only exception being Tom Gleeson who sits out the start behind Lifeimi Mafi.

With three of the regular Os not available by international dictat, Paul Warwick slips into the number 10 jersey while the fourth O, Mick O’Driscoll will captain the side.

Munster, although buoyed by their bonus point win over Connacht last time out will need no reminding of the type of challenge that they face on Saturday.

"It’s easily one of the toughest games of any season." says skipper Mick O’Driscoll. "They have a great home record and besides that, last weekend without key players, they gave a full strength Leinster one helluva game. So yes, it’s going to be very difficult to get anything out of this one. Always is in Ravenhill, but these are the sort of games you want to play in and I’d be happy with our form going into it." 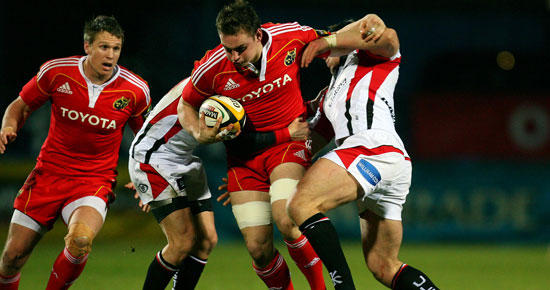 Ultimately, it was a brace of tries within the space of three minutes from wing Simon Danielli as early as the close of the opening quarter, that decided this Magners League clash at Ravenhill in Ulster’s favour

Trailing 15-0 and with the partisan home crowd baying their willingness to stand up for the Ulstermen, Munster looked in dire straits. To their great credit they refused to panic, ended the half just five points in arrears and dominated the second half to such a degree that had they snatched victory, a full strength Ulster side could have had no complaints. That they didn’t owes much to a resolute Ulster defence a few 50/50 decisions and perhaps a small lack of patience at times as Munster drove forward.

When James Coughlan was pinged in the 9th minute for coming in from the side, the bearded Ian Humphreys kicked Ulster in front.

That score was to signal Ulster best period of the game and although it lasted all of eleven minutes or so they emerged with a further 12 points and what looked a commanding lead.

The first score came when Paddy Wallace blocked a Paul Warwick chip and the ball deflected kindly to give the Scottish winger a free run to the line.

Humphreys converted and from the restart Danielli was away again, Trimble this time making the initial incursion and working his hands free to release Danielli once again.

Warwick was short with a long-range 25th minute penalty but shortly after Couglan’s electrifying burst had Munster peppering the Munster line but from a five metre line-out after a good O’Driscoll take, Munster conceded the penalty allowing Ulster to clear their lines.

The pressure finally paid off when Humphreys threw a sloppy pass back that Jean de Villiers’ snaffled to score at the posts. Warwick added the conversion and just before the break added a penalty to put Munster right back into it.

That was however to be the final score of the game. All the threat came from Munster in the second half. The nearest they came when Warwick’s penalty came back off an upright and from the resultant scrum after an Ulster knock on, Coughlan made good ground off the back but his pass was fumbled. 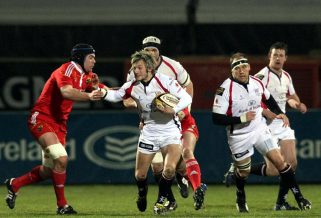 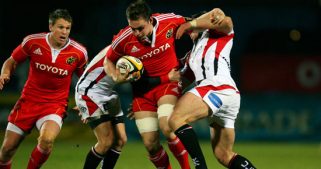