Munster Have It All To Do. 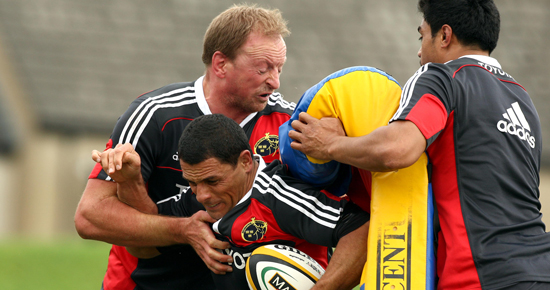 Munster put their unbeaten record on the line on Scottish soil for the second time in three weeks as they face up to a Glasgow Warriors side certain to be looking to maintain their good home record while at the same time getting their show back on the road.

Glasgow opened with that good win against Leinster but then lost in Rodney Parade and then as thhey see it, tripped up badly against Connacht last time out. But their home record against Munster in recent times is something that will send them into this game in confident mode with Ali Kellock especially glad it seems about his side's opponents this evening.

Speaking to Kevin Ferrie in the Hereald today he says, “It’s a good thing it’s Munster. We do well against them at Firhill and I really hope we step up our performance this week because we’ll have to because they’re a better, more consistent team than Connacht, so for us to get the win we’ll have to be far better than we were.”

Munster who travelled over yesterday were forced to made some adjustments to their squad when Mike Sherry and John Hayes pulled out to be replaced by Sean Henry and Darragh Hurley on the bench.

They welcome back David Wallace and Lifeimi Mafi for their first Magners games of the season, although Mafi did have a run in the A game against Ulster when he scored a try.

Strong Second Half Seals It. 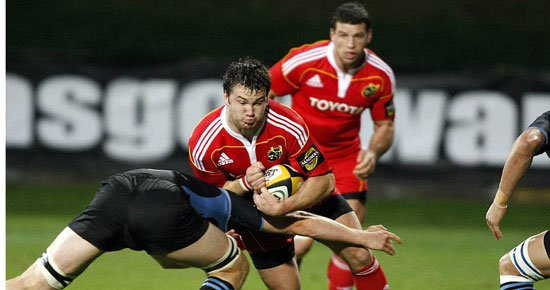 Munster buried their Firhill bogey with a bonus point 43-29 win over Glasgow Warriors to maintain their winning start to this season’s Magners League.

They trailed 26-17 at half time having conceded a late try to Colin Gregor but then went on to dominate the second half and tries from Niall Ronan and Johne Murphy – his second of the night – and a flawless kicking return from Ronan O'Gara earned them a victory they richly deserved.

They were forced to absorb a lot of the early pressure as Glasgow set the pace and the home side's young out-half Duncan Weir was wide with two penalty attempts before kicking his side in front with a penalty in the 7th minute. He was again on the mark in the 16th minute converting DTH van der Merwe try from his own well judged cross-field kick, won initially by Bernardo Stortoni.
Munster's response was to deploy their pack in a rolling maul that resulted in a try for skipper Denis Leamy and O'Gara added the conversion from the touchline.

The penalty count continued in Glasgow's favour and Weir kicked two as opposed to one from his opposite number but Munster snatched the lead when Murphy finished well and O'Gara again landed the difficult conversion.

Just before the break however with Munster reduced to 14 after Donncha O'Callaghan had been yellow-carded, Glasgow struck again through Gregor and Weir duly added the extras to send his side in at the break with a nine point lead.

As had been the case the previous week against the Ospreys, Munster started the second half full of purpose and scored two converted tries in the space of five minutes to effectively seal the outcome.

They were gifted field position for the first when Gregor knocked on under his own posts. Leamy made the initial incursion off the back of a five metre scrum and found Ronan in support to score. Minutes later O'Gara put a delightful kick behind the defence and Murphy showed great pace and awareness to score the try with his out-half again landing the touchline conversion.

Having being on the wrong end of the penalty count in the opening half, Munster found Mr Damasco's decisions now going their way and O'Gara reaped a rich harvest. He kicked three from three in the space of five minutes and added a further one at the death. 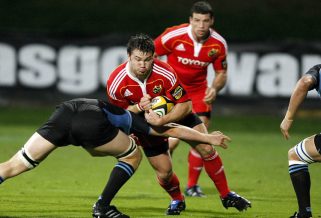 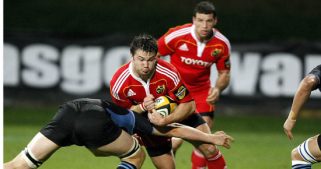 Strong Second Half Seals It.