Munster Back In Action With Seven Changes

There are seven changes to the starting XV that lined out against Cardiff Blues at the start of the month, Foley also makes two positional switches with one notable move seeing JJ Hanrahan start at full-back.

In the replacements, newcomer Pat Howard is in line to make his Munster debut while Dave O'Callaghan is named in his first match-day 23 since February after successfully rehabbing a knee injury.

With two changes to the front five, hooker Eusebio Guinazu makes his first start for the province while Stephen Archer takes the place of BJ Botha at tight-head.

Fresh from making his Ireland debut against Georgia on Sunday, returning international Robin Copeland is named at 8, while Paddy Butler moves to blindside with Sean Dougall starting at openside.

After making his third appearance for Ireland last weekend, Ian Keatley is also released back to the province and he starts at 10 with Cathal Sheridan joining him in the half-backs.

Denis Hurley renews his centre partnership with Andrew Smith; Ronan O'Mahony and Andrew Conway are named out wide, while Hanrahan wears the number 15 jersey for the first time.

On the injury front, Barry O'Mahony, who was stretchered off from training on Monday afternoon, underwent surgery on his right ankle in Dublin yesterday and he has been ruled out for the immediate future. 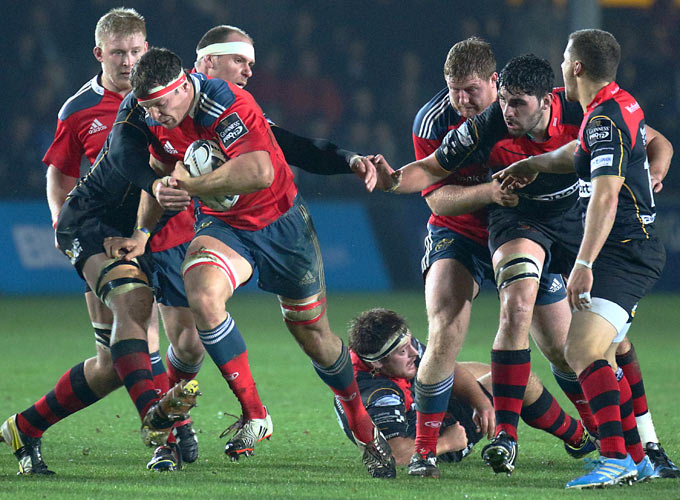 Munster moved up to third place in the Guinness PRO12 table tonight after recording a 38-12 bonus-point victory against Newport Gwent Dragons in Rodney Parade.

In the first half Dragons racked up the points after sustained pressure and lengthy periods in Munster territory.

Munster’s score came off a well worked set-piece, when a controlled lineout and maul option ended with Robin Copeland touching down for the first try of the game.

In the second half improved ball retention and game-control allowed Munster to create the scoring opportunities with Duncan Casey, Andrew Smith, Paddy Butler and Ronan O’Mahony all crossing the whitewash.

Casey was a late addition to the starting XV after Eusebio Guinazu was withdrawn due to a tight hamstring. Niall Scannell was included in the replacements.

Man-of-the-match Ian Keatley opened the second half with a well taken penalty from 41 metres, regaining the lead for Munster.

The province then used their superior scrum and improved lineout to secure possession and when Cathal Sheridan blocked down a clearing Dragons’ kick Duncan Casey scored off the next 5 metre lineout maul.

Andrew Smith ran in unopposed for the third try after Keatley released fullback JJ Hanrahan who stepped outside his man to pop the ball back inside to Smith and open space.

Munster continued to apply the pressure for the final minutes and Ronan O'Mahony did well when he claimed JJ Hanrahan’s grubber kick to dive over in the corner for the fifth try.

Keatley made it six from six with the touchline conversion. 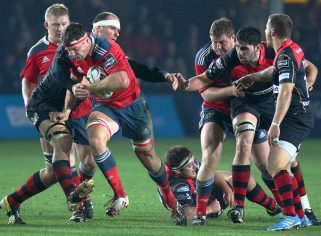