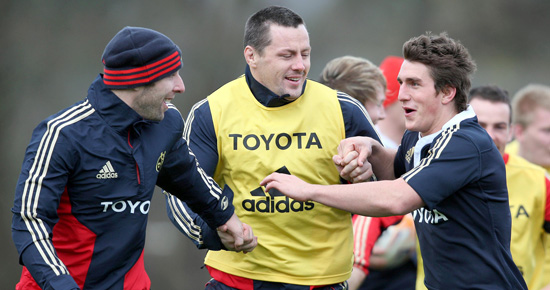 No matter what way you dress it up, Munster face a massive challenge to get back to winning ways in the RaboDirect PRO12 with Edinburgh next up in Thomond Park Stadium tonight (8.30).

Never mind the ungodly hour for the kick-off, Michael Bradley brings over a squad that he used to such good effect in the Heineken Cup that sees them with two from two including a win over London Irish in Reading.

On the other hand Tony McGahan has to do without 13 players who are on the injured list plus his internationals who are confined to the sidelines under national squad player management policy.

Nor are the visitors shy about declaring their confidence about this one, " Munster obviously have an impressive record as reigning league champions," says their centre Tom Brown, " but our run, which started with winning at Treviso just after they had put 50 points on Dragons, gives us confidence.

"It's still hard to get my head around exactly how we came back to beat Metro but that has given us a confidence to know we can win anywhere, including Munster."

It's a certainly a case of youth and experience from Munster's point of view, the core of tonight's squad were involved in the British & Irish Cup win over Neath last weekend but there's a hard core of experience there in the likes of Denis Hurley, Tomas O'Leary, Marcus Horan, Denis Fogarty, Donncha O'Callaghan, Billy Holland and skipper Mick O'Driscoll who will need to lead by example if Munster are to get back to winning ways and haul themselves back into the top four. 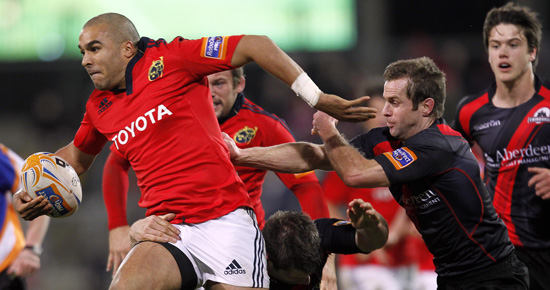 There really was a lot to like about Munster’s RaboDirect PRO12 34-17 win over Edinburgh in front of nearly 12,000 spectators at Thomond Park Stadium.

First was the fact that two of the four tries came from their 21 year old 'wide boys'. Simon Zebo and Luke O'Dea – making an impressive debut – a third courtesy of a penalty try to highlight the progress – referenced afterward by Anthony Foley – that Paul McCarthy is making in that area and an overall performance in the absence of their stellar names that augers well for the weeks and months ahead.

Naturally enough there were stand-out performers and while O'Dea looked more than comfortable at this level and Danny Barnes (just turned 22) showed a welcome return to form, on an evening when the experienced lads were asked to lead, Marcus Horan, Denis Fogarty, Donncha O'Callaghan and Denis Hurley answered the call as did the indefatigable Mick O'Driscoll and Tomas O'Leary.

Hurley was awarded the Man of the Match and deservedly so but it had to be a close run thing with O'Callaghan, who, no doubt smarting from being dropped the past two weeks, put in a tremendous shift until replaced by Ian Nagle in the 76th minute.

From the moment Hurley, safe as houses under the dropping ball, created the first try, he never put a foot wrong. That opening score started when Ian Keatley scampered across field, fed Hurley who straightened, split the Edinburgh defence and drew the last tackle before off-loading to Barnes for, with the after burners he possesses, what was a simple run-in.

Keatley landed the difficult conversion to atone for a simpler first minute miss, then turned provider again nine minutes later although this time for the visitors when his attempted grubber went straight to Jack Gilding who set off on a break that ended in a try for Phil Godman.

The out-half made an awful effort at a conversion and two further Keatley penalties sent the sides in at the break with Munster leading 13-5.

Shortly after the restart, Edinburgh were right back in it after Tom Brown stretched to score wide on the left under the West Stand at the Ballynanty end. And with the elements in their favour, Michael Bradley's side looked set to drive on.

However, Munster rolled up their sleeves and after a series of five metre scrums, 13 man Edinburgh eventually left referee Neil Paterson no option but to march under the uprights and award a try.

Keatley tapped over the conversion and was on the mark again seven minutes later to add the extras to Simon Zebo's try, the wing benefiting from a Will Chambers incursion and off-load.

The outcome was way beyond doubt when Greig Laidlaw scurried over for try he then converted but Munster secured the bonus with O'Dea's try right on the final whistle.

Afterwards Anthony Foley wore a contented smile declaring. "Yes, we'd be very happy with that performance. 13 changes from the last League game, to produce a display like that against a quality side, you'd have to be happy."

"In any level of this game, you have to have a dominant scrum if you hope to achieve anything, " he continued. "That's the way it is. Always has been. And tonight our scrum went very well and reflects the hard work that's been put in. By the players themselves, by Paul Mac (McCarthy). And the other thing is the overall effort, great attitude, great workrate.

"We worked hard this week, training was good and I think we saw the results of that tonight. Where it counts. Out there on the pitch." 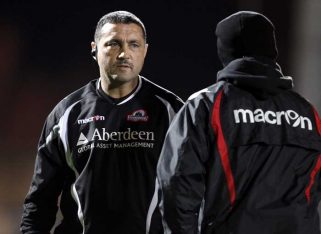 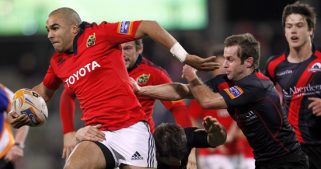