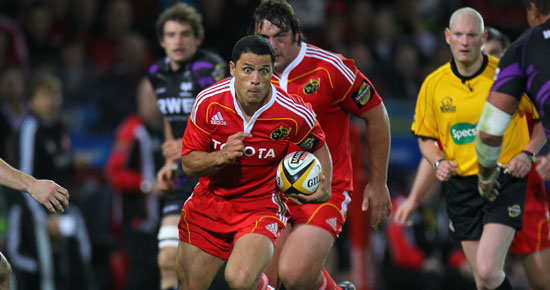 It’s back to basics and to Musgrave Park for Munster following their historic exploits last Tuesday in Limerick, when they resume their Magners League campaign with the game against Scarlets on Sunday (5.35).

It's a Munster side that shows two changes from one that covered itself in glory against the Australians with Barry Murphy making a welcome return to the starting XV in place of Keith Earls and Alan Quinlan set to return to the blindside if he's recovered from the hamstring injury that has been troubling him recently.

They face a Scarlets side who are just four points behind them in the table and missing just three of their international, Stephen Jones, Matthew Rees and George North. Besides that the Welsh side are enjoying a rich vein of form and last weekend accounted for London Irish comfortably in the LV Cup.

Scarlets coach Nigel Davies does not anticipate a stronger challenge on Sunday. "We know it's going to be a difficult place to go. They had a massive win on Tuesday against the Australians but this won't be a bigger one than last week when we came through against a strong London Irish side."

The five day turnaround is certainly something that could be a factor because that clash with the Wallabies was a hugely physical affair and in the conditions energy sapping but it would also have provided a massive boost to the morale of the squad.

Murphy returns to the Munster starting line-up for the first time in over a year. He's had a few outings with his club UL Bohs, got a few minutes off the bench on Tuesday and has looked particularly sharp in training this week.

Other than that the backline remains the same as Tuesdays while the inclusion of Quinlan is the only change up front in a side that will be captained by Doug Howlett.

Backing up the heroics of the Aussie game was the central theme of Munster utterings this week and on Sunday evening this squad, with Doug Howlett leading by example and superbly marshalled by Tuesday’s skipper James Coughlan, showed it was no idle chatter as they resisted a strong Scarlets challenge 27-26 to go seven points clear at the top of the Magners League table.

In a quite enthralling contest, they scored three tries, one in the opening half, each a gem, almost scored the bonus and yet could have lost it at the death when Scarlets launched a break-out length of the field attack that ended metres short of the Munster line.

And while it would have been a heart breaker if they had succeeded, the neutrals, if there were any in the ground might have applauded because these Scarlets, shy just three of their international contingent, came to play.

And they did. With verve and gusto and no small amount of skill putting width on the ball at every opportunity that demanded the utmost concentration from the Munster defence. In that aspect of play, particularly in the opening half, Doug Howlett played a captain's role.

In one short phase as Scarlets went left then right, he put in four tackles in the space of as many, maybe less minutes. Man of the Match Barry Murphy, playing his first full game for Munster since mid September 2009, wasn't far behind in the tackle count nor was Coughlan who was also the main instigator of Paul Warwick's 36th minute try.

Scarlets enjoyed the better of the early exchanges and were desperately unlucky to be reduced to 14 when in the 13th minute their scrum-half Martin Roberts was yellow carded for impeding Denis Hurley as he chased a high ball. Roberts did nothing illegal, just checked Hurley accidentally. Justice of a sort was done when Warwick's penalty from the Scarlets 10 metre line shaved the wrong side of the upright and minutes later Rhys Priestland, who had missed two earlier efforts, opened the scoring with a penalty.

Warwick landed two in the space of seven minutes before Priestland's 33rd minute effort leveled to leave the game delicately balanced. Then came the Coughlan inspired first try. The Dolphin man burst clear on half way, his surge taking him deep into Scarlet territory and when he was hauled down Mick Sherry was on hand to continue the move to short of the line. The support arrived in the shape of Peter O'Mahony, Niall Ronan and Billy Holland – he had another massive game – and the ball flashed right for Coughlan to surge again before delivering the scoring pass for Warwick to dot down under the posts.

It seemed Munster would take that seven point lead into the break but Scarlets had other ideas and an injury time try from captain Joanathan Edwards superbly converted by Priestland tied the score at the break.

Shortly after the restart Munster were down to 14 when O'Mahony saw yellow but while he was off cooling his heels Munster scored 14 points. The first try came when Howlett's sublime pass sent Tuitupou galloping through and almost immediately after the restart, Murphy, looking as sharp as a blade, took an excellent line to scorch over from 40 metres.

That score brought the biggest cheer of the night and Warwick's conversion put Munster into a 27-16 lead.

But it had never been the Scarlets intention to roll over and be tickled and a second Edwards try at the end of the third quarter, converted by Priestland, ensured that Munster had to keep their now weary shoulders firmly to the wheel. They laid siege to the Scarlets line, were denied and when the visitors lifted the siege, Priestland kicked a penalty to leave just one point separating the sides.

Munster came back for another bite of the cherry, were stopped short several times and when Scarlets lifted the siege this time it was with a move the length of the field halted by a last gasp tackle from Denis Hurley and then Scott Deasy and Tuitupou did their bit. Now it was Munster's turn to defend desperately and that they did with admirable control to snatch a deserved victory. 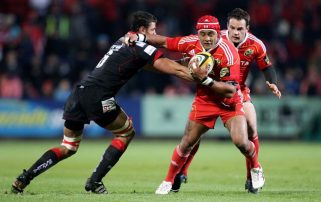