With just the slimmest chance of claiming a semi-final spot, Ulster leave their big guns at home for the final round league game in the RaboDirect PRO12 tonight at Thomond Park Stadium.

For Ulster to be involved next weekend, they'd need Connacht to win in Firhill (Glasgow Warriors) and deny their hosts a losing bonus. Then they'd need to beat Munster tonight with a bonus.

Then they'd have to hope that Scarlets dont take five points from their home game with Cardiff Blues.

And then they'd edge out Glasgow Warriors on matches won, by one.

And then they'd be headed for Dublin next Saturday to play Leinster. A week before they play them in Twickenham !

Two players who'll start off the bench tonight, Tomas O'Leary and Ian Humphreys, will be teammates next season, after the news yesterday that Humphreys is joining London Irish but it's Paddy Jackson who'll command the attention at 10 for Ulster as he auditions for a place in the starting XV for the Heineken Cup final.

On the Munster side Ivan Dineen gets his first start of the season and just the second of his fledgling career, at outside centre in place of Keith Earls who is named on the bench.

There's just one change in the pack with Wian du Preez in instead of Dave Kilcoyne while Mick O'Driscoll continues to keep Donncha O'Callaghan out of the starting XV, O'Driscoll also playing for the final time at Thomond Park. 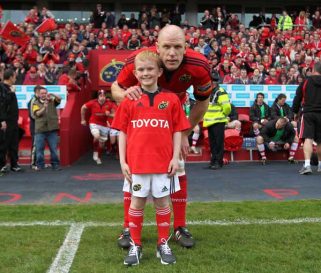