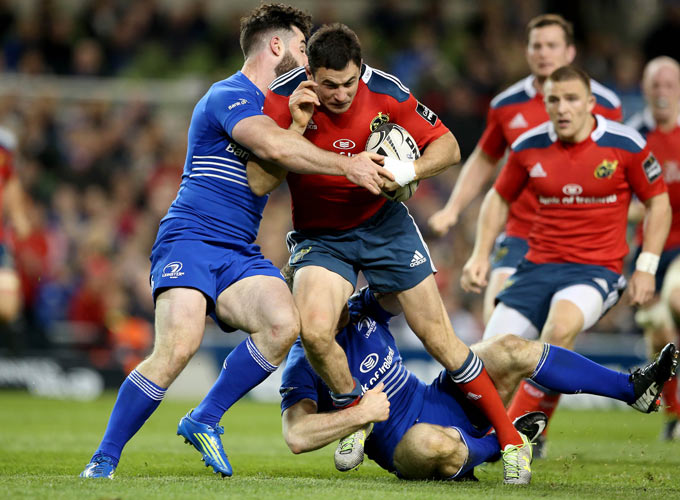 Head Coach Anthony Foley has named his 23 for the St. Stephen’s Day clash against Leinster in Thomond Park and makes eight changes to the starting XV that lined out against Glasgow Warriors last Saturday.

The returning trio of Duncan Casey, CJ Stander and Tommy O’Donnell all start this week with Casey joining John Ryan and Stephen Archer in the front row.

Munster's most capped player Donncha O’Callaghan is promoted from the bench this week and starts next to Billy Holland while in the backrow Robin Copeland retains his place at 8 with Stander and O’Donnell coming in at 6 and 7.

Duncan Williams and Ian Keatley renew their half-back pairing as Hurley, Howard and Conway stay as they were with Ronan O’Mahony coming in on the wing, and Felix Jones at fullback as he captains the side for the third time.

In the replacements Garryowen scrum-half Neil Cronin is included in his second PRO12 match-day squad and is in line to make his debut if sprung from the bench.

Those not available for selection this week through the national player management programme included Paul O’Connell, Peter O’Mahony, Conor Murray and Simon Zebo.

Please note this game is sold-out, with no tickets available to purchase on match-day. 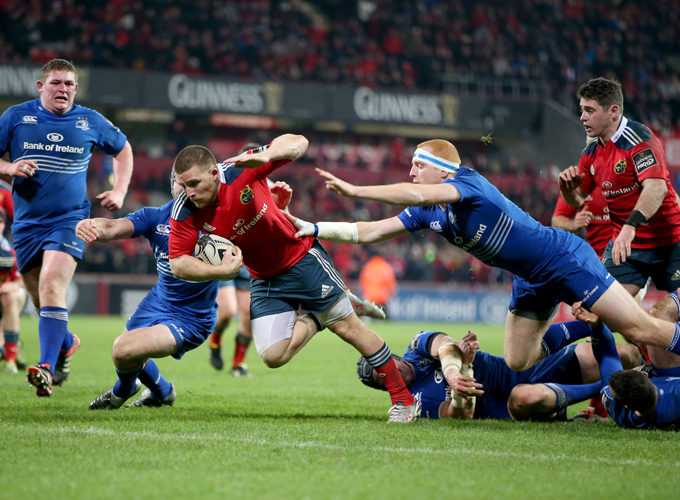 Tries from CJ Stander, Andrew Conway and Dave O’Callaghan helped Munster to a controlled and comprehensive victory over Leinster at Thomond Park this evening in round 11 of the Guinness PRO12.

Making good use of the high ball in windy conditions, particularly through the boots of Ian Keatley and Duncan Williams, the hosts placed Leinster under plenty pressure from the off and when Dave Kearney was forced to run the ball into touch on his own 22, the subsequent line out maul forced Leinster into coughing up Keatley’s first kick for three points.

With Keatley getting Munster off the mark on 2 minutes, the next opportunity was to come Leinster’s way when the hosts were penalised for not rolling away and Ian Madigan was on hand to level matters on 6 minutes.

Good tactical kicking from Keatley continued to keep Leinster pinned in their own half and after a sustained period of pressure that lasted almost 15 phases, Munster were awarded a free and the put-in to the scrum.
From here Munster would not be stopped, picking and driving towards the line and it was a shirtless CJ Stander (Man of the Match) that dotted down for the opening try of the game on 16 minutes. Keatley was just right and wide with the conversion.

Try as Leinster might in the opening 40, they lacked the penetration of their interprovincial rivals, and again testament to the Munster pressure, the men in blue failed to secure a lot of their own ball at set piece.

In fact, thanks to great broken field running from Felix Jones and Keatley, Munster were unlucky not to be in for another try before the break – eventually being penalised for not releasing deep in the Leinster 22.

Leinster’s best chance of an opening half try came on 25 minutes when they managed to string some phases together and inch towards the Munster line. However the host’s defence held firm and it was the captain Jones who led by example in securing the turnover on the line, neutralising the Leinster threat.

The remainder of the half would see the sides trade penalties, two for Leinster – one of which Madigan converted after Keatley and Butler infringed for offside and not releasing respectively – and one penalty for Munster after Leinster failed to roll away, allowing Keatley to extend the advantage to 5 points before the break.

Munster began the second half much like the first with sustained pressure and penetrating phases close to the Leinster line. When the Munstermen chose to go wide, the visitors hand no answer and Andrew Conway did well after taking the ball at pace to pump the legs and touch down despite the efforts of three Leinster defenders.

With the conversion added by Keatley, Munster lead 18-6 on 44 minutes.

In keeping with the theme of the game, Leinster’s reply was an 18 phase attack within inches of the Munster line. Still however, they were unable to breach the host’s defensive line, eventually knocking on and handing the advantage back to Munster.

When Darragh Fanning saw ten in the bin for offside at the breakdown, Keatley added to Leinster’s woes by extending Munster’s tally to 21 on 54 minutes.

With Munster winning the battle on the ground and in the scrum, their territorial dominance was to be rewarded just minutes later when the aforementioned penetrating phases from Munster punched holes in the Leinster defensive line, holes which the hosts duly exploited through Dave O’Callaghan who touched down close to the posts for Munster’s third on 62 minutes which Keatley also converted.

Leinster would spend the next ten minutes camped inside the Munster 22. Munster’s defence held up manfully as Leinster threw everything they had at them both in close and out wide. However tiring bodies would eventually fall foul of the Leinster onslaught and Shane Jennings crossed for Leinster’s opening try on 70 minutes. Madigan added the extras to give the visitors the chance of a losing bonus point at the very least with less than ten to go.

Munster for their part were chasing the winning bonus point and came close after another mammoth 17 phase effort, only to knock on close to the line.

With play returning to the opposite end of the field one final time, Leinster again came within inches of the Munster line. This time though, Munster’s defensive effort would take the spoils. Despite the power of the visiting pack and the elusiveness of their running backs, Anthony Foley’s charges defended as if it was a one point lead, eventually winning the turnover and neutralising the final Leinster attack.

From there Munster held out to claim a comprehensive 28-13 victory.

Speaking after the game Head Coach Anthony Foley commented on Robin Copeland who left the field injured in the opening half saying, “Robin came off with a shoulder injury and is in a sling but will get a scan to see more.” 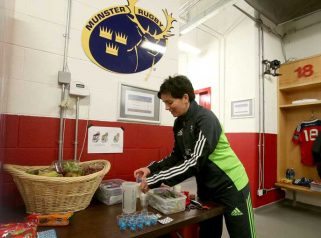 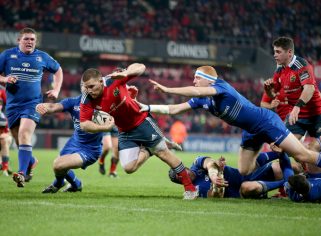