Anthony Foley has named his 23 man squad to face Benetton Treviso and see’s two of Ireland’s summer tourists to Argentina return to the fold, with Felix Jones to captain the province for the first time.

In total the starting line-up sees a change of eight personnel from the team that lost the league opener at home to Edinburgh Rugby last Friday night.

It was expected that Paul O'Connell would make his return to action tomorrow night, however he was a late withdrawal due to personal reasons and did not travel with the squad.

James Cronin returns to the front row for the first time after making his Irish senior debut on the Summer Tour to Argentina and is joined in the front row by hooker Duncan Casey and tighthead Stephen Archer. Both Casey and Archer are promoted to a starting position having featured as replacements last weekend.

In the second row, Dave Foley is another promoted from the bench to a starting position and is partnered by Billy Holland who makes his second start in as many weeks.

CJ Stander retains his place at 6, with Tommy O’Donnell making his first start of the season at 7. Having made his first Munster appearance against London Irish in the pre-season SEAT Challenge and after missing out on selection last week due to bruised ribs, Robin Copeland is set to make his competitive debut for Munster at 8.

As you were at half-back with Duncan Williams and Ian Keatley lining out again at 9 and 10 respectively.
In the centre Ivan Dineen makes his first PRO12 start of the season at inside centre with Andrew Smith moving to outside channel for this weekend’s clash.

While in the back three, Simon Zebo and Andrew Conway retain their places on the left and right wings respectively, with returning international full-back Felix Jones captaining the side for the first time and making his first appearance of the new season.

Front row back-up is provided by John Ryan, Kevin O’Byrne and BJ Botha, with Donncha O’Callaghan and Sean Dougall completing the complement of forwards in the matchday squad.

Cathal Sheridan and Johnny Holland provide cover at half-back, while Ronan O’Mahony is also on hand for backline cover. 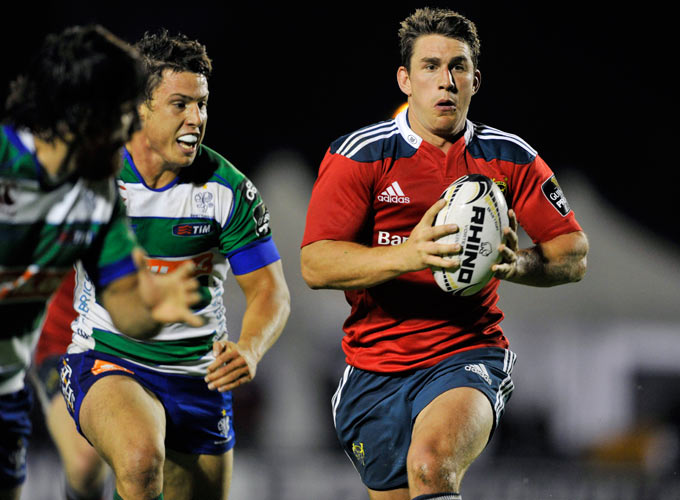 Munster overcame Italian side Benetton Treviso 21-10 at Stadio Monigo tonight in securing their first PRO12 victory of the season.

CJ Stander and Simon Zebo scored Munster's tries while Ian Keatley kicked 11 points to give Munster the result and the league points required from the round 2 encounter.

Ian Keatley's boot was called into action in the opening minute and it was a positive start for the out-half who made four out of his five kicks at goal.

But it was the hosts who were first to cross the line with a well taken score after 17 minutes. The lineout option went long and with the ball passed back inside to winger Ludovico Nitoglia he punched a hole in the Munster defence. The ball was moved through the hands and with the numbers advantage fullback Simone Rugusi completed the move. Joe Carlisle added the extras & the home-side went ahead 7-3.

Minutes later Treviso were pinged for a collapsed scrum in front of the posts and Keatley took full advantage to reduce the margin before CJ Stander put Munster ahead as he crashed over for the province's first try. It was Duncan Williams who found Keatley on his shoulder to release him into space and bring play deep inside the 22. Munster began to build the phases and with the pack powering over the line it was Stander who claimed the close-range try. The conversion was added by Keatley and Munster led 13-7 at the break.

Foley’s charges missed out on two scoring opportunities in the final stages of the first half with Andrew Conway prevented from grounding the ball as he darted through the Treviso defence and dived for the posts. And the winger was involved again when exchanging passes with Zebo the space opened for a two-v-one attack but Ragusi’s intercept denied any outcome.

In the opening 10 minutes of the second half Carlisle missed two penalty opportunities for his side to reduce the gap and Treviso's woes continued when they made hard work of a clearance from their line after 48 minutes.

Munster were quick to react and Simon Zebo scored from the resulting counter-attack. The winger found space out wide and burst through for Munster's second try, Keatley missing his only kick of the night with the tough touchline conversion.

The Italian job was completed with a final Keatley penalty on the 70th minute after the pack won the scrum advantage and the out-half blasted the kick from near halfway. Munster held on to their 11 points cushion for the closing stages and recorded their first victory in three years at Stadio Monigo. 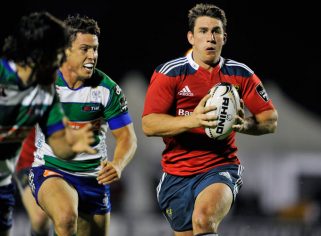