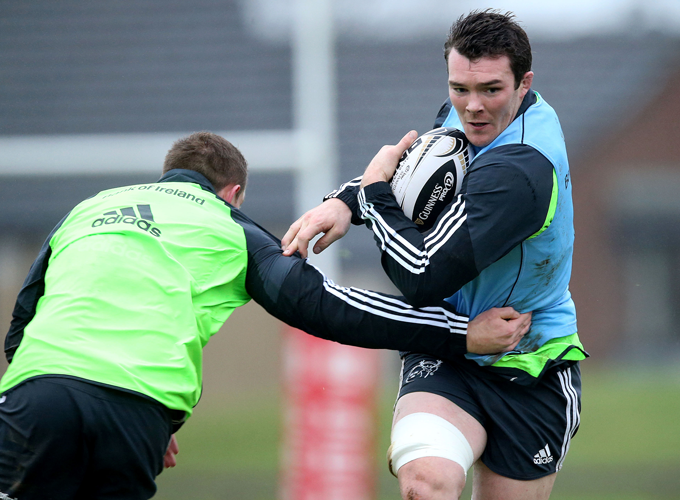 Head Coach Anthony Foley has named a strong side to face Edinburgh at Murrayfield tomorrow evening (KO: 7:30pm), including the final trio of returning internationals – Paul O’Connell, Peter O’Mahony and Conor Murray – in the starting line-up.

In total, Foley makes six changes to the side that defeated Connacht at Thomond Park just under a fortnight ago.

An all new front row sees Dave Kilcoyne and BJ Botha pack down on either side of Duncan Casey who makes his first start since rehabbing an ankle injury sustained during training in February.

Paul O’Connell returns to partner the in-form Billy Holland in the second row, while the inclusion of captain Peter O’Mahony at 6 is the only change to the back row with Tommy O’Donnell and CJ Stander continuing at 7 and 8 respectively. O’Donnell draws ever closer to the 100 cap milestone and will win his 99th cap for the province this weekend.

The final change comes in the half backs with scrum half Conor Murray resuming his partnership with Ian Keatley.

As you were in the midfield and back three with Denis Hurley, Andrew Smith, Simon Zebo, Keith Earls and Felix Jones all retaining their starting positions.

James Cronin is included amongst the replacements for the first time since picking up a knee injury on his 6 Nations debut against Italy in February, while Donnacha Ryan also takes his place on the bench having completed his return to play protocols following a concussion sustained while playing for Munster ‘A’ against the Ulster Ravens in March.

There’s good news regarding Cathal Sheridan. After almost five months on the sideline with a forearm injury, the scrum half has completed his return-to-play and may be available for his club side this weekend.

Meanwhile Munster ‘A’ will travel to Banbridge RFC to face the Ulster Ravens this coming Thursday, April 16th at 5pm. The sides previously met in March with Munster ‘A’ winning out 30-24 at Nenagh Ormond RFC. 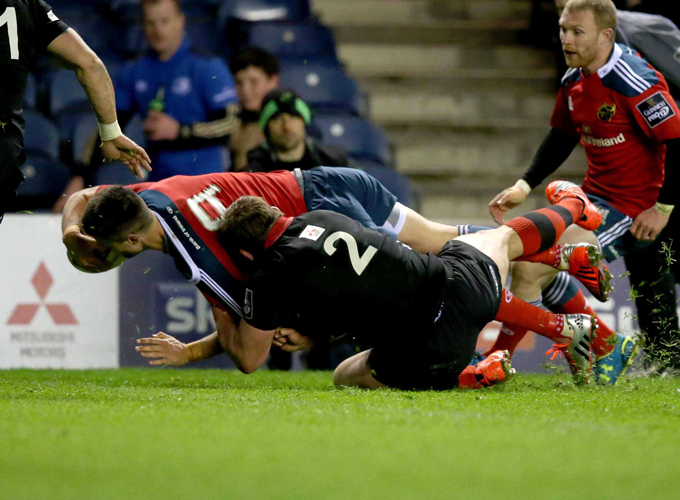 Munster made a serious statement of intent at Murrayfield tonight as the battle for PRO12 play-off places continues, running in five tries in comprehensively defeating Edinburgh. The game also saw Simon Zebo become Munster’s leading try scorer in the history of the league.

A sprightly start from the hosts saw them go through the phases, making yards as they went and eventually forcing Munster to cough-up the game's opening penalty with Edinburgh camped on the try line. Tom Heathcote duly made it 3-0 on 5 minutes.

Munster for their part were impressive in their first venture into Edinburgh territory, making good yardage from each collision and displaying serious physicality. However, a knock on in contact just inches from the try line presented the Scotsmen with the chance to clear their lines

A lack of precision would cost Anthony Foley's charges in the opening 20 as they struggled to hit their stride, failing to secure possession from their first attacking line-out and later infringing in their own attacking maul.

Offside from Edinburgh would eventually allow Ian Keatley to get Munster off the mark on 20 minutes.

Slowly but surely, the province began to click and constantly threaten the Edinburgh whitewash, Felix Jones doing well to charge down and claim an attempted clearance, but the subsequent kick through from Keatley was just too far ahead of the oncoming Simon Zebo – the ball beating him to the end-line.

As Munster received threats of yellow cards for repeated infringements at scrum time, so too did the hosts, theirs for persistently pulling down the dominant Munster maul.

One such threat from referee Ian Davies presented Munster with a kickable penalty, however, recognising their superiority in the maul, Munster went down the line – a decision that paid dividends with Duncan Casey crossing for the opening try of the game on 34 minutes.

Keatley’s conversion gave Munster a seven point cushion that would take them to the interval.

The set piece that had been somewhat stop-start for the province in the opening 40, would become a well-oiled machine as Munster put Edinburgh to the sword in the second half.

Again sensing their ascendancy in the maul and knowing the importance of every available league point, Peter O’Mahony and co. repeatedly kicked to touch and drove for the line, the net result of which was CJ Stander’s seventh league try of the season on 51 minutes.

Neat interplay and pace from Keith Earls and returning speedy prop James Cronin brought Munster straight back into the Edinburgh 22 from the restart. With Tim Visser yellow carded for holding on to Cronin in the tackle, unsurprisingly Munster kept faith with their fruitful maul and kicked down the line from the resultant penalty.

Despite a knock on the first time of asking, advantage allowed Munster to go again and this time it was man of the match Conor Murray who pounced from the back of another driving maul for the visitor’s third try. Keatley slotted the extras to give Munster a 19 point lead on 57 minutes.

Five minutes later and the bonus point was secured as Simon Zebo scored in style to become Munster’s leading try scorer in the history of the league – 23 tries – and trust Zeebs to break the record in style. A neat kick ahead from Felix Jones saw the winger in another footrace with the ball as it raced towards the end-line. This time, the Cork-man won the battle, getting a fingertip to the ball as he dived at full stretch. After a lengthy deliberation with the TMO, Davies adjudged Zebo to have applied downward pressure on the ball and awarded the try.

With a maximum point return from the trip to Scotland secure, the icing on the cake came from Keith Earls. In similar fashion to what we witnessed against Connacht at Thomond Park a fortnight ago, Denis Hurley again kicked though for the oncoming Earls who secured Munster’s fifth try of the evening.

Keatley’s conversion made it 3-34 with 15 minutes to play and despite a resurgence from the home side, Munster’s defence held firm, protecting a comprehensive lead that may well prove crucial in the league standings should points difference come into play.

Munster’s next competitive Guinness PRO12 action is at home to Benetton Treviso at Irish Independent Park, Cork in a fortnight’s time (Saturday April 25th KO 3.05pm). Be there to show your support as Munster look to consolidate their play-off position and battle for a home semi-final.

Tickets from €;15 can be purchased online by clicking here, from the Munster Rugby Ticket Offices at Thomond Park or Irish Independent Park, or by calling 0818 719 300. 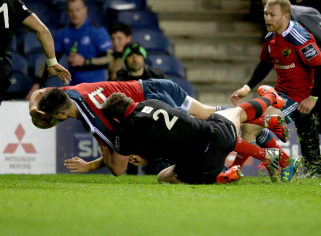