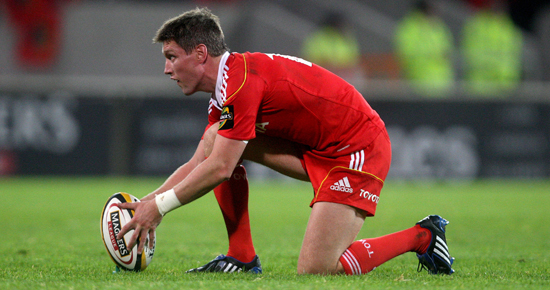 Derby clashes are never the ideal occasion to get things back on track and the Sportsground is one of the hardest places for Irish sides to visit as Munster will find out once again this evening.

Munster travel with a much changed side from the one that disappointed against Ospreys last time out and they give a first start to Paddy Butler at number eight and pair Ian Nagle and Donnacha Ryan in the second row while Kiwi Peter Borlase is in at thight head prop where he will come under a fair degree of scrutiny after Munster's tribulations in that area in Swansea.

Paul Warwick, who departs at the end of the season is at full back with old reliables Ronan O'Gara and Peter Stringer at half back.

Munster are four points clear at the top of the table with the chasing pack, Cardiff Blues excepted, playing each other which makes this an even more crucial game if Munster are to keep some daylight between themselves and the rest.

Given the composition of the Munster side, plus the fact that this is probably one of the games Eric Elwood has targetted, the bookies have Connacht's favourite and it will need a special effort if the Ronan O'Gara led Munster side are to upset the odds.

Munster Tough It Out 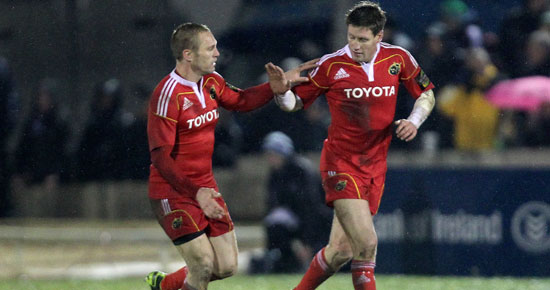 In conditions far from unusual for the Sportsground at this time of year, Munster showed courage and commitment and no shortage of resolve to eek out a narrow 16-12 Magners League victory over Connacht.

In a game that ended with Munster desperately defending their line as Connacht launched attack after attack, it required every Munster player to put their bodies on the line and this they did with admirable regularity.

It was a far from perfect performance by the League leaders who along with injury and national dictat, were showing 12 changes in personel, started with debutant Paddy Butler at number 8, lost the experienced Alan Quinlan with 35 minutes to play and ended with 14 players when Niall Ronan was yellow carded late in the game.

At that stage Munster were under the cosh, having just lifted the siege on an earlier Connacht assault, and when Dave Ryan went down injured in the closing minutes, Wian du Preez was brought back on, a move that Connacht coach Eric Elwood, for some reason took issue with.

In the driving rain that started just before kick-off it was never going to be classic and Ian Keatley opened the scoring with a 4th minute penalty. With the rain at their backs Connacht enjoyed the territorial advantage but never offered a sustained threat to the Munster tryline.

Ronan O'Gara who had an industrious and influential night, tied the game with a 9th minute penalty before Keatley restored Connacht's lead in the 14th minute when Munster were penalised at scrum time.

O'Gara was just short from the half way line, Keatley missed one he really should have nailed and with just three points separating the sides at the break, the smart money was on Munster.

And so it proved. The rain stopped for a while. Keatley and O'Gara swopped penalties before the Connacht 10 landed one from halfway to push his side six points clear.

It was a lead that, in the conditions, should have been good enough but Munster galvanised themselves, O'Gara gave them direction and after a period of sustained pressure Tom Gleeson gave them the try.

Having denied a series of drives for the lines, Connacht cleared and gave themselves a little breathing space. However Munster kept up the pressure and when Barry Murphy hacked through, Gleeson showed good pace to claim the touchdown.

O'Gara's touchline hugging conversion put Munster one point ahead and it was that man O'Gara again who widened the gap with a neat drop goal four minutes later.

It ended with a sequence of Connacht five metre scrums, last gasp Munster defence and a Munster win that leaves them seven points clear at the top of the table. 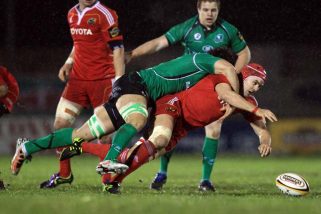 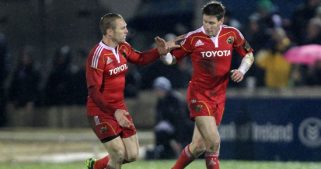 Munster Tough It Out