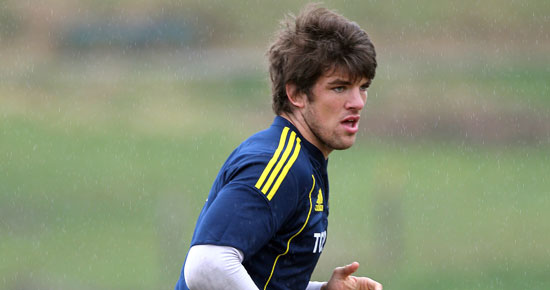 There’ll be a little bit more to tomorrow night’s Magners League than first versus second in the Magners League table when Munster and Leinster meet at Thomond Park Stadium.

The rivalry between the sides has existed since day dot and although hardly anymore intense since the advent of professionalism, according to those who plied their trade in those halcyon (?) amateur days, has certainly provided an edge that makes Munster/Leinster matches ummissable events in the rugby calendar.

Leinster arrive in Limerick tomorrow in the unusual position of being slight favourites – despite the absence of Brian O’Driscoll – and with a clear four point lead plus game in hand that means an eventual ‘home’ semi-final is theirs only to lose.

Deasy, along with Dave Ryan and Mike Sherry have been added to Munster’s Heineken Cup squad for the knock-out stages and all three have impressed in their Munster outings this season.

Between them, Gleeson and Deasy have amassed just 10 senior competitive caps in sharp contrast to their fellow Corkonian Donncha O’Callaghan who tomorrow pulls on the Munster shirt for the 160th time.

"Why do I suddenly feel old." O’Callaghan asks when you mention the stat. "Maybe it looking at the likes of Tom and Scott makes me feel that way." he continues, "but it’s great to see them coming through even if they’re from Pres," says Christian’s product O’Callaghan with a grin.

"That’s one of the great things about this Magners League, it’s gives those lads the opportunity, raises their standard of play.

And O’Callaghan would have no qualms about throwing them into the cauldron that is a Munster/Leinster derby. "There’d be no fear of them, " he says. "They’re confident fellas, have the skills sets to compete with the best, never let ye down.

But it’s the likes of O’Callaghan and the senior pros that people will look to tomorrow in what he says will be a massive challenge. "It always is when we play them. Local derbies have that extra edge, this one has that and a little more. It’s Cork an Kerry or United and City. Its the game you want to win. And they’re the same.

"It doesn’t matter what competition it is Magners or Heineken, this sort of game is right up there with internationals in terms of physicality, intensity. Mistakes are normally punished to the full, there’ll be very little or no room for error.

"But these are the type of games that running around in the freezing wind, sleet and rain that we had in Clanwilliam on Tuesday are all about."

And the absence of O’Connell and Earls ? "That’s a blow, no doubt about it." he admits. "But they’re missing Drico, Shane Horgan and a few more we hear. But we’d have full confidence in the side selected. We know what we have to do. This about who’s on the pitch not who’s not." 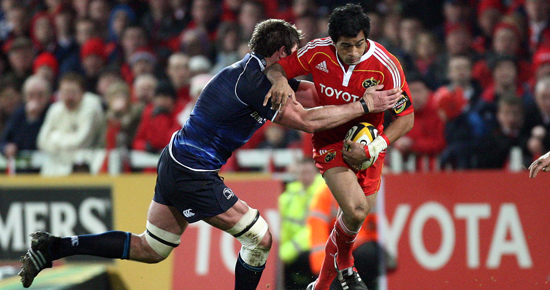 It was one they fully deserved and virtually guarantees them a home semi final scheduled for the weekend of May 15th and also leaves them in rude good health for the Heineken Cup quarter final clash with Clermont Auvergne next weekend.

Munster were architects of their own downfall once again conceding too many penalties and somehow managing go into the break trailing by a point after enjoying the better of the exchanges in that opening half.

They were leading 12-6 when Sexton missed a straight forward penalty in first half injury time but from the restart they failed to deal with a garryowen and then a chip ahead that bounced kindly for Rob Kearney to score in the corner. Sexton atoned for his earler miss with a superb conversion and it was the visitors who went into half time with a very definite pep about their step.

In truth the deficit could have been much greater because Gordon D’Arcy butchered a great try scoring opportunity and minutes later with Leinster in possession at a ruck under the posts, Munster’s right flank was totally barren with four Leinster backs screaming for ball. That threat ended with the concession of a three pointer when it should really have been seven.

The second half ended three points apiece but Munster really never troubled a rock solid Leinster and in truth at no stage in the game did they look remotely like crossing the Leinster line. It was O’Gara who kept them in touch with five kicks from five attempts and the Corkman certainly looked far more composed than his opposite number.

However, in most places around the park it was the Leinster players who won the personal battles, with the exception of centre and lock where Jean de Villiers looked a class act and Mick O’Driscoll as usual worked his socks off. Jerry Flannery also made an impressive return to action before being replaced in the 68th minute.

It was Leinster first win in Limerick since 1995 and it was the third successive time Munster have failed to score a try against their arch rivals. 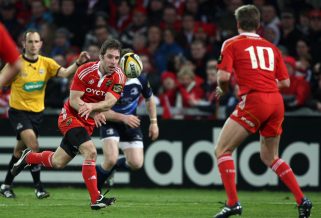 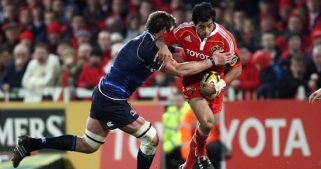