Four Changes Made For Ospreys 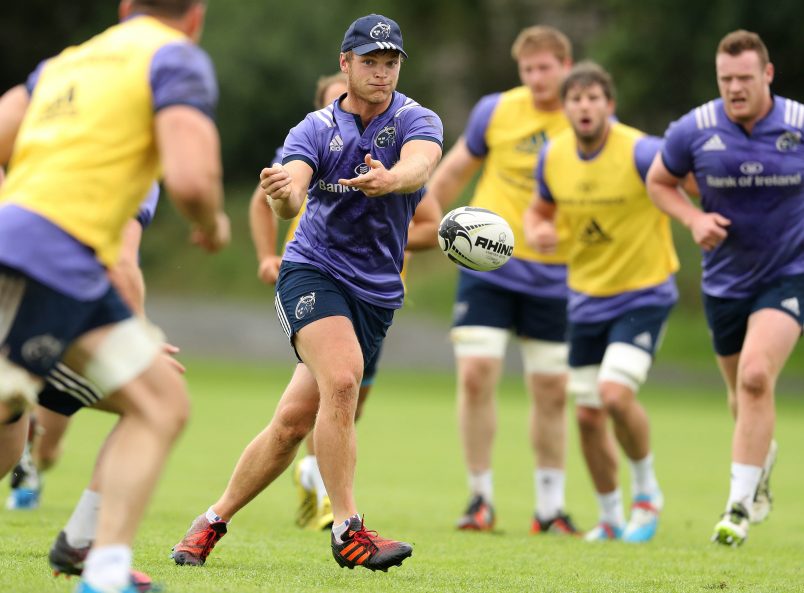 Stephen Archer comes in to join Dave Kilcoyne and Niall Scannell in the front row while Darren O’Shea and Robin Copeland form a new partnership in the second row. No change in the back row with captain Peter O’Mahony, Tommy O’Donnell and Jack O’Donoghue all remaining in situ.

The final change is seen in the half backs where Tyler Bleyendaal returns to partner Duncan Williams.
Try scorers against Ulster, Rory Scannell and Jaco Taute, again take charge of midfield with a back three of Ronan O’Mahony, Darren Sweetnam and Andrew Conway completing the starting XV.

Linking up with the squad this week, new signing Rhys Marshall is named in his first matchday squad. The hooker joins from Super Rugby side the Chiefs after penning a three-year deal that will see him stay with the province until June 2019.

Should they appear from the bench, development prop Peter McCabe and Young Munster scrum half Abrie Griesel will make their first PRO12 appearances.

Tickets can now be purchased online here and from the Munster Rugby Ticket Offices in Irish Independent Park and Thomond Park, or at the ground on matchday.


All those attending the game can avail of FREE PARKING at the Black Ash Park & Ride courtesy of Munster Rugby. Click here for full Munster v Ospreys ticket and matchday information.

Munster Flourish In Cork Sell Out 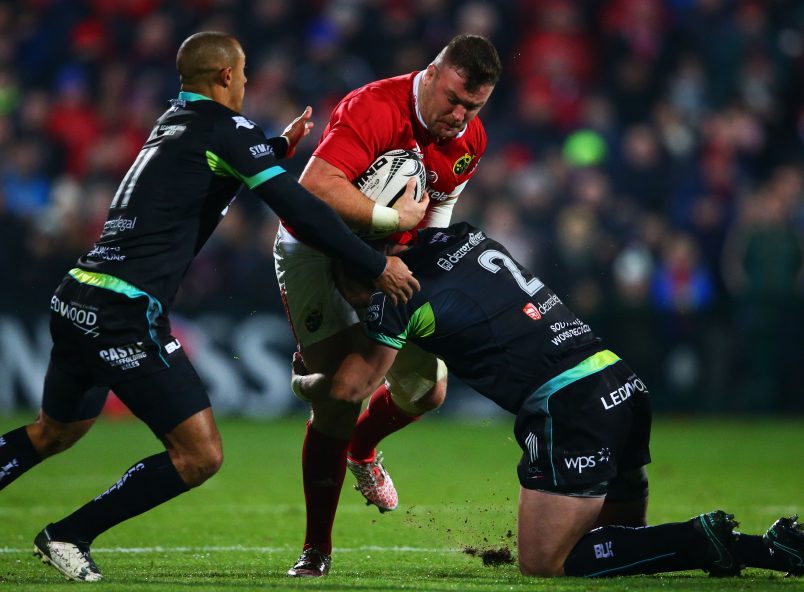 Munster crossed for five tries and rendered the league’s top try scorers Ospreys scoreless as they ran out 33-0 winners in front of a sold out Irish Independent Park in round 8 of the Guinness PRO12.

A rampant start for the Munster men from 1 to 15 saw them out to a 14-0 lead with less than a quarter played. Dave Kilcoyne bagged the first try with Darren Sweetnam extending the home side’s advantage soon after and such was Munster’s dominance in open play and set piece, Ospreys' visits to the Munster 22 were very few and far between, only reaching the 5 metre line on one occasion in the opening half.

Solid at scrum time, Munster dominated the lineout, safely securing their own set-piece ball while Munster steals were the order of the day on the Ospreys put in. The visitors did not aid their cause when loose passing while attempting to exit the 22 saw Ronan O’Mahony pounce for the first try of the second half before Kilcoyne completed his brace and Robin Copeland crossed for Munster’s fifth with just minutes remaining. Add to this the precision of Tyler Bleyendaal’s boot for the extras and Munster were, to all intents and purposes, out of sight with a quarter still to play.

The was an air of inevitability from the off, excellent takes and breaks from Sweetnam and O’Mahony and excellent breakdown work across the park set the tone early on. That effort was justly rewarded on 9 minutes when Munster’s dogged determination at the breakdown saw Kilcoyne cross after excellent phase work from left right across the Ospreys line. Peter O’Mahony, Jaco Taute and O’Mahony, to name a few, all made good yards before Kilcoyne sniped around the left fringe for the game’s opening try.

Much to the delight of the Cork crowd, Bleyendaal made easy work of touchline conversion and Munster were out to a 7-0 lead.

On 13 minutes Munster were in for their second. Turning over an Ospreys lineout just inside the visitor’s 22, the pack made the hard yards before wonderful interplay from Duncan Williams, Bleyendaal and O’Mahony brought the latter just short of the line where the ball was recycled quickly to send Sweetnam over in the corner.

Bleyendaal was again inch perfect with the touchline conversion.

A penalty kick to the corner by Josh Matavesi on 36 minutes put Ospreys on the Munster 5 metre line for the first time in the game, but much like it had done in Ulster, the province’s defence held firm and there was no way through for the Welshmen as they pounded the Munster line.

No let up on the intensity and pressure from Munster upon the resumption and that pressure told on 55 minutes when a loose pass from Ospreys as they attempted to exit their 22 provided the lurking O’Mahony with ample opportunity which he duly took. Hacking ahead the loose ball, the winger – who makes a habit of scoring tries in Irish Independent Park – then gathered and touched down on the left wing for Munster's third.

On this occasion Bleyendaal was marginally to the right with the extras, his first miss in 13 kicks.

With ten to go, Munster bulldozed their way through copious phases and we’re relentless in their ambition to bag the bonus point. Cheered on by a vocal and packed Irish Independent Park, Munster would eventually barge through for their fourth, none other than man of the match Kilcoyne touching down for his second of the night with Bleyendaal making it a full seven-pointer.

The icing on the cake was very nearly provided by Sweetnam and Keatley, the winger kicking and claiming his own kick before beautifully offloading to the oncoming Keatley who was held up just short.

However Ospreys merely prolonged the inevitable and Copeland – reverting to the back row for the final few minutes of the game – broke from the back of the solid Munster scrum to make it five tries to the men in red.

Bleyendaal’s conversion brought the score to 33-0 and rounded off a fully deserved and comprehensive win for Munster over Ospreys.

PRO12 round 8 round up: The win sees Munster provisionally top the Guinness PRO12 table with round 8 games to be completed tomorrow.

In his first week with the squad, new signing Rhys Marshall made his PRO12 debut as did development prop Peter McCabe and Young Munster scrum half Abrie Griesel.

Darren O'Shea and Robin Copeland formed a new second row partnership for Munster in the PRO12 while from the academy ranks, Conor Oliver and Brian Scott both saw game time this evening.

Robin Copeland spoke to MunsterRugby.ie after the game… 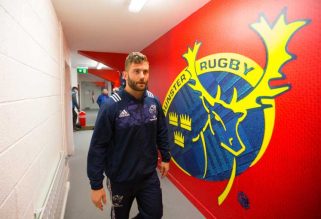 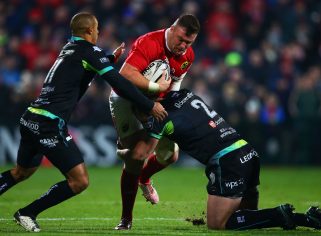 Munster Flourish In Cork Sell Out 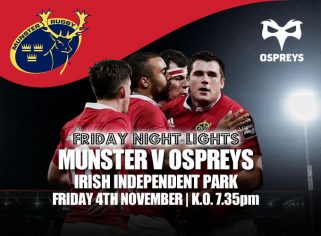 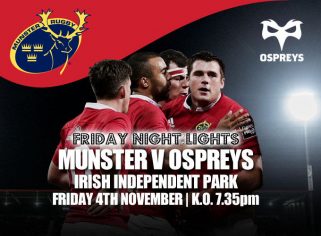