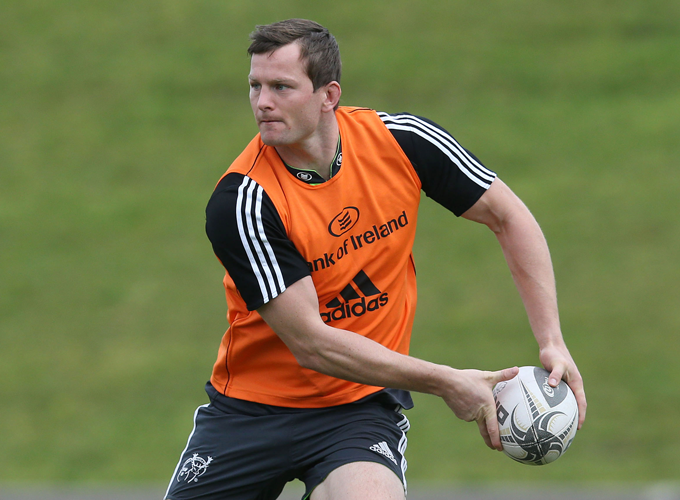 Foley again names Denis Hurley as captain. The Cork-man will lead the province for the third consecutive game.

An all new front row sees John Ryan and BJ Botha start on either side of Eusebio Guinazu.

Donncha O’Callaghan and Billy Holland continue in the second row with Jack O’Donoghue and Sean Dougall coming in to join CJ Stander in the back row.

As you were in the half backs and midfield with Duncan Williams, Ian Keatley, Denis Hurley and Keith Earls all retaining their starting positions, while two further changes see Ronan O’Mahony and JJ Hanrahan come in to join Andrew Conway in the back three.

After successfully rehabbing a knee injury sustained against Clermont Auvergne in December, centre Andrew Smith returns and is named amongst the replacements.

Less than 2,000 tickets now remain for the game which will also mark the official opening of Munster Rugby's new Cork home. Adult tickets from €;20 and Family Tickets from €;40 can be purchased online by clicking here.

Tickets can also be purchased from the Munster Rugby Ticket Offices in Irish Independent Park and Thomond Park, and on matchday; outside the Dolphin Gate from 12 midday, and from 5.45pm at the Sunday's Well gate. 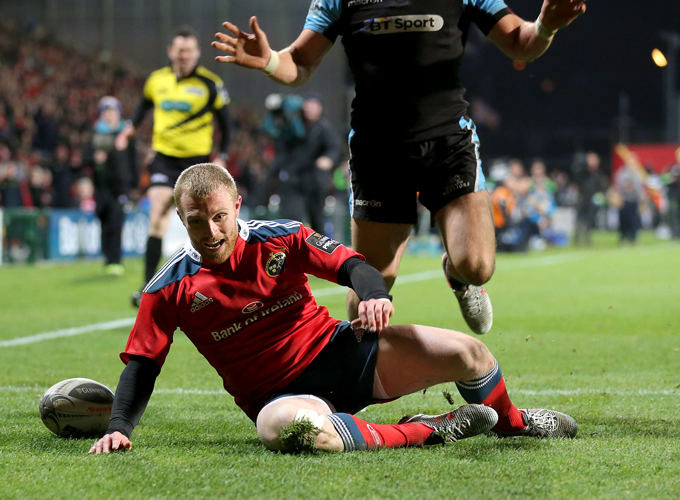 Munster laid to rest the demons of three losses on-the-bounce to Glasgow Warriors, with a comprehensive bonus point win over the Scotsmen at Irish Independent Park in Cork tonight.

With tries from Jack O’Donoghue, Eusebio Guinazu, man of the match Keith Earls and CJ Stander, the win sees Munster overtake Warriors at the top of the Guinness PRO12 table on 53 points.
Munster impressed from the off, looking sprightly in attack and playing high tempo, heads-up rugby – an approach that served them well a fortnight ago against Cardiff Blues, also in Cork.

Captain Denis Hurley led by example, combining well with Earls to pioneer chances though the midfield. It was Earls who led the charge on two occasions in the opening half, showcasing beautiful footwork and searing pace as he nullified the Warriors defence in bringing Munster deep into the visitors’ 22. However, a lack of precision in the final phases of attack would spoil both chances as knock-ons ended the Munster advances.

The hosts continued to play the opening 40 very much on their own terms, with the pack also laying down a marker at set piece. A scrum penalty scrum presented Ian Keatley with a chance to open Munster’s account but his execution was just to the left and wide.

The ever threatening Nikola Matawalu proved to be at his potent best for Warriors, dancing around 4 Munster defenders before Keatley and Duncan Williams managed to bring him down, but not before he brought his side within meters of the Munster line. However, much likes their hosts, the final pass would let them down – knocking on and awarding Munster another scrum penalty from the subsequent set piece.

Munster eventually made their pressure pay. A poor clearance from a creaking Warriors scrum saw the opportunistic Ronan O’Mahony take a quick line out and set up a good attacking platform. From there, Keatley exploited the gap as Warriors struggled to set their defence. The ever promising Jack O’Donoghue then took the ball on the fly-half’s shoulder and the Waterford native touched down on practically the same spot where he secured his first Munster try in the aforementioned Blues encounter.

Hurley, Earls and Keatley continued to poke holes in visiting defence, and that combined with beautiful offloading across the park brought Munster within inches of the line yet again. O'Mahony looked to have added to his impressive tally of tries at Irish Independent Park, however referee Nigel Owens had already blown for a Glasgow infringement.

Still with the advantage, Munster opted for the line out maul and made good yardage before Eusebio Guinazu broke from the back to touch down for his first Munster try on 37 minutes.

Keatley was on target with the extras and Munster led 12-0 at the break – heading to the dressing room to rapturous applause as fans showed their appreciation for one of Munster’s most impressive 40 minutes of the season.

As expected, Warriors emerged from the interval a more formidable outfit, maintaining more of the possession and gaining greater yardage.

Greater parity at set-piece saw them secure their first scrum penalty, however fly-half Connor Braid was off target with his first attempt at goal. Another chance for Braid came just seconds later as Munster went in off their feet and that saw him reduce the deficit to 9 points on 52 minutes.

The Scotsmen placed themselves firmly back in contention with the game’s next try – prop Rossouw de Klerk coming from deep and with great pace to break through the midfield and drag the covering defence over the tryline, with Braid converting.

Not to be outdone in front of a home crowd, Munster struck back in emphatic style through Keith Earls on the end of a perfectly weighted Keatley grubber. The pick of the tries, the centre used his feet to beautifully flick the ball into his hands – Zebo-esque – and run in on the right comer.

With momentum firmly back with Foley's men, they struck again on 66 minutes, using their dominance up front to good effect as they mauled over the line, this time in the left corner with CJ Stander touching down for his 6th try of the season and extending Munster’s cushion to 12.

In reply, the visitors then went through numerous phases, battering the Munster defence within inches of the try line. A defiant home defence kept them at bay for almost 10 minutes before Warriors thought they had secured a losing bonus point through replacement Lee Jones try on 75 minutes. Not to be though and it was just deserves for the Munster defence when then TMO adjudged O’Mahony had put the winger in touch before grounding the ball – more importantly denying Warriors a losing bonus point and ensuring that Munster go top of the Guinness PRO12 table.

A 22-10 win for the province. It could have been more were it not for some opening half handling errors, but all in all a good day’s work for Anthony Foley’s charges. 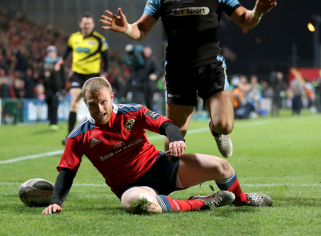