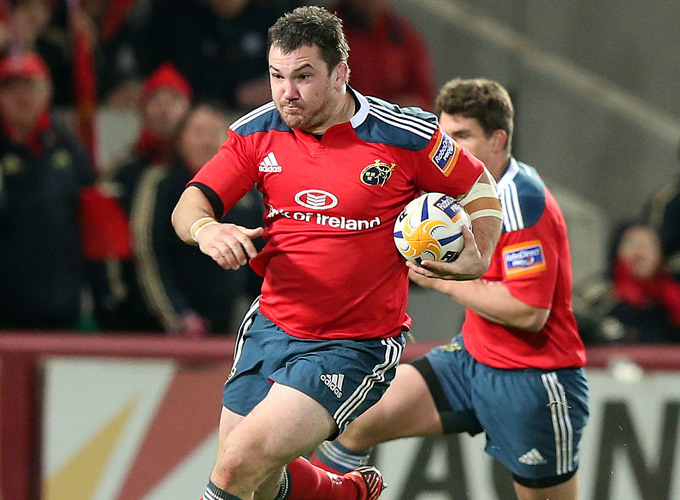 The Munster squad to face Cardiff Blues in round eight of the RaboDirect PRO12 has been named today.

Felix Jones, Donncha O’Callaghan, James Coughlan, Stephen Archer and Mike Sherry have all been released from the Irish camp with Jones starting at full-back and the latter among the replacements.

Munster Head Coach Rob Penney has made five changes to the side that beat Ospreys in Munster’s last outing at Thomond Park.

Dave Kilcoyne drops to the bench with James Cronin coming into the front row alongside BJ Botha and Damien Varley who captains the side.

The only other change in the forwards sees Billy Holland return to the side ahead of Donncha O’Callaghan and he joins fellow lock Dave Foley in the starting XV.

There are three changes in the backs with Cathal Sheridan coming in for Duncan Williams at scrum half and JJ Hanrahan will earn his 20th cap for Munster as he replaces the injured Ian Keatley at out-half.

The centre partnership of Ivan Dineen and former Cardiff Blue Casey Laulala remains intact with Andrew Conway coming back into the side.

Academy player Johnny Holland is named on the bench and could make his first RaboDirect PRO12 appearance for Munster, the 22-year-old out-half plays his club rugby with Cork Con and featured in the SEAT Series against Gloucester and London Irish but has yet to make his competitive bow.

The returning Denis Hurley is also named among the replacements after a spell on the sidelines with a knee injury.

Ian Nagle is on the comeback trail too and, although he has not been named in the Munster squad, could feature for Cork Con this weekend. 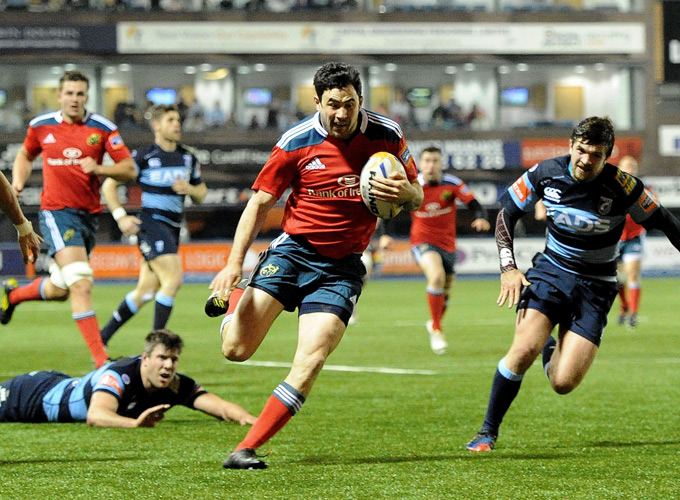 Blues out-half Simon Humberstone missed an opening penalty chance after 2 minutes when Damien Varley was penalised for a high tackle, but Munster coughed up an easy three points 10 minutes later in front of the posts and Humberstone made no mistake with his second attempt at goal.

A superior Munster scrum inside the Cardiff half resulted in a quick tap and go, and as the ball was flashed out wide Cardiff centre Gavin Evans slipped and man of the match Casey Laulala seized the opportunity to break the Blues defence. He then popped a great offload to Felix Jones who powered through for the opening try of the evening. JJ added the extras to give Munster a 7-5 lead after 17 minutes.

Minutes later Hanrahan opted to chip through the Cardiff defence and Johne Murphy was on hand to gather the perfectly timed bounce, but the ball spilled forward. The next break came from CJ who barged his way through the centre and made the yards well in to the 22, but Cardiff reclaimed possession when they were quick to seize the exposed ball at the back of the ruck.

Captain Damien Varley touched down for Munster’s second score as he stretched for the line with Andries Pretorius in tow and referee David Wilkinson consulted the TMO before awarding the try. JJ duly stepped up again to fire over his second conversion.

The attacking momentum continued and minutes later James Cronin was diving over for try number three as he found himself in an unopposed backline with Laulala and Conway outside him. It was Cathal Sheridan who had initially blocked and claimed Humberstone’s clearance to give Munster the attacking opportunity.

Munster finished the half with a Hanrahan penalty after Cardiff were ruled offside and they led 24-3 going in at the break.

The pressure continued when play resumed and Sean Dougall was quick to charge down a Cardiff kick after which Munster went on to score in the resulting phase of play. It was Casey Laulala who threatened once again, drawing the defence he made the pass to Felix who fired the ball out to Conway sprinting down the far wing to run in Munster’s fourth and bonus point try in the right hand corner. Hanrahan made it five out of five with his impressive touchline conversion.

When reduced to 14 men after Stander was carded for coming in from the side Cardiff took advantage and scored their only try with hooker Kristian Dacey claiming the spoils. The infringements continued for Munster and Mike Sherry picked up the second yellow with ten minutes remaining and despite the home-side applying the pressure Munster had done enough in securing the bonus point victory, holding on to top spot in the Rabo table. 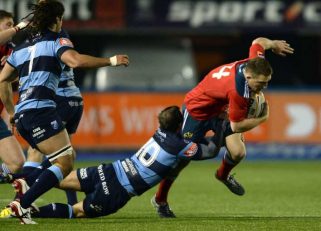 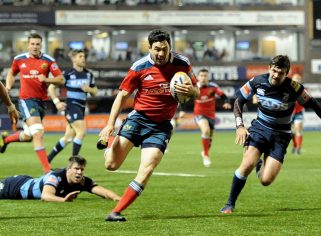