There can be absolutely no ambiguity over what’s required from this afternoon’s Heineken Cup clash between Munster and Edinburgh Rugby at Thomond Park Stadium (12.45).

Simply put whoever loses can almost certainly kiss goodbye to any hope of being involved in Heineken Cup fare after January. Munster didn't quite close the door on themselves when they let a narrow lead slip in the closing stages of the Racing game. The bonus point means it's slightly ajar. But defeat today and fingers will be caught as it slams shut.

Edinburgh, last year's beaten semi-finalists, have no room for manoeuvre. Lose today and it would require a recovery of seismic proportions to see them involved in the latter stages.

A lot has been made of Munster's failure to close out that game last weekend in Paris and it's to be hoped the players will have put it behind them. "All we can do, week to week, is keep trying to build. Keep trying to grow. And keep trying to get better. And on the back of that hopefully the performances will end up having positive outcomes." Coach Rob Penney says before sounding a cautionary note.

" But we don't control everything in the game . Y'know there's another 15 guys on the opposition trying to do exactly the same thing. And if they happen to be better on the day it makes it difficult."

Whatever about better on the day, it can be taken as read that the Edinburgh we see today in Thomond Park Stadium will be better than the side that were kept scoreless and shipped 45 points against Saracens.

Last time the sides met, in Murrayfield in September, Tim Visser skipped in for three tries. But Munster won.

Ian Keatley was the out-half that day and today he wears the mantle of playmaker (10) for the first time in Heineken Cup rugby. In Murrayfield Keatley scored a try and was deadly accurate with the placed ball kicking 3 penalties and two conversions.

Munster will need him to be in a similar frame of mind today.

But central to that victory on September 1st was the end-game defensive performance.

And Munster will need a similar mindset in that department as well today.

It started with a numbingly ordinary first half, and ended old school, in front of 22,000+ noisy spectators, with a penalty to the corner and surge for the Damien Varley try that gave Munster a bonus that didn’t look remotely likely with less than ten minutes to go.

Munster dominated this game from start to finish and to such an extent that Edinburgh visits to their opponents 22 were as rare as hen's teeth.

Despite all their dominance however they were only 6-0 up at half time and with 71 minutes gone had just one try scored as they held an unassailable 16-0 lead.

But by then Edinburgh were totally out on their feet and tries from Peter O'Mahony, the ever impressive Sean Dougal and replacement Varley earned the bonus that could be every bit as valuable as they one they took from Paris.

With the November internationals approaching , watching Ireland coach Declan Kidney will have been delighted with the form of Paul O'Connell and Donncha O'Callaghan who almost latched onto an Ian Keatley cross-field kick – on the wing of all places – mid way through the first half for what would have been a spectacular try.

Conor Murray put the horror of Paris firmly behind him with an error free authoritative display, Dougall will have caught the eye of the Ireland boss and so too Dave Kilcoyne whose progress under Paul McCarthy has been impressive.

Keatley kicked Munster into a 4th minute lead but was badly wide from close in with his next effort and on the money with a second in the 24th minute.
Murray did well to score under the posts in the 51st minute and added a penalty six minutes later. But they were almost through the final quarter before they ratcheted it up to run in three tries, Keatley proving the inspiration for the Dougal one and Varley scoring off a rehearsed line-out move.

Speaking afterwards Rob Penney agreed that a similar performance would, 'probably not' be good enough when Saracens visit in Round 3. "We just hadn't capitalised and got the rewards," he said Penney of the first half performance.

"We needed to improve on our ball security, our ability to capitalise on the space that's provided for us, and that space happened on about five or six occasions today."

“The bonus point could be really important,” he continued. “We’ve a couple of massive games before Christmas so we’re masters of our own destiny in that regard. If we do well, we’re in the hunt whether we get bonus points or not. We still have to beat Saracens to keep ourselves in it. Than was always the case." 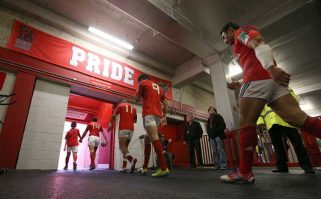