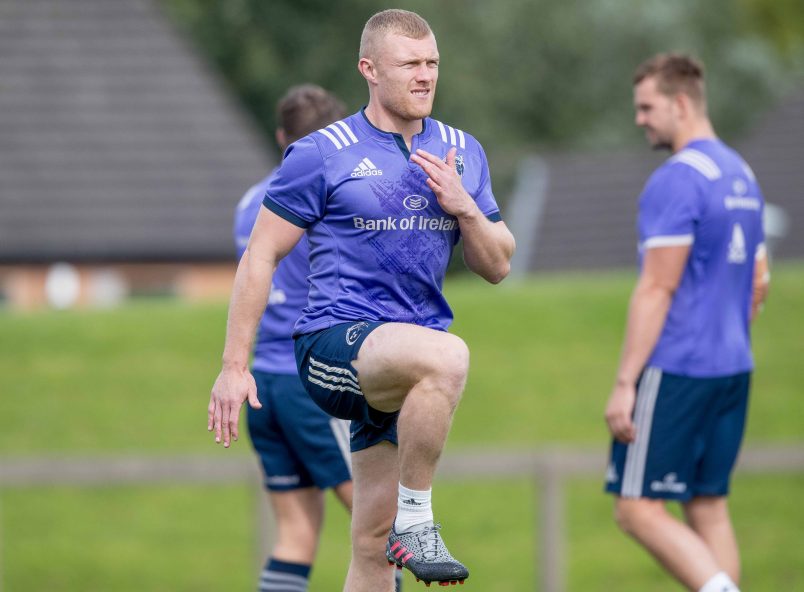 Director of Rugby Rassie Erasmus has made five personnel changes for tomorrow’s Guinness PRO12 round 4 encounter against Edinburgh at Thomond Park with centre Cian Bohane in line to make his first competitive start for the province.

Bohane’s inclusion in the starting XV sees the Corkman form a brand new centre partnership with returning international Keith Earls who has made a speedy recovery from the tight hamstring that saw him withdrawn from last weekend’s encounter in Newport.

Elsewhere, Dave Kilcoyne will make his first start of the season in the front row while the return of Dave O’Callaghan at 6 sees captain Billy Holland – the PRO12’s leading tackler to date – revert to the second row.

The final change comes in the back three with Ian Keatley to start at full back. One of only three players to have scored in excess of 1000 points in the PRO12 (1266), Keatley needs just 5 points to reach the 1000 mark for Munster across all competitions.

Should he appear from the bench, recent academy graduate and Ireland Men’s 7s representative Alex Wotton will make his first competitive appearance.

Successfully rehabbing a neck injury, Stephen Archer is included in the matchday squad for the first time this season. 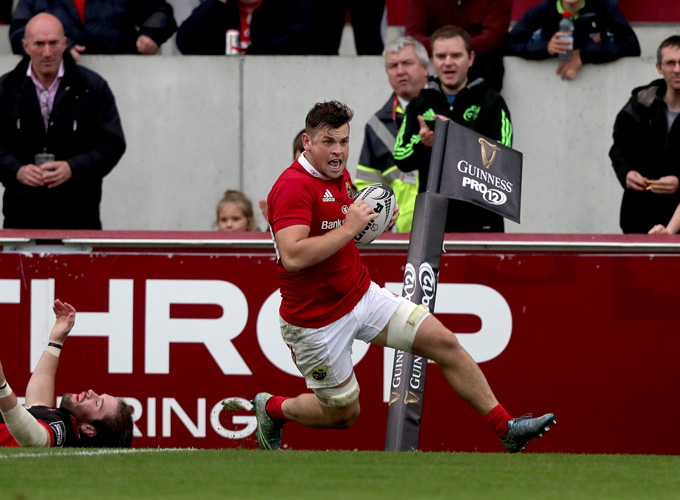 In their first game at Thomond Park this season, Munster record a deserved bonus point win over Edinburgh, crossing for four tries in a 28-14 victory.

Poor control at the breakdown made it all too easy for Edinburgh’s Chris Dean as he crossed for the opening try of the game, but Munster’s reply was swift, Conor Murray crossing twice off the back of a dominant Munster scrum to lead 14-7 at half time.

Academy back row Conor Oliver showed some serious gas to get Munster off to a flyer in the second half and back row Dave O’Callaghan bagged the bonus point try in the final quarter with Tyler Bleyendaal instrumental in both scores.

The New Zealander also had an exemplary afternoon from the tee, landing all four conversions.

Munster’s scrum was the story of the game, picking up from where it left off last weekend and driving Edinburgh back with each hit. In the opening minutes, two back to back scrum penalties allowed Munster relieve the pressure when the hosts mounted some early attacks in the Munster 22.

Then, after winning the next scrum against the head, subsequent phases saw Munster force their visitors into coughing up the first kickable shot for three. In front of the posts, but some distance out, Beleyendaal’s opening effort had the legs but went just right of the posts.

Munster then had the man advantage when Fraser McKenzie saw yellow for a clumsy tackle that resulted in a nasty clash of heads with Jack O’Donoghue and that would be the Munster openside’s final action of the game, having to be replaced by academy back row Oliver on just 12 minutes.

Hugely impressive line speed from Munster gave Edinburgh little return for their early possession, at one stage driving the visitors attack from well inside the Munster 22 to back beyond the 10 metre line and then forcing another penalty.

However Munster failed to display the same composure in attack. Knock ons, holding on and loss of possession at lineout and maul time all gifted possession back to the Scotsmen with Munster seeing precious little of the Edinburgh 22 in the opening 20 minutes.

Failing to release handed Duncan Weir Edinburgh’s first shot at goal from the half way line and, much like Bleyendaal’s opening attempt, the distance was there but he pushed it slightly to the right.


The men in red were dealt a serious blow on 23 minutes when lack of control gifted Edinburgh the first try of the game. With CJ Stander heading into contact, the ball spilled out the side of the breakdown from where Dean picked and went. With the defence not set, the inside centre had pretty much a clear run for the line and Weir made it a full 7 point return with the extras.

Edinburgh may have been able to disrupt the Munster lineout and maul, but as mentioned previously, the same could not be said about the Munster scrum and on 28 minutes, the province showed their dominance on this front.

With their own put-in, Munster drove the visitors back over the tryline and all Murray had to do was dot the ball down for the province’s opening try. Then, in pretty much the same position, on 37 minutes huge Munster pressure saw Edinburgh spill the ball at the back of their defensive scrum. With Munster stealing, Murray was on hand to dive under the Edinburgh defence for his second.

Bleyendaal converted both and Munster took a 14-7 lead into the break.

A superb start to the second saw academy replacement Oliver cross for his first Munster try. An excellent step and offload from Bleyendaal left Oliver with just Weir to beat on the left wing and the back row didn’t disappoint, showcasing both strength and speed in doing so – handing off the Edinburgh playmaker before outpacing him to the tryline.

Bleyendaal bisected the posts with the touchline conversion and Munster lead 21-7 on 42 minutes.

Soon after, excellent interplay from Munster, notably Darren Sweetnam and Murray, had the Edinburgh defence firmly on the back foot again with the hosts eventually winning an attacking scrum just inside the 22. Edinburgh’s fears at set piece were justified, conceding penalty after penalty with replacement tighthead Allan Dell becoming their second player to see yellow.

Due to injury, Edinburgh were unable to field a replacement front row and so the scrums became uncontested. Therefore opting for the corner, there was an air of inevitability that the score would come if Munster could hold their composure. That they did but the TMO adjudged Stander be held up over the line after some solid Munster mauling.

Back to the scrum we went, this time however, Stander was unlucky to spill possession when attempting to ground the ball after a charging run from the back of the scrum.

Hammering away at the Edinburgh defensive line, Munster were eventually given the bonus point score they richly deserved on 56 minutes. Attacking the line with purpose, Bleyendaal floated a wonderful pass along the 22m line for O’Callaghan who broke the tackle and crossed for Munster’s fourth.

Bleyendaal made it four from four with the extras.

Edinburgh looked to mount a comeback off the back of a John Hardie try and conversion from Blair Kinghorn on 68 minutes, but ultimately Munster finished out the game the stronger, playing the final minutes of the game well into the Edinburgh half and running out deserved 28-14 winners.

PRO12 Round 4 round up: Munster’s first game of the season in Thomond Park saw Keith Earls and Stephen Archer play their first rugby of the new campaign.

Off the bench, new senior recruits Darren O’Shea and recent academy graduate Alex Wootton made their competitive debuts for the province.

A total of two academy players were included in the matchday 23, try scorer Oliver and Dan Goggin.

After his first game in charge at Thomond Park, Director of Rugby Rassie Erasmus noted that Jack O’Donoghue went to hospital after a neck injury, but positively, he was back at Thomond Park to meet his teammates at the full time whistle. He will be assessed by Munster medical staff in the coming days.

Erasmus also confirmed that Oliver, Jean Kleyn (both ankle) and Dave O’Callaghan (shoulder) all picked up knocks and will monitored over the next 48 hours.

Next Home Game:
Munster are back at Thomond Park next Saturday, October 1st at 5pm to face Zebre in Round 5 of the Guinness PRO12. Ticket can be purchased online here and at the Munster Rugby Ticket Office in Irish Independent Park and Thomond Park.

After the game we caught up with Conor Oliver. 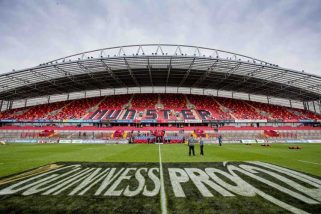 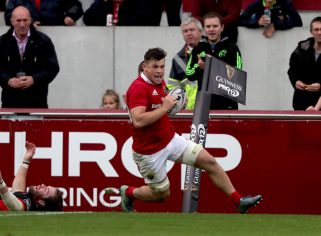