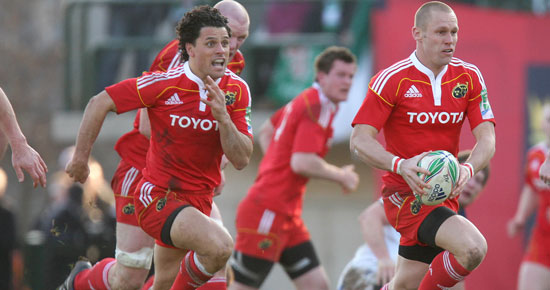 An indicator perhaps of Edinburgh’s intent for tonight’s Magners League clash at Musgrave Park (8pm) is the inclusion of four of those whe were involved in the international a week ago against Wales.

Jim Hamilton, Alan MacDonald, Allan Jacobsen and Mike Blair were all involved in the Millennium when Scotland came so close to a famous victory. Hamilton will partner Scott MacLeod this evening while MacDonald is part of a back-row that includes Roddy Grant and David Callam who will believe they’ll have the edge over their Munster counterparts.

Edinburgh sit in 3rd place in the League table two points clear of tonight’s opponents and while their away form isn’t good – their only away win in their last six trips was 17-16 at Scarlets in the Magners League on December 4th – their 12-7 home win over Munster in round six ended a five game losing run to the Munstermen.

Home form is therefore vital in a League that sees just eight points separating the 1st and 7th placed sides and anything other than a win this evening would seriously damage Munster’s hopes of a top four finish.

They haven’t had a game since losing to Ulster in Ravenhill on January 2nd and although Tony McGahan has had the squad together for the past week at a warm weather camp there is certain to be a degree of rustiness that the Scots will hope to exploit.

However, in what is sure to be a close run affair, if Munster can gain parity up front they would appear to have the cutting edge out wide to gain the upper hand. 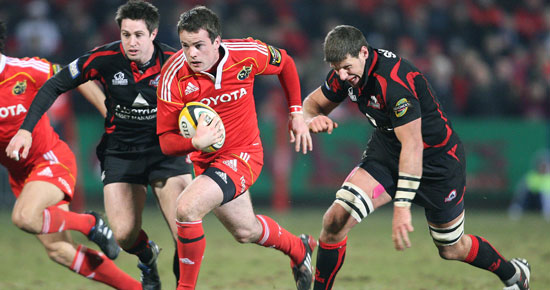 To put their 19-12 victory over Edinburgh in context consider they hadn’t played in over six weeks, lost three players in the space of two minutes in the opening quarter and played twenty minutes of the second half with 14 players.

Out-half Paul Warwick, lock Donnacha Ryan and flanker Niall Ronan were all on the sideline through injury by the 14th minute and this contributed to an absence of cohesion for the opening half. Alan Quinlan received his marching orders in the 51st minute for a ruck infringement but it has to be wondered how assistant referee David Keane missed Scott MacLeod’s 33rd minute uppercut on the same player.

That lead lasted all of two minutes, Blair on the mark from close in before Deasy restored Munster’s advantage with his second penalty. Things might have got even better for the home side as they laid siege to the visitor’s line but Denis Fogarty – impressive in the loose throughout – lost the ball as he drove for the line and it was Blair who gave Edinburgh the advantage going into break after he landed a 39th minute penalty.

Munster were down to 14 and four points adrift after Quinlan’s dismissal but Deasy found the target in the 57th minute and shortly after scored a superb individual try when he raced through the gap, chipped ahead and won the race to get the touch down.

He missed the conversion but landed a 69th minute penalty to stretch Munster’s lead to seven (19-12) before Mafi got his marching for tackling a player without the ball. It forced Munster into some desperate defence in those closing minutes. Twice they had to survive Edinburgh five metre line-out, but survive they did with Horan,skipper O’Driscoll, James Coughlan, Tommy O’Donnell, Billy Holland, Quinlan and skipper Mick O’Driscoll all putting their bodies on the line. When the Scots went wide, replacement Tom Gleeson and Jean de Villiers put in the tackles while Peter Stringer’s performance throughout makes him a live contender to back up Tomas O’Leary in Twickenham. 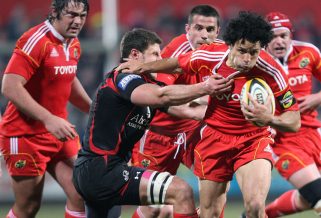 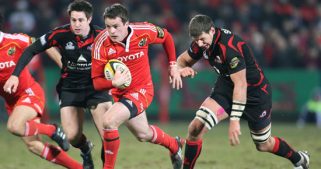