It’ll be no holds barred at Thomond Park Stadium this evening when the pacesetters in the RaboDirect PRO12 meet in what promises to be a cracker of a game.

Nothing quite set the pulses racing as meetings between Munster and Leinster no matter where the venue and besides the far from irrelevant quest for match points there's the obvious match ups throughout the park.

There's the Keith Earls versus the great man himself – and great to see Brian O'Driscoll back – then the Felix Jones and Rob Kearney contest at full-back and of course the Maestro and the Young Pretender, a contest that worth the entrance money alone.

Leinster are the form team, have lost just three games in the league, and despite protestations to the contrary from their own camp, they go into this game as favourites and as the side with the most to lose.

They are eight points clear but after today still have to go to Ravenhill and Rodney Parade, two places that will not give way points handy.

They also have a full strength squad to choose from whereas Munster are without key players in Paul O'Connell, Donnacha Ryan, Denis Hurley and Conor Murray never mind the likes of the long term injured, Doug Howlett, Denis Leamy and Niall Ronan.

Nevertheless they wont wont use that as an excuse and will believe that their best performance will be good enough to get something of this game.

Munster Way Off The Pace

Even though this top of the table RaboDirect PR012 clash was tied nine points apiece with twenty seven minutes to go it was no great surprise that Leinster ended up comfortable 18-9 winners, at a packed Thomond Park Stadium

They were the better side for most of the evening and would not have been flattered if their winning margin had been greater. Both Rob Kearney and the excellent Isa Nacewa came close to scoring tries while Munster never really looked like crossing the opposition line.

And while Munster were the architects of their own downfall in an error littered performance, the introduction by Joe Schmidt of Cian Healy, Richardt Strauss, Leo Cullen and Sean O'Brien tipped the balance of this game Leinster's way.

Munster's set piece didn't perform anywhere close to where it needed to be and hard won possession was coughed up far too cheaply. Nor did Munster offer any great threat behind the scrum, reliant once again on Ronan O'Gara to harvest their points.

He started off with a penalty that came back off the upright in the 13th minute, ended with a three from five return and saw his late effort to secure a losing bonus come to nought when his drop goal attempt drifted wide.

His opposite number, Johnny Sexton ended with a 100% return before departing with a sore calf in the 60th minute to be replaced by Ian Madigan whose late drop goal ensured that Munster were denied

All in all then, a very disappointing night as Tony McGahan acknowledged afterwards. "It was certainly nowhere near the performance we expected of ourselves. It's a very disappointed bunch of players down there in the dressing room right now. And very hard to explain that performance." he said while agreeing that a reprise of that display in a week's time against Ulster, "simply will not do."

Munster maybe enjoyed their best period at the start of, and then the end of the opening half. But too often they turned over ball and lost whatever momentum they'd managed.

Sexton gave Leinster the lead in the 9th minute when Munster were penalised for collapsing the scrum and after the one that off the upright four minutes later, O'Gara opened Munster account after Sean Cronin was penalised by referee Nigel Owens.

Peter O'Mahony was done for going off his feet and Sexton kicked Leinster in front and he extended that lead four minutes later when the Munster front row was again penalised.

Two minutes into the restart Owens lost patience and sent Horan and Mike Ross to the bin and in was this period that Munster another bout of dominance resulting in two O'Gara penalties to tie the game 9-9.

Those expecting Munster to drive on were to be disappointed however.

Schmidt sent on the replacements and Leinster basically took control. Nacewa almost got over from a chip 'n chase but penalties from Sexton and replacement Fergus McFadden and then that drop-goal from Madigan ensured Munster took nothing from this game.

They can have no complaints. 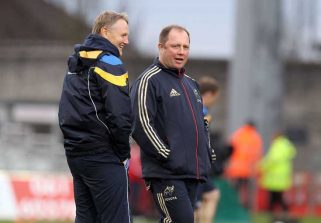 Munster Way Off The Pace