Could Be A Thriller At Ravenhill

The RaboDirect PRO12 meeting of Ulster and Munster this evening in Ravenhill (7.05) will tell us a little more about both sides and could also provide the expected 10,000+ crowd with a real cracker of a contest.

Both sides are two from two, both are in the process of inducting their internationals and both have shown a propensity to throw the ball about at will and with purpose.

And both have New Zealand coaches though new to this environment have already made a positive impression with players and supporters alike.

Mark Anscombe makes seven changes to the side that started here against the Ospreys last time out and that includes the presence from the off this time of Stephen Ferris – winning his 100th cap – Tom Court, John Afoa, Andrew Trimble and the youthful half-back pairing of Paul Marshall and Paddy Jackson.

Rob Penney on the other hand confines his changes to just three and all in the pack where Dave Kilcoyne comes in for Wian du Preez and BJ Botha starts ahead of Stephen Archer the player Botha replaced in the closing stages of the Treviso game.

The only other change sees Donncha O'Callaghan, not surprisingly after his tour de force against Edinburgh in the opener, preferred as partner to Billy Holland who is another enjoying a rich vein of form.

Last weekend Anscombe was able to spring his marquee players from the bench to good effect and tonight Penney has Conor Murray, Ronan O'Gara and Keith Earls in reserve and all will be introduced at some stage though there is the suspicion the Kiwi coach is confident that when he calls on them it won't be to do a rescue job.

A cracking contest in front of a 10,000+ audience produced the predicted narrow outcome with the home side prevailing 20-19 to maintain their unbeaten start to the raboDirect PRO12 campaign.

And it was a game that could have gone either way as Munster enjoyed the better of the first half exchanges and Ulster dominated for large parts of the second.

Although Jared Payne created two clear cut try scoring opportunities, Munster were full value for the 16-6 interval lead they enjoyed and although they saw that whittled away and then found themselves trailing by a point they displayed enough composure and verve to get Ian Keatley into position for a drop goal that he took superbly.

And again there was commitment aplenty in the end game as they trailed by a point and came looking for the score, any score, to snatch victory.

That they didn't manage too owed as much to outstanding Ulster discipline in defence with each and every Ulster on high Rog Alert as Laulala's 70th minute replacement looked to find the space to have a drop.

Ian Keatley had Munster nine points clear after he posted a 12th minute drop-goal, a lead that was just reward for Munster's enterprise with James Coughlan and Luke O'Dea particularly prominent and Donncha O'Callaghan laying down a very clear marker to the watching Irish coach

Paddy Jackson then booted over two penalties before Munster constructed a cracking try for Keith Earls.

It started when Coughlan – injured in the process – made serious ground gain on the left and Duncan Williams spread the ball right. Deft hands from Casey Laulala had Denis Hurley galloping clear and his delightful inside pass to Earls, on in the 25th minute for the injured O'Dea, ended with the try close to the posts.

Jackson reduced the gap with a 43rd minute penalty and converted the try that appropriately came from Payne during a period of intense Ulster pressure that would have yielded more but for the courage and commitment of the Munster defenders.

But Munster soaked it all up and worked Keatley into position for the drop goal and the lead. But Jackson had the final say with his 67th minute penalty and in the end Munster were denied by the type of aggressive defence they themselves had displayed earlier on. 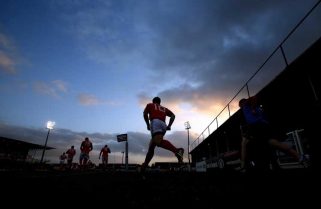