Munster set out today on the first step of a three week block that could go a long way in determining their fate in this season’s RaboDirect PRO12.

They’re in Wales for the game against Scarlets, the side directly above them (by one point) and secure in the knowledge that a win would put them into the top four ahead of the trip next weekend to Italy (Italy).

After these two weekends on the road it’s home to Ospreys whose defeat last night in Galway presents the opportunity for Munster to leapfrog them in the table.

They have just one change from the original selection, Damien Varley forced to withdraw having failed a late fitness test (knee), Sean Henry providing the cover to first time skipper Mike Sherry.

With Ronan O’Gara back from international camp Ian Keatley is switched to full-back and another returning international, Donncha O’Callaghan partners Ian Nagle in the second row with Billy Holland slipping to a bench that includes Casey Laulala who is back after a sojourn at home in New Zealand..

Scarlets also have internationals back in the shape of Liam Williams and Josh Turnbull with coach Simon Easterby making three changes to the side that started against Connacht here last time out.

His side number Ospreys and Leinster among their victims at Parc Y Scarlets and Easterby in recognising the importance of tonight’s fixture said. “It’s tight at the top of the table, so this game is a huge one for both sides as it’s a chance to take points from each other. It was a good performance last weekend in Galway, but there’s still a lot of work to do and we have to back that up with a performance this weekend.

"But we’ll have to improve if we’re to get a result against Munster tonight.”

And lest there be any doubt about the merit of the Scarlets win, Munster's scored seven of their ten point total in the finals seconds of a game that Scarlets controlled for near enough the entire second half.

They led 9-3 at the break thanks to three Owen Williams penalties and the twenty year old out-half, who went on to win the Man of the Match award – probably just ahead of his half-back partner Aled Davies – added a further nine second half points courtesy of two penalties and a neat drop goal.

The first half was a cracking contest with both sides prepared to fling the ball around at every opportunity that saw end to end stuff for the 7124 attendance to enjoy.

O'Gara was short from half way in the opening minute while Williams converted a slightly shorter effort to give his side a three point lead after 14 minutes. Then, like his opposite number, Williams came up short with a 56 metre effort after Jacobie Snyman had sacked Duncan Williams at a lineout but made it six nil five minutes later.

Munster came under severe pressure when scrum-half Davies breached their defence on half way to send first Phil John and then Rob McCusker galloping through and shortly after it needed a decisive Paddy Butler tackle to end Andy Fenby's run.

O'Gara who had seen an earlier effort come back off an upright finally got Munster on the board but Williams added a 39th minute penalty for a six point interval lead after the home side had withstood a bout of pressure inside their own 22 started when Mike Sherry made good inroads on the left hand side.

Four minutes into the restart Johne Murphy was penalised for some 'afters' though neither referee Dudley Phillips nor his assistant paid heed to what caused that reaction and when Munster were marched back a further 10 metres for backchat Williams lined up the penalty but surprisingly drove it wide of the right post, his only miss of the night.

He got back in the groove in the 49th minute and after O'Gara missed from in front, Sherry was shown yellow and while he was in the bin Williams fired over a penalty and a drop goal to seal the outcome.

Munster to their credit did come looking to salvage something but Denis Hurley's try was too late to affect the end result. 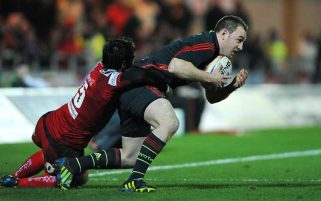