With some of their international contingent joining up with those who had the benefit of that outing against Leicester Tigers last weekend, Munster will be looking to give themselves the perfect boost against Gloucester tomorrow evening in Musgrave Park (7pm) ahead of the Magners League opener a week later.

Although beaten 17-13 by a full strength Tigers side there were loads of encouraging signs that Tony McGahan's squad are well equipped to deal with the challenges that will be presented in this World Cup season when the they will be without their international contingent for long periods.

Some of those however will add strength to the side for the clash with a Gloucester outfit that impressed in the Liberty Stadium win last week and they will be led again tomorrow by Luke Narraway who scored a try in that 24-14 victory. Prior to that the west country club saw off the challenge of Scarlets at Kingsholm but reserved their luminaries for the Ospreys match and retain much the same squad for this trip to Cork, obviously anxious to end up with a 100% return from their pre-season games.

To that end their pack in an all-international unit with one exception, prop Pierre Capdevielle the vastly experienced former Clermont Auvergne player while Rory Lawson will pull the strings from scrum-half with former England Under 21 star, Tim Taylor, a product of the Leicester Tigers Academy, outside him at fly-half.

The Cherry and Whites have pace aplenty out wide with a back three of Olly Morgan, veteran James Simpson Daniel and former Wasp Tom Voyce while Tim Molenaar and Samoan international Eliota Fuimaono-Sapolu provide the umph in midfield.

All the above will be more than familiar to Johne Murphy – who makes his debut for Munster – and his centre partner Sam Tuitupou who will have compatriot Doug Howlett alongside.

Ian Nagle gets his opportunity to stake a claim, partnering Donnacha Ryan in the second row with Alan Quinlan – just two caps shy of 200 competitive outings for Munster – packing down on the opposite flank to his fellow Clanwilliamian Tommy O'Donnell with Denis Leamy anchoring the scrum, as he did so impressively a week ago. 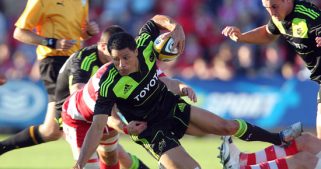