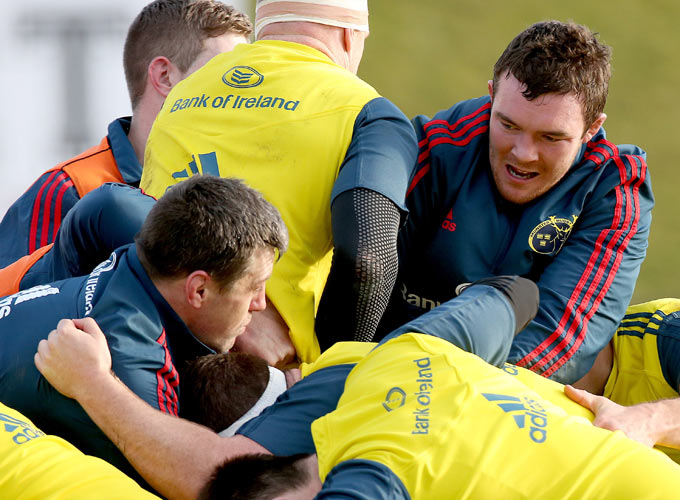 Peter O’Mahony took a full part in the final squad training session in Cork yesterday and has been named to lead the side out in Thomond Park on Saturday against Toulouse in the Heineken Cup quarter-final at 1.30pm.

O’Mahony was also named in last weekend’s squad but was a last minute withdrawal due to a hamstring twinge, and after successfully following a modified training schedule this week the talismanic back-row is included in Penney’s starting XV.

The only other change to the side sees James Downey renew his centre partnership with Casey Laulala.

With the returning O’Mahony, CJ Stander moves to the replacements while John Ryan takes the place of James Cronin who is ruled out with an ankle sprain.

Please note this game is completely sold-out and the match-day information for travelling supporters can be found here. 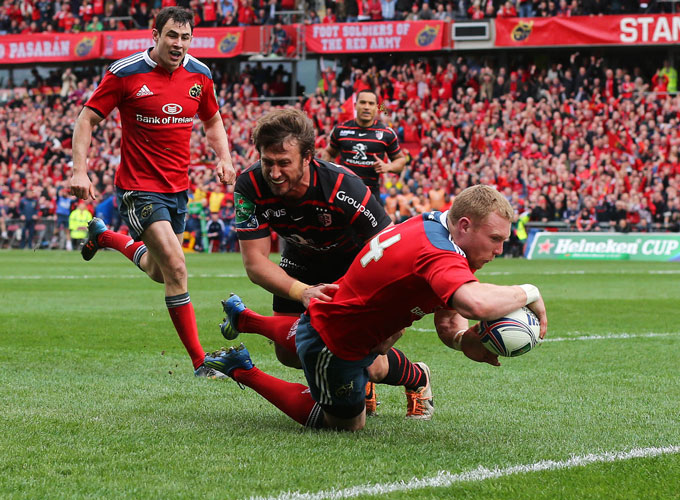 Munster are into the semi-finals of the Heineken Cup after a magnificent six-try 47-23 win over Toulouse in front of a packed Thomond Park on Saturday afternoon.

The rolling maul was a key component of the win with magnificent defence and deadly finishing playing no small part in the side’s best performance of the season.

It was a frenetic opening with Munster playing against a strong wind and Peter O’Mahony hurt his shoulder making an early steal in the line-out but, luckily, the Munster captain was able to continue.

The home side dominated much of the early possession with some ferocious hits coming in from Toulouse and Rob Penney’s side capped a magnificent start with Earls’ try in the fifth minute. The Munster pack pummelled the Toulouse line before Keatley went wide to Zebo and the winger’s looping pass found Earls on the right flank and he finished expertly in the corner.

Keatley’s difficult conversion from the right sailed through the posts and Munster had made the perfect start.

Toulouse hit back immediately with a simple Luke McAlister penalty making it 7-3 after a Munster offside.
Keatley kicked his first penalty in the 16th minute after a threatening Munster maul was dragged down by Toulouse and Munster led 10-3.

O’Mahony eventually succumbed to the shoulder injury he pick up early on after 18 minutes with South African CJ Stander replacing the talismanic Cork man.

Another superb rolling maul moved Munster within inches of the Toulouse line in the 20th minute and Conor Murray nearly went over for the second try but the scrum-half was held up by two Toulouse defenders.

Munster won another penalty off the resulting five-yard scrum and Keatley stepped up again to make it 13-3 with 22 minutes played.

McAlister kicked his second penalty just short of the half hour after Stander went off his feet to reduce the Munster lead to seven.

And the former New Zealand international made it 13-9 seven minutes before the break after Munster were penalised at the scrum as the French side began to build up a head of steam.

Munster had the final attack of the half but the Toulouse defence stood firm and the game was finely poised after 40.

Within 80 seconds of the restart Munster scored their second try through Kilcoyne. The rolling maul was once again key and Murray was stopped just short of the line with Kilcoyne powering over. Keatley was spot on again to make it 20-9.

Toulouse very nearly scored their first try almost directly from the restart after a break from scrum-half Jano Vermaak but Yoann Huget was bundled into touch.

Shorthly after, Earls pounced on a mistake in the Toulouse midfield to break clear and hack the ball up to the ‘22’ and the retreating Toulouse defender was forced to kick the ball into touch.

The rolling maul was effective yet again and Damien Varley broke off and made great inroads, Murray’s sniping run nearly yielded a try yet again but substitute Stander bulldozed his way over with Keatley adding the extras to push Munster into a 27-9 lead.

Kilcoyne and Yohan Montes were yellow-carded by referee Nigel Owens in the 49th minute after persistent infringement in the scrum and Keatley missed his first penalty in the 52nd minute.

Toulouse scored their first try in the 54th minute after a superb solo run by Hosea Gear with substitute Lionel Beauxis wasting no time over the conversion and the score was 27-16.

Keatley kicked a difficult penalty from the left after Munster got the upper hand in the scrum just past the hour to make it 30-16 as the hosts looked to close out the game.

Laulala scored the fourth try in the 63rd minute to edge Munster closer to the win. It all started when O’Connell disrupted in midfield with Earls cleverly chipping through and forcing the ‘22’ drop-out.

Toulouse tried the short drop-out to regain possession but substitute Duncan Casey dived on the ball, Murray whipped the ball out wide and Tommy O’Donnell gave the telling pass with Laulala running over almost unopposed.

Keatley pulled the conversion slightly left and Munster had a 19-point lead with a quarter of an hour remaining.

Toulouse kept going and went over for their second try in the 72nd minute as Joe Tekori powered his way over from close range with Beauxis landing the conversion to make it 35-23.

Zebo sealed the win with a brilliant finish in the 75th minute; set up by superb hands from Jones after a steal from man-of-the-match Stander.

The win was capped off by an O’Connell try in the final minute with Keatley adding the conversion to seal a memorable 47-23 win.

Peter O'Mahony will have a scan on his shoulder injury in the next 48 hours. 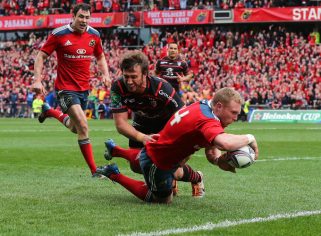