An all new front row sees Dave Kilcoyne and BJ Botha pack down on either side of Kevin O’Byrne as the 23 year old UL Bohs man makes his second PRO12 start.

Dave Foley retains his starting position in the second row alongside Billy Holland who comes in to make his fourth league start of the season.

Following a 16 minute appearance from the bench last weekend, Peter O’Mahony returns to the starting line-up and will captain the side at 6. Tommy O’Donnell remains at 7 with CJ Stander switching to 8 for the Round 6 encounter.

In the half backs, man of the match against Leinster – Conor Murray will again start at scrum half with JJ Hanrahan promoted to the startling line up in the 10 channel.

Ivan Dineen and Andrew Smith form the centre partnership at 12 and 13 respectively, while Gerhard van den Heever comes in to join Simon Zebo and Felix Jones in the back three.

The replacements see the inclusion of Argentinian hooker Eusebio Guinazu for the first time with Donncha O’Callaghan and Johne Murphy also returning to the matchday squad.

Tickets are available to buy online here and from the Munster Rugby Ticket Offices in Thomond Park and Musgrave Park today and tomorrow from 10am. Tickets can also be purchased from the Mobile Ticket Unit in the Fanzone Plaza on Friday from 2pm and from the West Stand Ticket booth from 5.30pm. 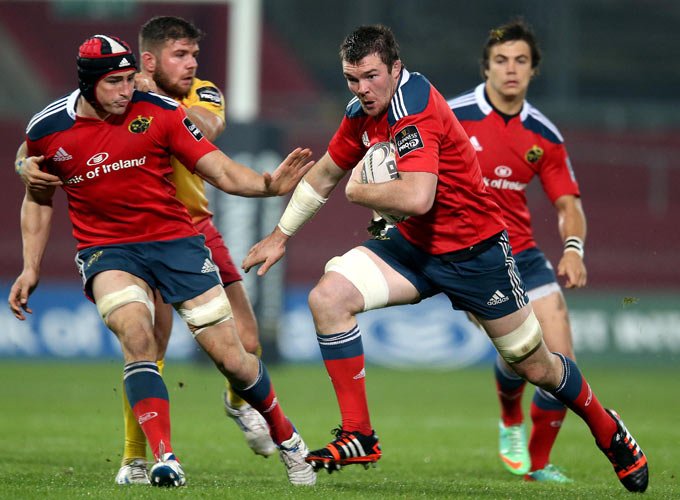 Munster recorded their second victory in Thomond Park this season as they defeated the Scarlets 17-6 tonight.

In an important week for the club, with the trip to Sale only eight days away the win came courtesy of a try from Andrew Smith after 25 minutes but there should have been more.

The Welsh side never looked like an upset and with just one win in their last ten trips away from Parc Y Scarlets it doesn’t get any easier for them as Toulon wait in the wings at Stade Mayol next weekend.

Scarlets got the first score in the second minute when Rhys Priestland spotted a penalty advantage and let fly with a drop-goal attempt however the result was uncertain until TMO Seamus Flannery awarded the points.

Munster could have drawn level immediately after when Tommy O’Donnell forced a penalty but JJ Hanrahan was off target.

Hanrahan made amends and leveled matters after 21 minutes, the Welsh were pinged because they didn’t roll away with Munster on the offensive and this time the UL Bohs clubman made no mistake.

It wasn’t long before Simon Zebo was in the thick of things, he broke the gain-line after a pop pass from Conor Murray. Munster pilfered their way forward and found a way through the Scarlets resistance, Murray relayed to Hanrahan who flashed it out to Andrew Smith who got over in the corner.

Hanrahan missed the touchline conversion and then Munster’s ill-discipline gifted Priestland the opportunity to narrow the advantage but he also missed the target and the scoreboard read 8-3 with half-an-hour played.

Another penalty came Priestland’s way when Johne Murphy didn’t release and this one hit the post but the Welsh fly-half finally punished Munster two minutes before the break to make it 8-6 at half-time.

Munster made the ideal start to the second-half when they won a penalty off a scrum and Hanrahan stroked over a difficult kick to give them a five-point lead for the second time.

Joe Snyman strayed offside to give Hanrahan another chance to add to his tally, that went astray but he couldn’t miss when Liam Williams infringed and it was 14-6 with 49 minutes on the clock.

The play soon became disjointed as Scarlets brought on an entirely new front row and they pushed their way up towards the Munster line only for a huge kick from Zebo to relieve the pressure as Liam Williams knocked on.

Hanrahan made it four from seven on the night as he extended Munster's advantage just after the hour with a penalty.

Then the Scarlets rearguard parted as Pitman failed to control at the base and O’Donnell sprinted clear, he offloaded to Peter O’Mahony who tried to put Zebo in the clear but he lost it forward.

Munster were still well in the ascendency but never kicked into fifth gear and despite the fact that they forced two decisions from the TMO late on, Munster never got their second try. 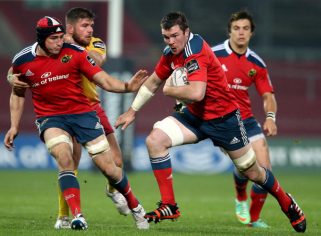