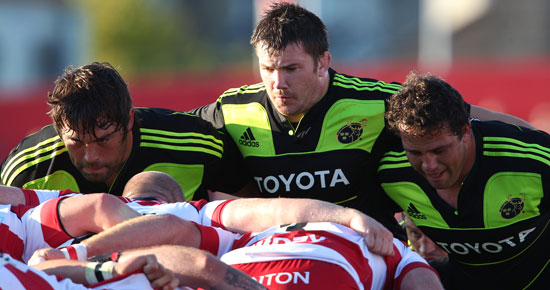 The preparations been done, the phony war games against Leicester Tigers and Gloucester dispensed with and tomorrow the business end of the season begins with the visit to Musgrave Park of new Italian side Aironi Rugby.

Munster coach Tony McGahan, quite understandably admits to knowing very little about the Magners League newcomers yet cautions that they'll present, "a very very strong challenge. Their side contains Test match players with a lot of experience and I believe they'll see this game as an opportunity to make a really strong statement of intent."

Those players McGahan mentions include Fabio Ongaro, Salvatore Perugini, Carlo Del Fava, Quintin Geldenhuys and Tito Tebaldi who all featured in the Italian squad that played Ireland in the RBS Six Nations earlier this year, while full-back Julien Laharrague and Ludovic Mercier, both former French internationals, will be more than familiar to McGahan and his squad and bring a wealth of experience and no small threat to the mix. Also included in the Italian side are former U20 internationals Roberto Quartaroli and Andrea De Marchi.

The general consensus would be that like all Italian sides the battle up front will be key but Munster hooker Damien Varley doesn't expect it to end there. " I think certainly it will be a key area but from the little we've seen from their pre season friendlies they look to have backs who are comfortable on the ball and like to take it on."

Varley, who made his international debut during the recent tour to New Zealand/Australia insists a good start to the season is important. " Last season we had good form in our pre-season games but fell off against Glasgow in the opening round and struggled for awhile after. That was disappointing so this time around we're looking to improve on that."

Like everyone else Varley believes that it's what his side do that will determine the outcome. "We must be aware of the threat they (Aironi) pose. No, we haven't had a lot to work on in terms of video footage, they're a new franchise, but we only have to look at the quality of the players in their side to know it'll be a huge challenge. But we need to focus on our own performance, play the way we want and take it from there."

McGahan has left his backline untouched from last weekend but tweaked the forwards a little, bringing in an all new second row in Mick O'Driscoll and Billy Holland on this occasion. Donnacha Ryan, who partnered Ian Nagle last day, is moved to blindside wing-forward which means Aan Quinlan is kept in reserve while Niall Ronan comes onto the other flank and Denis Leamy binds the pack in the number 8 jersey and wears the captains armband for the third successive game. 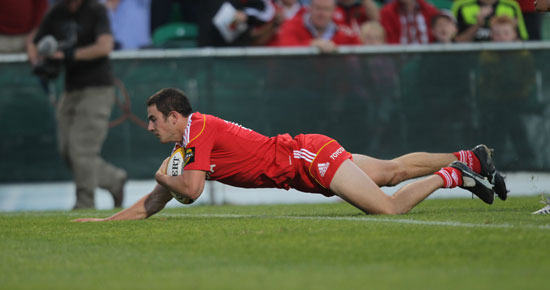 Munster’s bonus point 33-17 win over the Italian side Aironi at Musgrave Park gives them the best possible start to the Magners League.

Against an Italian side who showed they will do so much more than make up the Magners numbers, Munster might have been slow in establishing consistency but once they did, their performance achieved the clinical ruthlessness needed to dispatch the League newcomers.

And no, it wasn't plain sailing for the Denis Leamy led side by any stretch of the imagination. Aironi had a serious spine to their selection in French internationals Julien Laharrague at full-back and Ludovic Mercier at out-half, Italian internationals, scrum-half Tito Tebaldi and hooker Fabio Ongaro with the powerful Nick Williams at number eight.

It was Mercier who produced the touch of magic in the 33rd minute and that knocked any sense of complacency that may have existed from Munster supporters minds.

At that stage, Munster led 11-6 thanks to two Paul Warwick penalties – the first from over 40 metres – and a sweetly taken Felix Jones try off a clever pop pass from the excellent Peter Stringer.

Then with nothing seemingly on, and just inside his 22, Mercier delivered the deftest of chip kicks that was retrieved by Dylan Des Fountain who had his centre partner Roberto Quartaroli in support. The former Under 20 international's perfect pass sent Laharrague scorching for the line and the touchdown in the corner. Mercier missed the conversion but the gloves were most certainly off with little doubt now about the visitors talent or threat.

But as was to be the hallmark of their performance on the night, Munster responded positively. They worked their way upfield with Jones's pace to catch the Italian defence flat-footed and send the sides into the break 11 points apiece.

The Munster coach doesn't do histrionics but whatever he does at half time, his side responded. They immediately went on the offensive from the restart and within ten minutes were twelve points clear.

With Salvatore Perugini in the bin, it was the pack who orchestrated – after Doug Howlett and Sam Tuitupou's forays down the right wing had earned good field position – first RTE's Man of the Match Niall Ronan, burrowing over for Warwick to convert and then Tony Buckley adding a second, four minutes later.

Mercier kept his side in contention with a 54th minute penalty, a score that was cancelled out, two minutes later by a cool Warwick drop-goal.

Mercier was on the mark again but then we had Ronan's second try, created initially by a training ground move perfectly recreated. Howlett came into the line off his wing, Tuitupou running the decoy, and the Kiwi sent Johne Murphy racing clear. A last gasp tackle took the Kildareman down but the support arrived in numbers and at impressive speed and Ronan picked up to poach the clincher.

To their credit, Aironi refused to buckle and the game ended with them attacking the Munster line.But if you credit them for that, then heap credit also on Munster for the way they refused to yield, with the outcome and the bonus point securely in the bag. 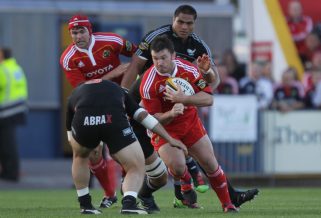 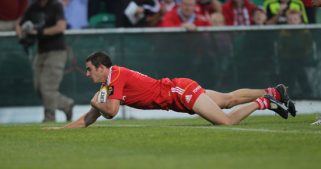