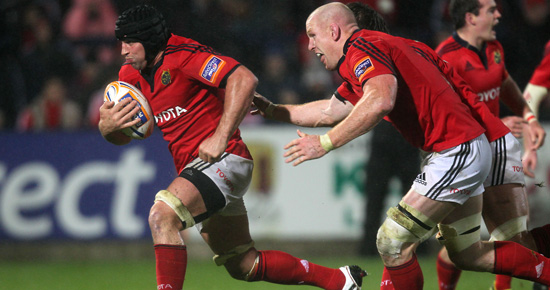 Go into your local bookmaker this morning and you’ll find Leinster odds-on favourites to halt their losing run against Munster when they take them on in the RaboDirect PRO12 game tonight (8pm).

Last time they met was in the final of the then Magners League in Thomond Park Stadium last May when the freshly crowned Heineken Cup champions were denied a unique double by a Munster side who ended the game with a penalty try for a 19-9 victory.

Prior to that Munster edged the April meeting thanks to a late late Ronan O'Gara touchline penalty, but up to then it had been all Leinster in the clashes between the sides since Munster had done a League double over their great rivals in 2008/2009.

Leinster don't play too many games at the Aviva, their RDS ground more than adequate to cater for their supporters on a normal day but when Munster come to town it's a switch to HQ and this evening game will attract an international size capacity.

Both camps are quick to point up the game's relative importance to the upcoming Heineken Cup. The likes of Jamie Heaslip, Cian Healy & Sean O'Brien get their first outing since returning from New Zealand but Munster's contingent all saw game time last week in Musgrave Park.

So it could be argued, though the bookies aren't convinced, that Munster are in a slightly better state of readiness, though they still look to be trying out combinations particularly in the back-row. This game will certainly give Tony McGahan and his backroom team a better idea of where they're at ahead of the Heineken Cup.

There's been little to choose between these two in the past. Games between the sides take on a life of their own and have become one of the truly great occasions of Irish rugby.

This one will once again be more than well worth the entrance fee although the absence of Brian O'Driscoll robs it of one of the greats of the game and it's to be hoped he will be back in action soon.

Too Little Too Late ? 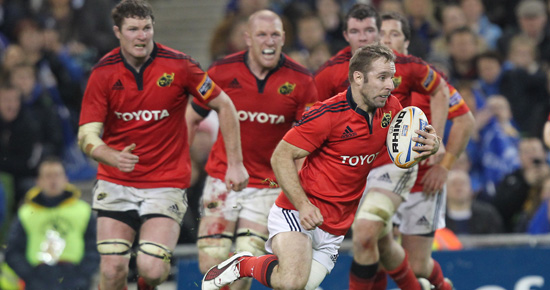 The much anticipated meeting of Leinster and Munster ended in a 24-19 victory for the home in a game that although producing very little classic rugby was nevertheless nothing short of enthralling from start to finish.

And at that finish in added time it was the home side who were clinging on for a victory that just minutes earlier had looked safely in the bag as they led by 12 points following Johnny Sexton's seventh successive penalty in the 61st minute.

Ronan O'Gara's first miss of the evening came shortly after Sexton's strike and left Munster needing tries to salvage something. The first came courtesy of a penalty try with less than three minutes of normal time remaining and then, when Leinster failed to manage a keep-ball exercise, O'Gara kicked for the line to offer his side one last gasp opportunity.

Clean off the top line-out ball hushed the massive home support and Tomas O'Leary, a 63rd minute replacement for Conor Murray, produced his trademark linebreak but his offload went forward and Munster were left with just the consolation of a losing bonus point.

Not much consolation whatsoever was the sight of Keith Earls departing the scene in the first minute with a knee injury that rules him out of this month's Heineken Cup games, Earls picked up the injury in a tackle as he ran back Sexton's kick off. He'll have a scan today to determine the exact extent of the damage.

If defence was the dominant aspect on the ground, the airwaves were the preserve of referee Pascal Gauzere's whistle, the Frenchman blowing shrill and often. His strict adherence to the rulebook led to any hope of continuity but did allow both Sexton and O'Gara up their kicking stats.

Sexton went seven from seven while O'Gara was four from five. Sexton's would probably have been eight from eight only for Rob Kearney's well struck 56th minute drop-goal when Monsieur Gauzere was playing advantage.

Munster trailed 15-9 at the break though it might have been worse except for a superb cover tackle from Lifeimi Mafi. That came at the start of the second quarter when Leinster had numbers on the left but Mike Ross, with Luke Fitzgerald on his outside, went for glory only to be minced by Mafi.

That was Leinster's clearest chance of a try and their next came in the second half when Isa Nacewa, stretched backwards to take a pass only to be bundled into touch at the corner flag by three Munster defenders.

It looked ominous for Munster once Leinster had moved into that 24-12 lead but the Munster response was encouraging and afterwards Tony McGahan when asked for the positives responded, "how we finished the game, our fitness levels. Our scrum was good and we showed plenty of character and skill to get ourselves back into the position we were in right at the end." 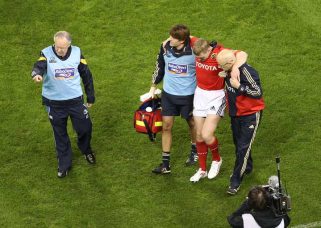 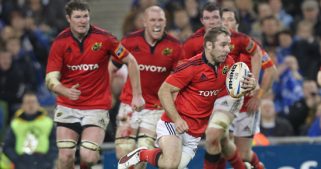 Too Little Too Late ?