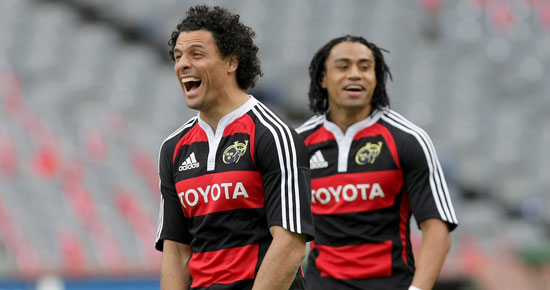 All was calm in the Munster team hotel, the splendidly placed Les Flamants Roses Hotel in Canet overlooking the Mediterranean, as team and management went about their final preparations for today’s massive clash with USAP.

But as far as the locals are concerned down in the shade of the Pyrenees there will be only one outcome to today’s encounter between their beloved Perpignan and Munster.

The very idea of anything other than a home victory isn’t given the slightest consideration by any of the local supporters who simply aren’t used to USAP losing at home. The last time they did, in this competition was when Lawrence Dallaglio led London Wasps to a famous victory but their record here is formidable to say the least.

Munster landed in Perpignan yesterday and following a quick foray into the Centre Ville made their way to the Stade Aime Giral for the routine walk-about. It was bitterly cold and very windy there yesterday evening but Sunday dawned bright and sunny and the forecast is for the day to remain that way although the wind is meant to increase ahead of the 4pm kick off.

The five changes Perpignan have made are not expected by them to cause any decrease in the tempo they promise to bring to today’s game while Tony McGahan keeps faith with the selection that secured victory last weekend. 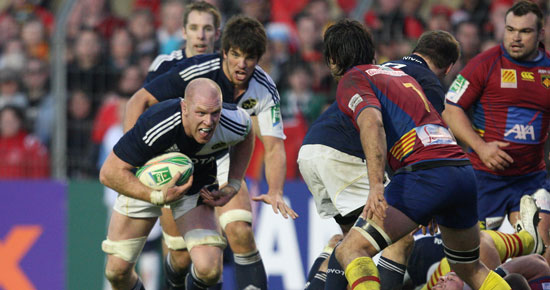 Munster’s other try came in the opening half after a sustained bout of pressure ended with Denis Fogarty blasting over in the 23rd minute with Ronan O’Gara’s conversion sending Munster in at the break holding a slender 10-9 lead. They might indeed have trailed at that juncture had David Mele not missed with a very kickable penalty in the last action of the half.

Two early second half O’Gara penalties had extended Munster’s advantage before the out-half was binned in the 51th minute but while he was sitting on the touchline Paul Warwick’s flat fast pass found Hurley on the switch inside and the powerful wing scored wide on the left. Warwick landed the conversion to put 14 points between the sides but Guilhem Guirado’s 66th minute gave the home side a glimmer of hope.

However that glimmer was extinguished two minutes later when replacement Jean de Villiers took O’Gara’s pass to bust the Perpignan cover and then accelerate away for the try that O’Gara converted.

With the home crowd stunned into silence Munster added the final twist when O’Gara dinked a kick thru for Howlett to race onto for the bonus point try. 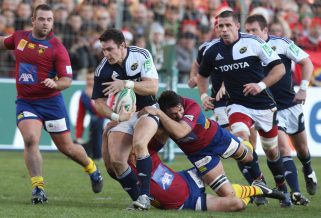 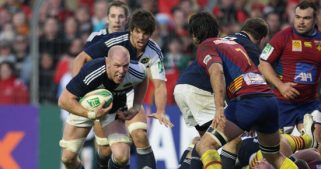