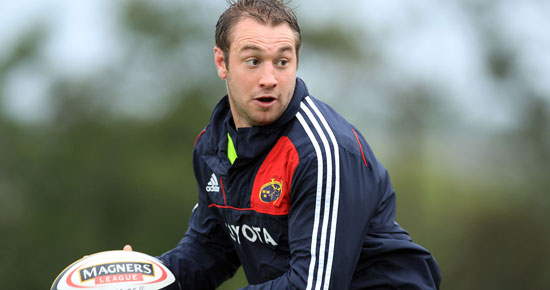 Munster take their unbeaten run to the Aviva Stadium tomorrow for the Magners League clash with Leinster, a fixture that is perhaps the most compelling in the rugby calendar in these isles.

And while the nouveau Leinster supporters will chortle about “the drive for five” the old schoolers, those who were there in the Ruddock/Glennon or before that Glennon/Callan years, will be a little more circumspect.

Leinster hold the whip-hand in terms of recent results and as Tony McGahan acknowledged there is no arguing with the stats, no hiding from history, nor could Munster have any quibble whatsoever with the merit of those Leinster wins.

However, it's not something that will over exercise Munster minds according to captain Denis Leamy. "No, not really. Our work this week would have been done primarily on the Glasgow game and trying to put right what we did wrong." he says.

"Obviously we'll have looked back on those Leinster games, but it's their recent stuff that is relevant to this game. They'll get no points for what they did last year. The points that are on offer are for this one."

Nor does Leamy see Leinster as the injured duckling based on their results so far. "They've had a slow start. We've had them ourselves. But if you look at the best bits of how they've played in those games you can see their quality. They're a good side and I wouldn't expect there to be anything in it tomorrow."

Leamy leads his side from the number 8 berth and will be opposed by Jamie Heaslip who is already being touted as the successor to Brian O'Driscoll as Ireland captain while Niall Ronan holds off the challenge from David Wallace for the number 7 vest.

Ronan has been in great form to date and with Wallace having just 60 mintes of rugby under his belt, the decision to go with the Drogheda man makes sense.

McGahan keeps faith with the backline who delivered the bonus point win in Firhill last weekend where Johne Murphy celebrated his return to the wing – after a stint in the centre – with two tries. 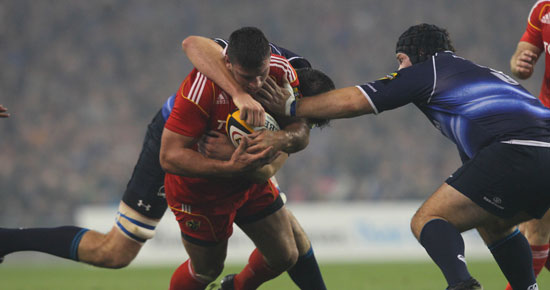 A 70th try from Brian O’Driscoll brought Munster’s unbeaten start to the season to a crashing end in the splendid surrounds of the Aviva Stadium on a wet Saturday evening.

At that time Munster held a 9-6 lead but the score from the immensely impressive Leinster centre came at the end of a period of constant pressure and it wasn't the first time the home side had breached the Munster defensive line.

A little earlier Luke Fitzgerald went slaloming through only to be denied by a superb on the line Johne Murphy cover tackle. In the opening half Isa Nacewa raced deep into the Munster 22 having skipped past would be tacklers on half way and just failed to make the break count.
For their part, Munster created very little by way of comparison, Murphy coming the closest when he raced onto a kick ahead to see his add-on ricochet into touch.
O'Driscoll once more showed his worth, right at the end when Munster went wide off a close-in scrum, to wrap himself around the on-rushing Sam Tuitupou and snuff out the threat. Tuitupou carried well and produced some tremendous tackles throughout.

While they can have no quibble with the result Munster will know they contributed hugely to their own downfall.

Tied 3-3 at halftime, Munster lost Lifemi Mafi to a yellow card early in the second half for a high tackle, O'Gara and Nacewa traded penalties before the Munster edged his side in front with a 57th minute penalty.

Leinster however set out their stall in Munster territory and remained there until they had their reward, O'Driscoll taking an offload from Sean O'Brien to run in unopposed. Nacewa kicked the conversion to ensure Munster needed a try. It never really looked likely.

They did have the chances to alleviate that pressure but too often their attempted clearances fell into the willing hands of Robert Kearney, Nacewa or Luke Fitzgerald who were more than willing to run it back and with purpose.

Four points down and the clock ticking away Munster raised the siege. A late close-in line-out and two promising scrums were resisted, possession turned over and Leinster cleared their lines.

It ended a little bizarrely when, awarded a penalty just on half way, Tomas O'Leary kicked for position but instead of indicating a line-out referee Garces blew for full time.

Afterwards, Denis Leamy, gracious in defeat said. "I don't think we can have any complaints. We knew it was going to be tough coming up here. We said all along that form leading up to this and the talk that they weren't playing well wouldn't count. Fair play to them, they're a very good side. We knew that all along.

"Of course we're very disappointed. Something wrong if we weren't. But look, we always ask questions of ourselves. This raises a few more maybe. We'll take it on the chin. Get ourselves right for the game against London Irish." 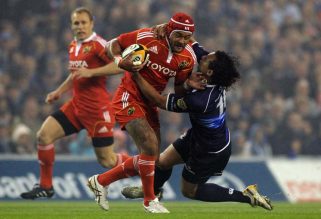 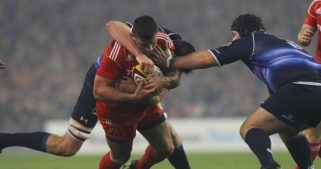