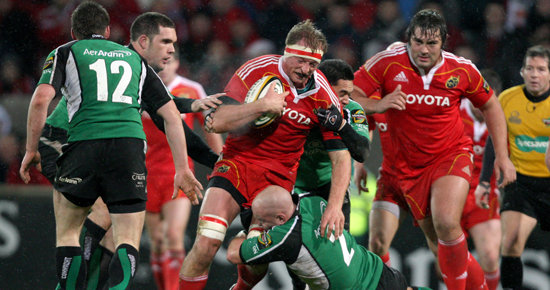 Munster face what will be one of their fiercest challenges at Galway’s Sportsground on Sunday.

Added to the traditional rivalry, there’s a huge amount at stake for both sides. Connacht are within touching distance of a place in next season’s Heineken Cup while Munster are now in a dogfight for qualification to the knock out stages. This is their third last game and arguably their toughest, with a home game against high flying Ospreys and then an away trip to Cardiff.

Team manager Shaun Payne put the task in context saying, "There’s three games left in the competition We can’t afford to be dropping any points at this stage. It’s Connacht at The Sportsground. Every year it’s a very close game and obviously we came a cropper last year.

Looking at Connacht current good heath he continued, "If you look at their recent form, I think they’ve been outstanding. The best I’ve seen them play since I’ve been here (in Ireland). I thought they were excellent against Leinster away and deserved to win that game. They did brilliantly to come through last weekend. They’re playing really very very well at the minute. The Sprtsground ? That’s never ever an easy place to get a result. This is a huge task."

Speaking about the Munster selection Payne said. " We won the game last weekend so we’ve a semi final coming up and whatever happens after that. There are vital League games to follow this one and obviously with a a challenge like this, the temptation is to pick your frontline team. But we have to take cognisance of what lies ahead and plan accordingly.

One thing for certain is that Munster will not be travelling to make up the numbers and what the newcomers bring to the party besides youthful enthusiasm is pace. Barnes and Zebo are lightning quick and Cusack is an out-half in the traditional mould, big and strong with a massive boot.

Deasy is no slouch either while Gleeson adds steel to a backline that will be marshalled by Warwick and Stringer, two of the best in the business,.

Up front Dave Ryan deputises for Marcus Horan and Billy Holland who has yet to play a poor game in the Munster shirt partnering Mick O’Driscoll who is enjoying another wonderful season in the autumn of his career. 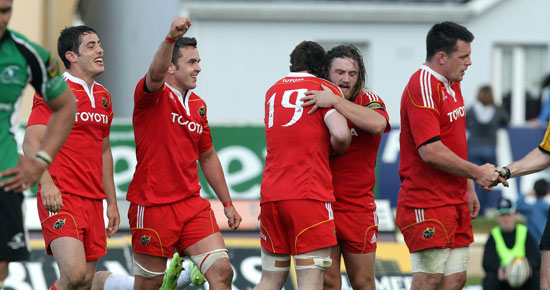 Away days in Connacht are often grim affairs played in atrocious weather conditions against opponents determined to give nothing soft away.

Last Sunday’s affair was conducted in brilliant sunshine that from every point of view had it taken place a week later would have provided the perfect lead-in to the sort of conditions – meteorologically and physically, that Munster can expect in San Sebastian.

Connacht, at the outset of a cruelly scheduled three games in seven days, put out their strongest possible side in their quest for the precious points that could take them into next year’s Heineken Cup.

Munster rocked up with a side comprised of a few gnarled veterans but mostly precocious youth and for the first time certainly in the professional era carried the mantle of underdog onto the well maintained Sportsground pitch.

In the end, it was the visitors who trooped off victorious but not before they had to endure a torrid end game as Connacht came searching desperately for the try that could have snatched them a one point victory.

Paul Warwick was the master puppeteer, selected at 12 but alternating between the outside cente and number 10. Two penalties from him had Munster in front by the 10th minute for a lead that was no more than they deserved.

However they were rocked back on their heels when Connacht broke from their 22 – after it has to be said a clear knock on went unnoticed – and ended up with O’Connor crashing over close to the posts leaving Ian Keatley with a simple conversion.

Munster had a stiff breeze at their backs and knew they had to capitalise but it wasn’t until the 30th minute they managed to do so. The move began with a great break by the impressive Nick Williams who swatted people aside on a 30 metre run into Connacht territory. When the Aucklander was finally hauled down his offload was taken on by Tony Buckley and then Warwick who made the space for livewire Niall Ronan to go in on the right.

Warwick tried a hopeful penalty from a metre inside his own half when maybe a ball into the corner might have reaped greater dividend and trailing just by four, Connacht went into the break probably the happier.

Full back Deasy provided the inspiration and execution for what was the crucial score. Gathering a diffcult kick on his own 22, he ran at Connacht’s advancing line, put up a glorious up-and-under, gathered it superbly despite the strong challenge form Gavin Duffy and was on Simon Zebo’s shoulder to score wide on the left. Warwick kicked a great conversion into the wind and Munster led 18-7.

But still with 35 minutes of the half to play Munster had the chance to close it out in the 55th minute, a succession of drives for the line halted before the ball was turned over.

They lost Zebo to the bin in the 57th minute for a deliberate knock-on and while he was coling his heels Naoupu scored to reduced the deficit to a single score.

From there on in Connacht tried desperately for the try that needed converting for victory. That they didn’t get it owes so much to the type of spirit O‘Discoll wrought from his side the night the Blacks visited Thomond Park. The work of the forwards, particularly at the breakdown was phenomenal, a fact acknowledged by a gracious Michael Bradley afterwards.

"They got the edge in the breakdown and held it for the entire match and that was obviously critical. We weren’t able to get quick ball for the majority of the match and found it difficult to go through the phases. It was a disappointing day and that was a big factor in it."

"We just couldn’t go through the phases, and when we did go into contact, we had to commit more numbers to the breakdown and then we just ran out of players. They just dominated us there today and we struggled to put through three or four phases of meaningless possession in the match."

Next up for Munster is Ospreys on Saturday in Thomond Park Stadium. 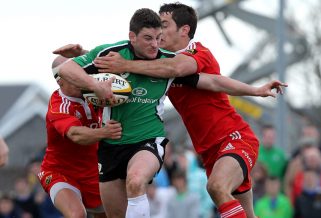 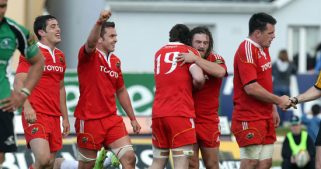