All The Pressure On The Blues 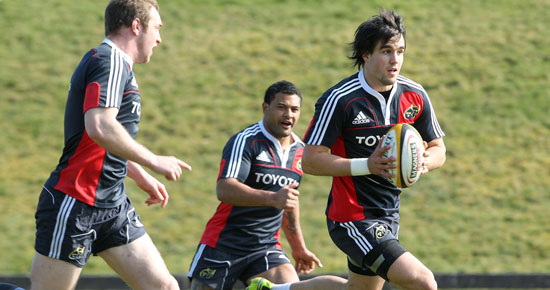 The competitiveness of the Magners League is such that Munster, despite being nine points clear are still not guaranteed anything at all given the sort of run-in they face in the coming weeks and in paticular this evening’s clash with the Blues of Cardiff.

Nevertheless, all the pressure is on the home side who simply cannot afford to slip up if they hope to nail down a place in the semis or what their bean-counters will require, a lucrative home semi-final spot.

And neither is a given.

After this evening's game, the Blues will take to the road for four of their remaining five games, three of those against neigbours, the other over in Galway which means nothing's guaranteed bar perhaps bonus points.

But then again, their Round 21 game at home to Benetton Treviso, is a racing certainty five pointer for the boyos in blue. Factor in that five and their game in hand and all of a sudden, the gap separating them from top spot could basically comes down to tonight's encounter at the Cardiff City Stadium.

That's how good this competition is.

Maybe thats why England (Inc.) should be thankful they snatched a RBS Six Nations title after a stuttering campaign where their Rose breasted best eventually, and some might claim, inevitably, were forced to play second fiddle (off key) to an Ireland Magners League, honed and hungry Ireland side.

Tonight though is a huge game. It's one Munster will not want to lose. It's one Cardiff Blues simply cannot afford to lose. 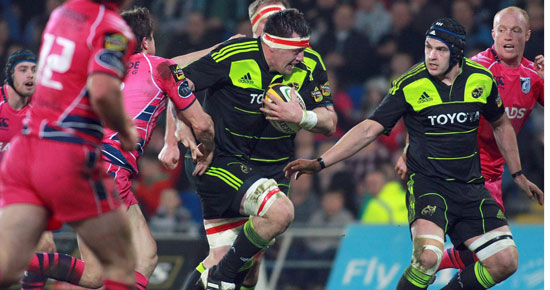 Munster’s one point win over Cardiff Blues, their first in the Welsh capital since November 2005, owed much to the side’s resilience plus tremendous defence in the closing stages.

It was a game they probably should have won with greater ease but failure to turn opportunity into scores, particularly in the opening half, meant they had to dig deep to secure victory. But dig deep they did and after Dan Parks missed with a snap drop goal attempt with less than ten minutes to go, they forced play back into the Cardiff end of the field and defended like dervishes as they had done all game.

Once again their set piece was solid, the rolling maul used to good effect and they created chances with sumptuous breaks form Keith Earls, Felix Jones and Man of the Match Paul O'Connell.

It was the Earls break in the 10th minute from a quick Johne Murphy line-out throw that led to the only try of the game, Earls brought down five metres short of the Cardiff line but the excellent Coughlan in support to crash over near the posts.

There should have been a second when Jones shredded the Blues defence and galloped for the line, just failing to find the supporting Niall Ronan with the pass out of the tackle that would have yielded another seven pointer.

And then again in the second half, Earls again using his blistering pass to scamper up the touchline with Doug Howlett and Murphy in support, Earls passed outside but Murphy, with little room to manoeuvre, tried ahead that was covered by Chris Czekaj.

Munster played all the football in that opening half yet found themselves just a point ahead (13-12) and a man down after Damien Varley (Sam Hobbs walked too) had been yellow carded in the 34th minute.

Parks gave the home side the lead with a 54th minute drop goal but Ronan O'Gara restored Munster's narrow advantage with a penalty six minutes later.

O'Gara then missed two penalties, one form distance, that might have eased Munster nerves but in the end game he produced a couple of touch-finds, one an exquisite effort left-footed from half way that bounced in just metres from the Cardiff line, that kept the Blues pinned down in their own 22.

In those circumstances, the Blues were forced to run the ball to gain territory but Munster were not in the mood to allow them that luxury and left the City Stadium with a fully deserved and morale boosting victory to take into the next game against Leinster in Thomond Park Stadium next weekend. 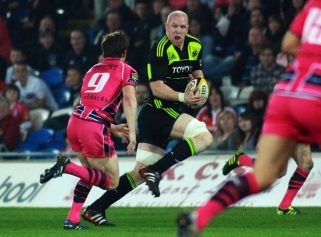 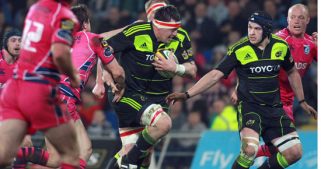