All The Pressure On Leinster 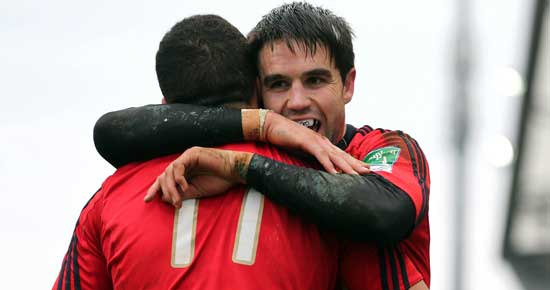 Leinster will arrive in Thomond Park Stadium knowing that a loss will almost certainly mean they’ll miss out on a lucrative ‘home’ semi spot.

And a measure of their intent can be gleaned by their full strength selection albeit without the injured Johnny Sexton who is given a further week to recover. Munster, with bigger fish to fry in a fortnight, rest a few of their leading lights, such as Ronan O'Gara, Wian du Preez and Donnacha Ryan.

Leinster are just two points clear of fourth placed Scarlets and the expected home win for Ospreys will see the title holders move to within a point of the side they beat in last year's final so really there's only one result that will suffice today for the D4 side.

It's a game that has some fascinating match ups most noticeably at out-half where Ian Keatley faces off with Ian Madigan, a place on the Ireland tour on offer while there are a number of players, all in the Munster red who can impress the watching Lions coach Warren Gatland.

The six day turnaround after that grueller in London, the high penalty count and the sheer determination of Brian O’Driscoll all contributed to Munster’s 22-16 defeat to Leinster at Thomond Park Stadium on a wet and windy Saturday evening.

It was a game that they should, certainly, could have won and that's not to take away one bit from the merit of the visitors win.

But in that Isaac Boss inspired Leinster end game, O'Driscoll is probably the only player who could have scored that match winner. Towards the later stages of that sequence of assaults on the Munster line, O'Driscoll had abandoned his out-wide berth to join the forward fray, snapping and sniping, making himself available at every possible opportunity before reaping the reward himself.

When Munster led 16-12 with the wind at their backs in the second half you'd have backed them to close the deal particularly given that they were bringing the same intensity as they's done the previous weekend.

However, crucially on the occasions they managed to set up shop close to the Leinster line they couldn't engineer a crossing while the visitor's one foray ended with O'Driscoll's score after 26 phases of play, 25 of those magnificently resisted by Munster's defence.

Leinster started the brighter and Rob Kearney was denied an early try by Donncha O'Callaghan who mananged to get hands under and prevent Kearney from grounding.

However the penalties started to ratchet up and Ian Madigan's impressive strike rate continued and he had his side nine points to the good with twenty minutes elapsed.

But Munster were working their way into the game, the scrum settling down, the line-outs going in their favour. Damien Varley worked a turnover close to the Leinster line, Conor Murray popped the pass to Ian Keatley on the blind and he nipped outside Mike Ross and inside Dave Kearney to score the opener.

Madigan lashed over a 34th minute penalty to put his side back in front at the interval.

Wind assisted in the second half Keatley had them in front with two penalties in five minutes the second from inside his own half. And with James Coughlan dominating his illustrious opposite number, the rampaging Tommy O'Donnell and Peter O'Mahoney on fire in the loose and Varley, Dave Kilcoyne and James Downey gaining good yardage, Munster looked certain to prosper further.

However credit to Leinster who hung in there and provided Madigan with the easy opportunity to narrow the gap with a 50th minute penalty. Even at that Munster had the possession and the position to close it out. But they couldn't manufacture a third try and in the end were made pay the price. 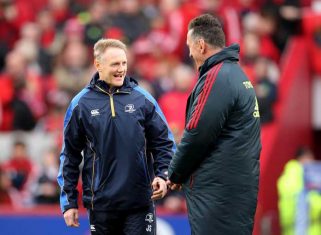