All Clear For Musgrave Park Encounter

Despite the recent adverse weather conditions there is no concern about the pitch at Musgrave Park ahead of this evening’s RaboDirect PRO12 clash with Connacht (5.45).

And thanks to its careful management by Facilities Manager Ian Dunne it continues to be one of the best playing surfaces in the country.

Both sides arrive this evening with contrasting ambition, the visitors hoping for a fourth successive win, the home side looking for a first win at fourth time of asking.

Encouragingly, last time Munster won was here against Edinburgh in mid January and even more encouraging is the presence in their starting line-up of Paul O'Connell and, on the bench, Niall Ronan.

The return of both is opportune as Munster go in search of much needed Rabo points and with the Heineklen Cup just around the corner.

The danger is of course that too much may be expected of the iconic O'Connell. With just 40 minutes of A rugby and 80 of AIL under his belt he is entitled to be way off the pace and we're not entitled to see the best of him until further down the track.

And that track is abundantly clear for Munster in terms of what's required for them to be involved in the plays offs.

As things stand they're chasing Ospreys and Scarlets and trail them by 11 points so nothing less than a win, in this their last game this season in Cork, will suffice.

Munster’s 22 points without reply victory over Connacht at Musgrave Park keeps their slim hopes of a play-off place alive after a morale boosting performance that was much improved on what’s been witnessed in recent weeks.

Perhaps it was the presence in the side of Paul O’Connell that provided the spark that saw them take control of this game almost immediately from the kick-off and put it beyond the visitor’s reach as early as before the close of the opening quarter.

O’Connell was at the heart of every good thing Munster did and opened the scoring with an 11th minute try off a neat Cathal Sheridan pass while his second row partner Donncha O’Callaghan put in an impressive shift as did Ronan O’Gara and Damien Varley.

And it was O’Gara’s clever cross-field kick in the first half that might have helped towards the bonus try had the bounce been a little kinder for Tommy O’Donnell who had a clear canter to the line.

As it turned out they could only manage three though they owned possession for most of the game and had three in the bank with half an hour to run.

Errors, that been kept to manageable proportions in the opening half, became much more prevalent in the second, but credit too to the Connacht defence, particularly in the closing minutes for keeping their line intact.

The positives as outlined by Rob Penney afterwards was the ability to build pressure through continuous phases a solid set piece and individual performances besides O’Connell et al of the likes of Sheridan, Ivan Dineen, O’Donnell and another returning from injury, Niall Ronan when he came on as a replacement.

O’Connell opened the scoring with a try after 11 minutes converted by O’Gara and Varley’s followed three minutes later.

If O’Gara totally miscued the Varley conversion he made no mistake with a penalty into the wind in injury time of opening half and his decision to spurn the easy three points on offer in the 50th minute paid dividends when Varley crashed over for his second try.

At that stage you’d have been given short odds of Munster securing the bonus but too often they gave their opponents easy outs but in the end after final dogged Connacht defence they had to settle for what they got. 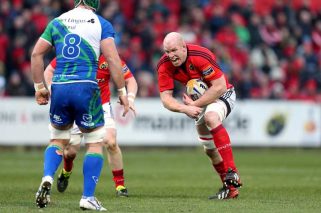